Potawatomi art, how it came to be 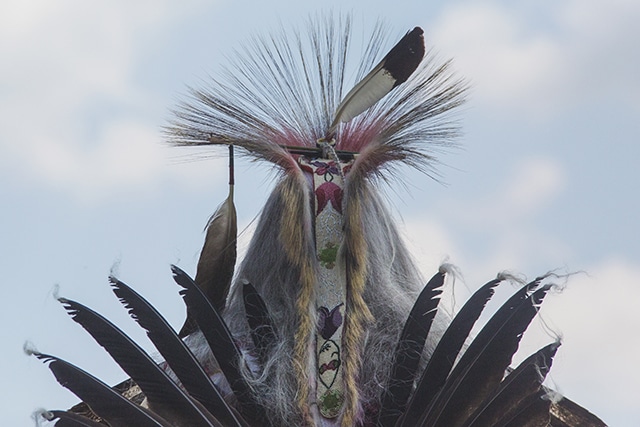 According to a 1973 art history book by the Flint Institute of Arts, archaeologists have excavated burial grounds in the Great Lakes area containing pottery, jewelry and ornaments indicating skilled artists and techniques prior to the arrival of the Europeans. The burial grounds date as far back as the 200 BCE to 500 CE Hopewell Indian era indicating that, regardless of the century, man’s way of making life better was to recreate the beauty of the world around him.

When it comes to traditional Potawatomi art, this theory may be justified. From spring to fall in traditional Potawatomi homelands like the pastures of Western Michigan, the hills and the countryside are ripe with budding wild flowers. In the craftsmanship learned in creating everyday materials and objects, art emerged. From the way the wigwams were constructed, to food preparation, to the use of dyes from berries, roots and plants, ordinary and practical objects became things of beauty.

According to Cultural Heritage Center director Dr. Kelli Mosteller, “though flowers may not seem like a manly thing, traditionally it is a dominant symbol of our Tribe and is very common for not just women but also men to have regalia with flowers and buds all over every piece they wear.” 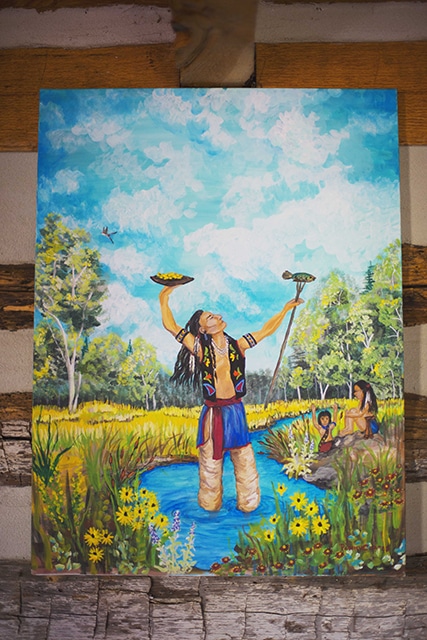 Art was a way of life for the Woodland Indians and each piece had a specific use. Some of the earliest pieces of Potawatomi art were rush mats, woven bags and quill work. All of these served a purpose in the everyday life of the Anishnaabe people, who also knew that the more elaborate the piece, the better chance of trading it for much needed goods.

Moose hair embroidery was an important source of income for Potawatomi looking to trade with French settlers, who marketed the highly desired object with Europeans. The heightened possibilities of this trade with settlers stoked competition among different clans and tribes which inherently heightened the creative and artistic expression of the Woodland Indians.

Along with trade and income, artistic expression was driven by ceremonial and religious purposes. Flutes carved with elaborate geometric designs of effigy’s had spiritual influence and were also seen as a means of the artist expressing themselves creatively.

Art in the Native American community tells a story no matter what the symbolism. For the Potawatomi, animals and plants from the forest were, and are still used to portray the world around them.

“In those days, you had to use the resources around you because that was the only thing you knew,” said Dr. Mosteller. “For the Potawatomi, we originated in the deep forest of what is now Michigan so all of our symbols do not exactly relate to what is in Oklahoma.”

Potawatomi did not begin using Western attire until much later than other tribes, meaning the tribes’ fashions are still held in high regard because of their uniqueness. To this day, regalia can be seen with symbols of deer, panthers, turtles and eagles. Flowers, buds, pine cones, feathers, elk’s horn and rabbits’ feet are also well worn symbols while Ottertail designs are typical on bandoliers and sashes, along with turbans made from the aquatic mammal. 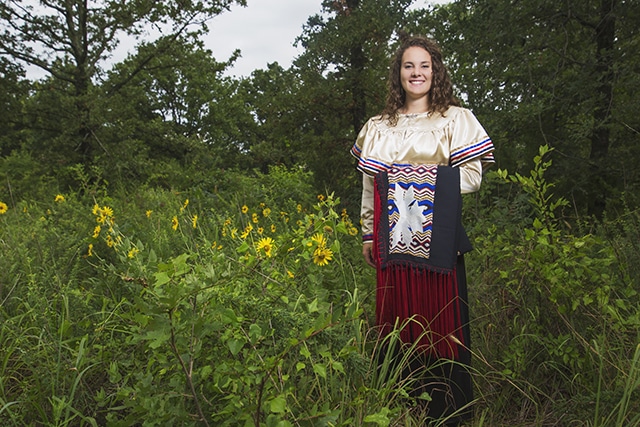 More symbolism for the Potawatomi comes from decadency of Clan. The Clan System in Native American culture helped divide and organize lineage. The Potawatomi clans range from beaver to bear, and crane to deer. Although the traditional family clan duties are dated, the symbolism is still present on regalia, art and in ceremonies. 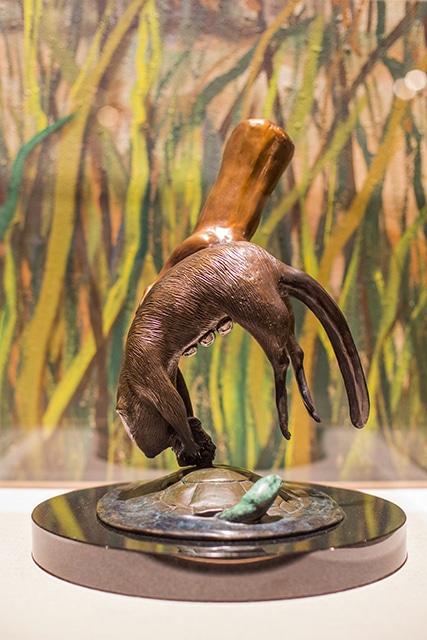 “Creation” statue made by Clyde Slavin.

Today, modern Citizen Potawatomi Nation art can differ, with artists like CPN’s Penny Coates and Margaret Zientek using symbolism and styles of the past with a modern touch. Other Potawatomi artists such as CPN’s Charles Clark, stick to a more abstract approach.

“Singing, dancing and drumming are other ways for Native Americans to express themselves,” said Dr. Mosteller. “This is not a hobby for us, it’s our heritage. As a Native American your identity is made by the way you express yourself and shown by the personalization of what you create around you.”
As the old saying goes, “art is everywhere,” and for the Potawatomi this couldn’t be more true.