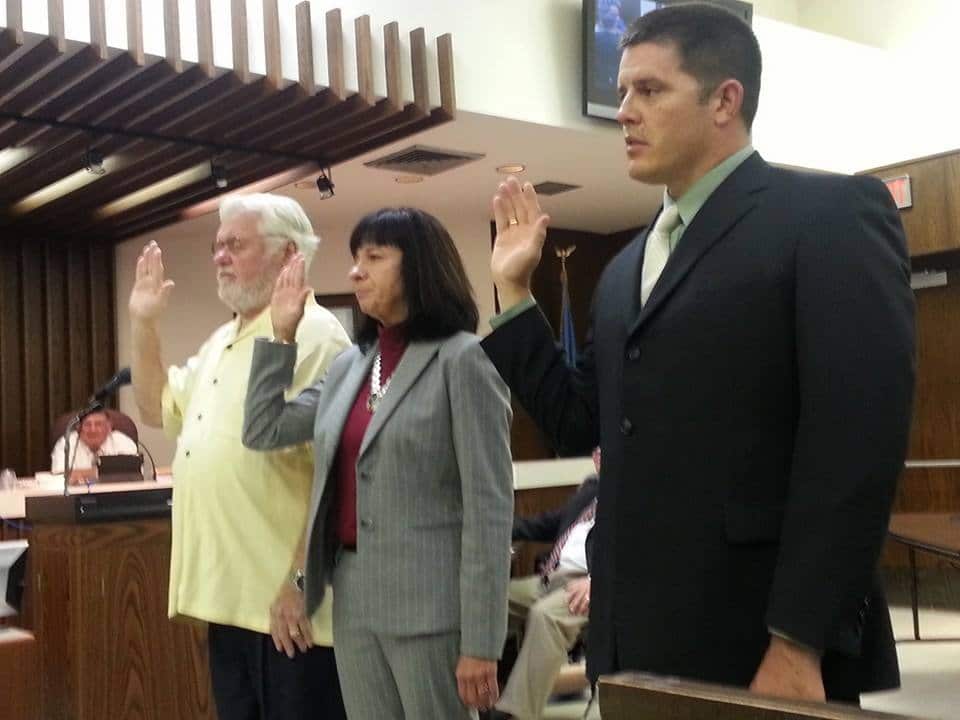 Editor’s note: The following is an updated version of this article which ran in the Oct. 2014 print edition of the Hownikan.

For many in Shawnee, Okla., the June 24, 2014 municipal elections were seen as a referendum on the city commission’s actions over the past year, including threats of litigation toward neighboring tribes. CPN member Michael Dykstra participated in the only competitive race, defeating Steve Smith, the sitting commissioner. Lesa Shaw and Gary Vogel were also two new faces on the commission following the June 24 election.

The new commissioners were not seated until Sept. 2 however, allowing incumbents an opportunity to wrap up the 2013-14 commission session. Commissioner Keith Hall, Vice-Mayor James Harrod and Mayor Wes Mainord, knowing their majority had only weeks left in office following the failed re-elections of commissioners Steve Smith and John Winterringer, ignored sentiment of the June 24 election and continued their anti-tribe agenda.

At the body’s July 7 meeting, Commissioner Hall made two motions intended to undermine citizens’ rights to petition their elected governing body. With support from Mayor Mainord, Vice-Mayor Harrod and lame duck commissioners Winterringer and Smith, two motions were passed regarding the procedures for detachment from the City of Shawnee. The items were subsequently placed on the Nov. 4 ballot. The first motion changes the current city charter to make any detachment request go before a vote of the people of Shawnee rather than the elected city commission. The second requires payment for 25 years’ worth of infrastructure improvements on any parcel of land successfully detached from Shawnee.

The city charter currently allows land owning citizens to petition the seven person city commission if they wish to detach their property from Shawnee. The logic of this procedure was best exemplified by private citizen Kevin Kalies, who spoke out against the measures during the July 7 meeting.

Hall and other anti-tribe commission members have allotted tens of thousands of city dollars over the past year in pursuit of litigation against tribal businesses like FireLake Discount Foods, which sits on federal trust land. The city believes tribal sovereignty does not apply to non-CPN shoppers at the store, and is demanding that the Tribe collect sales taxes on those individuals. This skewed interpretation of federal law as a means of attacking CPN, the largest employer in Pottawatomie County, has resulted in increasing mistrust of the Shawnee City Commission’s leadership abilities.

For CPN alone, the examples of this incompetence by the city continue to mount. In the months since the City of Shawnee first threatened to sue the Tribe, the Tribal CPN Tribal government has uncovered evidence indicating the December 12, 1961 annexation of Absentee Shawnee and Citizen Potawatomi Nation lands was done so illegally. At a March 24, 2014 meeting between city representatives and the Citizen Potawatomi Nation, Absentee-Shawnee Tribe, Sac and Fox Nation and the Kickapoo Tribe, Mayor Mainord questioned the loyalty of tribes to the United States, asking tribal representatives if they recited the pledge of allegiance.

Just days after that unsuccessful meeting, the City of Shawnee’s public utility crews unwittingly flushed an unmapped water line that ran beneath the CPN Cultural Heritage Center. The negligence caused extensive flooding damage to the building, with reconstruction efforts ongoing today as complications continue to arise from the original flood. It should come as little surprise that town citizens, including tribes, have become disillusioned with leadership from the likes of Commissioner Hall and Mayor Mainord.

Yet it is their right as land owners to secure the appropriate amount of signatures and paperwork, as required under Oklahoma state law, and petition for detachment from the city if they so wish. This is the principle that the anti-tribe coalition intended to undermine with the assistance of lame duck commissioners Smith and Winterringer at the July 7 city commission meeting.

6 Oct. 2014 (As of October 2014, the Commission declined to hear CPN’s petition to de-annex land from the City of Shawnee on the grounds that since CPN lands are held in trust by the U.S. Government, the signature of the Bureau of Indian Affairs is required to hear the petition. As of this time of writing, the Bureau of Indian Affairs has not responded to the Tribe’s petition request.)

At the Sept. 2 City Commission meeting, newly sworn in commissioners Michael Dykstra, Lesa Shaw and Gary Vogel were seated alongside incumbents Hall, Mainord, Harrod and Linda Agee. As one of the dissenting voices against the anti-tribe bloc over the past year, Agee added Commissioner Hall’s city charter changes to the night’s agenda to give the newly elected commissioners an opportunity to vote on issues they would deal with first hand.

In the discussion preceding the vote, Commissioner Hall again stated his belief that current circumstances dictated such a drastic change to the city’s charter, thereby sending any detachment request to the voters and not the elected commission.

“This is what this country is about,” said Hall. “I don’t want to make this decision for our people. It will affect our children’s children. If someone wants to de-annex Shawnee Mall, it should go to the people. Four people shouldn’t be able to be bought or bullied, this is un-American.”

In the ensuing vote, Dykstra, Shaw and Agee voted to repeal the city charter changes, while Hall, Harrod and Mainord voted for them. Newly seated commissioner Gary Vogel abstained from the vote without explanation, meaning that the two questions will go on the Nov. 4 ballot to Shawnee voters.

The city’s latest meeting was far more contentious. Ahead of the Sept. 15 commission meeting, Shaw introduced a measure aimed at defunding the New Mexico law firm advising the City of Shawnee in its proposed litigation. In response, Commissioner Hall added an agenda item that questioned whether there was a conflict of interest between certain members of the commission and local tribes. Shaw, a Choctaw, and Dykstra, a Potawatomi, are the only two city commissioners who are members of federally recognized tribes.

In a bizarre twist, City Attorney Mary Anne Karnes, who is responsible for legally wording the commissioners’ agenda items, apologized as the meeting began for misconstruing Hall’s original agenda item, which he clarified was directed specifically at the Citizen Potawatomi Nation, not all local tribes.

Chairman Rocky Barrett, a citizen of Shawnee, then addressed the city commission and asked why it was less offensive to direct the item at CPN specifically.

Commissioner Hall responded that he did not wish to offend the Sac and Fox, Kickapoo and Absentee Shawnee tribes, telling Chairman Barrett that his issue was solely with the Citizen Potawatomi Nation leadership.

Shaw’s agenda item was tabled until the commission’s next meeting on Oct. 6, while Hall’s was struck off by Mayor Mainord. Hall contended however, that he may add it to future meetings should the need arise.

Given their actions and words in recent months, it is increasingly clear that Commissioner Hall and his allies do not believe that fairly elected commissioners with tribal heritage should be allowed to decide on one of the most important issues facing the City of Shawnee today. It should be noted that there has been no speculation about Commissioner Agee’s conflict of interest, despite her opposition to the lawsuit. Though Agee is not a tribal member.

Dykstra and Shaw both campaigned on their opposition to the lawsuit against tribes; positions that were well known when Dykstra defeated a pro-lawsuit incumbent in the June election and Shaw ran unopposed.

Perhaps though, Shaw and Dykstra, like Agee, have studied the issue of tribal sovereignty and understand just where attacks on the principle will lead. So far, the only party to prosper from the anti-tribe bloc’s stance has been the New Mexico law firm hired by the commission who has made $100,000 on retainer so far.

These actions have largely succeeded in a vacuum, as the half-empty city commission chambers can attest. This is why it is vitally important that tribal members and city voters attend these bi-monthly meetings to voice their opinions. Shawnee citizens should reach out to their elected representatives to let them know about the continued efforts at disparaging commissioners based on their heritage. Now is the time to be heard.

6 Oct 2014: (Up for discussion as agenda items for tonight’s Shawnee City Commission meeting are possible action by the commission for campaign finance reporting, budget modification discussions for the retainer of the New Mexico law firm and consideration of a potential conflict of interest between commission members and the Citizen Potawatomi Nation. The meeting begins at 6:30 p.m. tonight at the Shawnee City Hall Commission Chambers.)

Contact information for the members of the Shawnee (Okla.) City Commission can be found www.shawneeok.org/gov/commission.