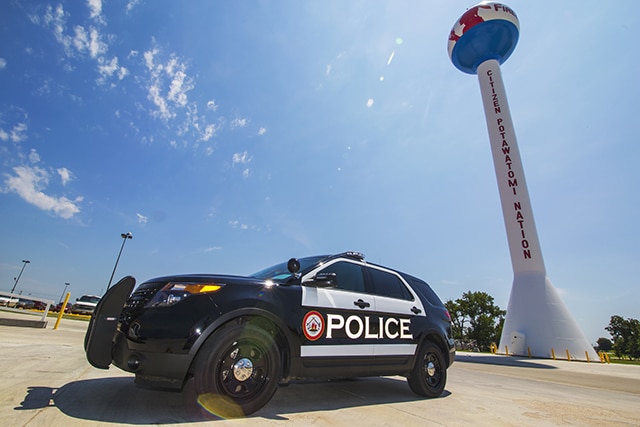 Serving most areas of southern Pottawatomie County, Okla. and adjacent Oklahoma County is not an easy job for the Tribal police force or the vehicles that carry them from areas as far away as Asher to Harrah. Understanding those challenges, the CPNPD is always on the lookout for new opportunities to secure top-of-the-line equipment in order to protect and serve the extensive Tribal jurisdiction.

It was this forward thinking approach that helped the police department secure its latest acquisition of 2015 Ford Explorers and SUV Police Interceptors. Major Jody Opela and Dispatcher Brian Scott worked together in finding and writing a grant that secured the vehicles.

“We were in a real need of an upgrade,” said Opela. “A lot of the cars we were using had high mileage. The hatchback feature on the new cars we got will allow for easier access in times of emergency and we’re just thankful to have this opportunity to better serve the community.”

The police department acquired eight new vehicles which are already in use. Each comes with all-wheel drive, allowing for greater handling and control in the various weather conditions that Oklahoma experiences throughout the year.