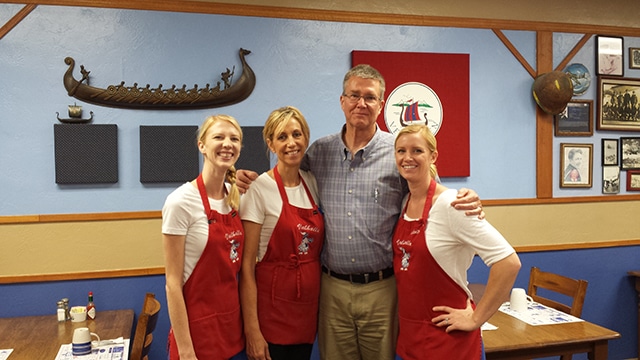 Spread across the United States and even further afield in the world, CPN’s thirty thousand members may sometimes feel detached from the day-to-day life taking place in the Tribe’s base in Shawnee, Okla. Maintaining that connection takes a commitment from a handful of Tribal legislators who reside around the country. Representing those members in southern California and Nevada is District 6’s Rande Payne.

Payne, born in Canada, boasts deep Oklahoma roots. His father is from Tulsa, while his mother’s family comes from Choctaw, a small community just northwest of the Tribal jurisdiction. His father’s time working in the Cold War-era missile defense system as a member of the U.S. civil service took the family across North America, occasionally coming back to Oklahoma before finally setting in California where he started a trucking company hauling agricultural products.

Growing up and working in the family trucking business cultivated his pursuit of a career in transportation. Soon after starting a family, Payne left his father’s business to work for a produce distribution company where he eventually becoming director of operations. After 12 years of service, Payne responded to an opportunity for a transportation director position at an up and coming family-owned foodservice distribution company, Saladino’s.

“It was exciting to be involved in such a great organization,” stated Payne. “We were definitely in growth mode. Taking on all of the northern and southern California Subway restaurants was probably one of our biggest challenges. My 15 years of service at Saladino’s provided opportunity for a great deal of personal and professional growth as well.” stated Payne.

Payne’s wife Kim and her mother Elsie owned and operated Valhalla Restaurant and Gift Shop in Visalia, Calif. for nearly 30 years. When Elsie decided to retire, Kim searched for a business partner. Nearing a point in his career where retiring was possible, Payne decided to step in as that new partner, putting his years’ of experience in foodservice distribution to use. 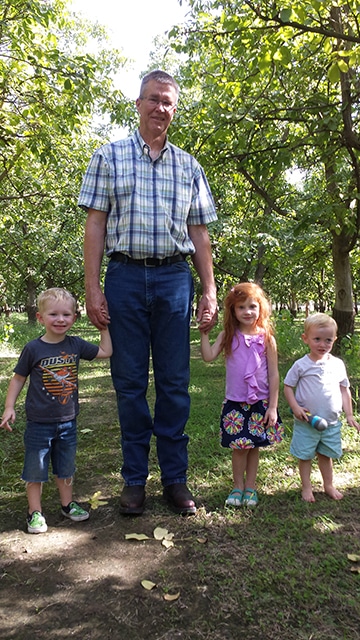 Rande and grandkids Daniel, Emma and Boston on a visit to the walnut grove.

“I’ll be honest though, this is much more challenging than I could ever have imagined,” Payne said with a laugh. “But my boss Kim keeps things running smoothly, and I get a lot more time to spend with my kids and grandkids. That makes it all worth it.”

Though he always knew of his Potawatomi heritage due to his mother’s ties back home, a personal connection with his Tribe wasn’t cemented until a trip to Shawnee in 1991 when Payne accompanied her on a visit to see her ailing sister in Oklahoma.

“That was the awakening point that really started my journey in terms of the heritage,” recalled Payne.

A second cousin shared an extensive genealogical history of the Tescier family, which drove Payne to attend as many tribal functions as possible once back in California. In the years preceding the current governmental system, Payne and his family were regular attendees at the state’s regional meetings.

His step into the governmental side of Tribal affairs also stemmed from a 2009 stop in Shawnee, when along with his brothers, Payne stopped into the CPN Administration Building to say hello to Chairman John Barrett and Vice-Chairman Linda Capps. Both encouraged him to run for the newly formed legislative body, and following the 2010 election, he became the dually elected representative for portions of southern California and Nevada. Yet like many tribal government officials in the outlying legislative districts, Payne faced the challenge of representing many voters who felt their distance to CPN’s base in Oklahoma was a burden.

“Then, people were more interested in the benefits they could access,” he explained. “I think part of that was due to information being so hard to come by. There was a sense for a long time that people outside of Oklahoma really weren’t cared about and assumed that there wasn’t anything available to them. But we’ve come a long way with that. Due to technology and other methods, people are a lot more familiar with the programs that are available to them.”

Reelected to another term at the June 2014 Family Reunion Festival, Payne says he recognizes that a consequence of this increasing awareness is his constituents’ focus on other issues, most notably an interest in promoting access to learning more about Tribal traditions and culture.

“There are a growing number of people who don’t see the growth of our enterprises and programs as a measure of success,” said Payne as he recalled comments shared by his constituents. “They feel we are failing at revitalizing our culture. Unfortunately, some even feel we should put all our eggs in the culture basket.”

Understanding these concerns, Payne also cautioned against narrowing the focus on just one aspect of the Tribe’s path forward, though he sees that the Tribe is in an age where a growing number are looking for meaningful connections to their past.

“Whether we like it or not, the sovereignty of our government and our economic systems are the hub all the other spokes connect to. As indigenous people, the world around us is much more complicated today. There are a number of things we can and are doing to better serve the cultural needs of our Tribe, but the functionality of our government and the success of our enterprises will ultimately provide the means for us to remain and thrive as a people in a vastly different world than that of our ancestors.”

On his plans for the upcoming legislative session though, Payne intends to work on bringing more cultural activities to his district.

“There’s no denying the importance of the Tribe’s economic prosperity, but that alone doesn’t have to define who we are as a people. But it goes a long way in helping insure our sustainability” stated Payne. “At the same time revitalizing our culture has to be high on our priority list.”

“Having the resources available is key in our quest to rediscover our heritage and culture. Being as spread out as we are makes it nearly impossible otherwise,” he said. “And ultimately I believe it is our destiny to bring the traditions of our past out of hiding, figure out how to practice them today and preserve them for eternity.”

Payne is also interested in exploring another issue that came as a result of his uncontested victory in the 2014 election. Like many of his fellow representatives, Payne remains puzzled by the low voter turnout in Tribal elections, a point he promises he will continue to bring up with his fellow Potawatomi.

“In certain respects there is less criticism than there used to be. But I ask myself, is that because people feel like there is no point in saying something? Or is it because they feel like we’re headed in the right direction? Most of the feedback I receive on how the Nation is doing is positive so maybe it’s self-imposed pressure to do more. And that’s okay too, because that’s just what I intend to do,” said Payne.