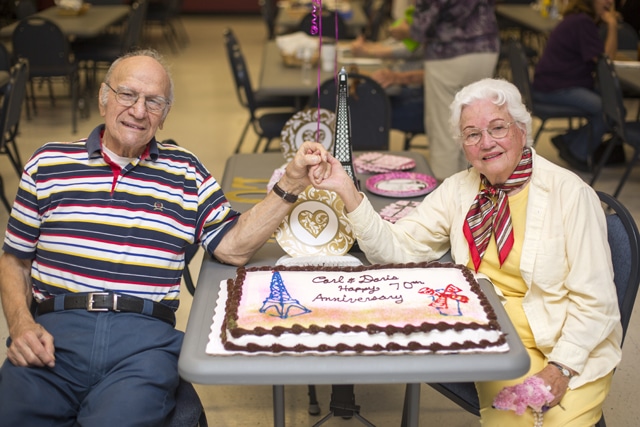 In August 1944, the Second World War was still raging, with Allied forces in France continuing to push east after the D-Day landings in Normandy and American forces seizing Guam back from Japanese control in the Pacific.

While the war dragged on and was never far from mind, positive news on the home front was still as welcome as ever, as Dorris and Carl Brenner can attest. The Brenners, residents of Shawnee, Okla. are set to celebrate their seventieth wedding anniversary this August.

Doris, a member of the Weld family from Pauls Valley, first met Carl in 1943 on the campus of the University of Oklahoma. A member of the U.S. Navy, Carl was at the college training in electronics and was quartered in the women’s housing facilities.

Female students like Doris had consequently been moved to the empty male fraternity houses on campus to make room. Doris and her fellow housemates at Victory Hall 8 decided to have a dance with the newly arrived sailors and invited them to the event at the hall.

“They came into the foyer and I was upstairs,” recalled Doris. “I was looking over the guys as they stood down there and saw him and said to myself, ‘I think that’s the one for me’.”

It was love at first sight, as Carl later admitted that he had the same feeling upon seeing Doris for the first time.

The Brenners are regulars at the Title VI Elders program and were thrilled that their fellow program attendees were there to see them off as the prepared to celebrate their seventieth anniversary in Paris, France.

Looking back at seven decades together, Doris and Carl say that the key to such a long and fruitful marriage was a simple one.

“In a marriage you can’t be a boss over anybody,” said Doris as she met well-wishers at the Title VI luncheon. “You need to have the realization that if you’re going to last, it has to be a partnership. And we are.”