For the next several months I will be writing about different traditional Potawatomi values. I will start out by saying that no one person has all the answers when it comes to traditional beliefs. Sometimes the way to learn more about the Tribe and our ways is to talk to different people. There are many who have knowledge about the Tribe and our ways. It’s by talking and living as a Potawatomi that you gain a deeper insight and understanding into what it means to be Potawatomi. The language can also help you to have a deeper understanding as to what was and is important to our people.

This first topic covers quite a bit. Respect is a complicated concept. It can mean to honor something or someone. Or it can mean to have reverence for something. An elder once told me that tobacco precedes all things. Therefore when you approach a traditional person and you have a traditional request, whether it be for an Indian name or for some other cultural knowledge, it is always respectful to offer that person tobacco first. What kind of tobacco is up to you. If you know the individual is a smoker, you might get them their favorite brand. If not, perhaps loose leaf tobacco. You could even make them a little leather pouch and put the tobacco in that.

Here in Shawnee, Okla. we always recognize an elder with a Pendleton blanket for being the oldest in attendance at our meetings. In the past, our elders were always the ones who knew our traditional ways, our language, our stories and how to conduct our ceremonies. When we had questions or difficult times, we would often consult with our elders on what to do. The elders are the backbone of a community. Often the elders are the most active members within a community and have a lifetime of experiences with which to give insight to the next generation.

One way of showing respect to an elder is during meals. Make sure to allow your elders to go first. If you are a young person don’t rush up to the front of the line. If you see a kekyat (elder) that isn’t able to get a plate of food themselves, make a plate and bring it to them. But respect for our elders goes beyond this.

If you know of an elder that needs help cutting wood or mowing their yard, volunteer your time and help them. Perhaps you know some elders on fixed income, you could see if they need anything to eat and you could bring them a box of food. Traditionally we believe that a person will be rewarded for the way they live, so remember that you too will be blessed for helping your elders.

We also have respect for the dance arena and our ceremonies. We dress in an appropriate manner when we go to a dance or when we are a part of a ceremony. At ceremonies woman will often wear skirts and men will wear jeans or slacks. Woman can also wear slacks. I often tell people they should dress for ceremonies with the same level of respect they do when going to church. You shouldn’t wear flip flops, cut off shirts, bathing suits, skin tight clothes or any type of provocative or inappropriate clothing. You do not want to distract from the reason you are there.

Respect goes beyond tribe and family to also include the earth. We traditionally view the earth and all around us as jagenagenan – all my relations. We are related to everything. The cedar tree is our brother, the water is our relative and the lifeblood of mother earth. Even something as small as an ant is a part of this greater circle of life, just like each of us has a purpose and reason to be here.

We also don’t take more than we need. You don’t hoard hundreds of eagle feathers, for example, just because you can have them. Instead give them away to other Potawatomi people who can use them. If someone needs something and you can help them, you do. We are a community. We are family. The most honored person in a community in days gone by might be someone who gave everything away so that others would come first. {jb_quoteright} Our traditional ways aren’t about “me or I.” They’re about us, our community and putting the good of the Tribe first while looking seven generations into the future and seven into the past. {/jb_quoteright}

Our traditional ways aren’t about “me or I.” They’re about us, our community and putting the good of the Tribe first while looking seven generations into the future and seven into the past. How are your actions today going to affect your child, grandchildren and great-grandchildren? How do your actions today embody the beliefs of your ancestors?

Respect can also involve our spiritual items such as eagle feathers, pipes, drums and the four main medicines of tobacco, cedar, sage, and sweet grass. The eagle is the bird that flies the highest and carries our prayers up to the Creator. We have a story about how the world was going to be destroyed in four days, but the eagle intervened on mankind’s behalf and saved us. Therefore, we hold the eagle in very high regard.

When an eagle feather drops while a dancer is dancing, it’s a big deal because it represents a fallen solider. Four veterans are asked to come out and talk to the individual who dropped the feather about the seriousness of the occasion and make sure that the dancer understands that they must take better care of their feathers.   It is important that the lesson of respect for our feathers in these instances comes from veterans because they are our warriors, just like the eagle.

In other situations, people will often smudge off their pipes and eagle feathers before using them. They will use sage to get rid of any negativity and sometimes they will mix other medicines in as well. Smudging is smoke that rises up that we run our spiritual items through before using them and something we do to people before entering a ceremony. We also bless certain areas such as the dance arena and even the room we do general council at before we start the meeting. 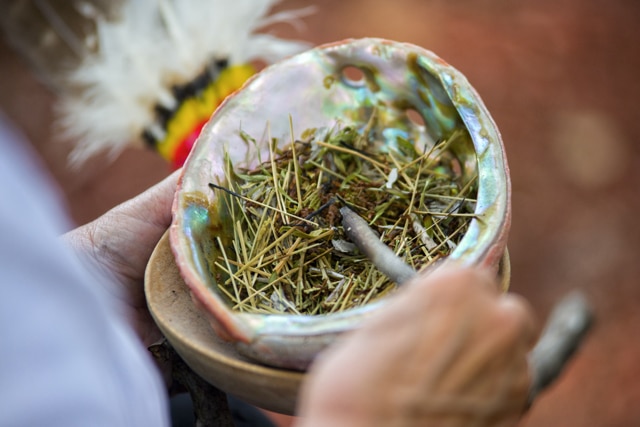 Traditional women would stay away from ceremonies during their moon times. They wouldn’t touch spiritual items such as eagle feathers, pipes, etc. It is said that during this time of the month women are extremely powerful. In the old days a separate wigwam would be set up away from the house and a woman would go there during their moon time. Traditional women  would also not prepare food or touch any crops during this time period. Often times women would not fast because it was seen that they were reborn in many ways each month. Fasting could be done by both men and women and in many ways represented a death of self and a deeper sense or vision for the future.

Respect can be as simple as just listening to others and to their opinions. Sometimes all a person really wants is to speak and be heard.

Another example of respect is our ceremonies. We don’t tell others how to run their ceremonies. All you can do is share with someone the way you were shown on how to conduct different ceremonies. It is then up to that person to live their life in the manner they choose to. It’s not our place to pass judgment on them. At the end of the day it is up to the Creator to judge each of us by how we choose to live our lives.

If you don’t like the way a person is running their ceremony you don’t have to attend. But a traditional person would not tell everyone what’s wrong with this person’s traditions or that person’s ceremony. They might share their own experiences, but it is up to each individual to decide how they are going to live their own lives.

One thing to keep in mind as you learn more about traditional ways. Be patient. Many people get in a hurry and want to know everything right now. Often people will take that knowledge they gained and naturally want to share with everyone they know immediately. It’s not a race. You have an entire lifetime to learn about our traditional ways. Take your time. Go about it in a reverent and loving way and live a respectful life. You will be blessed for living in a good way.

IW (Pronounced ee-oh. It is the traditional way to end a statemen or prayer, much of like saying “that is all” or amen.)