At the close of each year, class participants give an oral and written presentation of their experiences. Below is the second of a two part series on the reflections of the 2014 Potawatomi Leadership Program class. 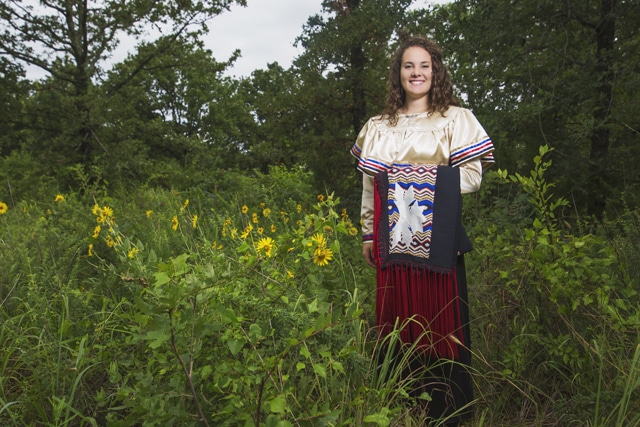 Like her fellow West Coast PLP classmates, Lydia Davidson summed it up best about her preconceived notions of a summer internship at the Citizen Potawatomi Nation saying, “I came to Oklahoma with the impression that it would be how I envisioned Kansas to be: dusty, dry, hot, without Wi-Fi or cellphone service. The CPN that greeted me on my first Monday of work was a large enterprise that despite its vastness, still managed to capture the family aspect and cultural teachings of the tribe.”

A Kennedy and Weld descendent, Davison says her expectations were exceeded because “there are green trees, never a dust storm and the weather never broke any heat records.”

Raised around members of the coastal tribes in her Seattle, Wash. home, Davison credits the PLP program with giving her a chance to reconnect with her family’s Tribe and learn its history and traditions.

Davison and project partner Kristi Melot laid the foundations for a future smartphone app that Family Festival attendees may use to register, learn about regalia, connect with family and follow the schedule at the annual event. It was an easy transition for the University of Washington student who is studying Human Centered Design and Engineering, named Gdede Mned O Kwe (Otter Spirit Woman) for her playfully independent attitude and leadership qualities by Sharp House Mother Margaret Zientek. 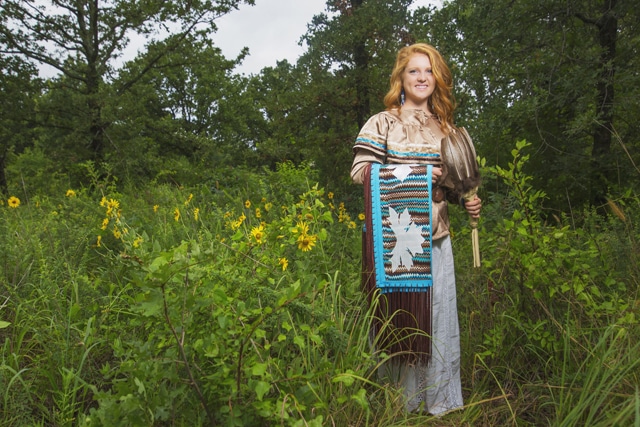 Kristi Melot, of Hobbs, N.M., is majoring in Business Studies at Angelo State University in San Angelo, Texas. Entering her second year in college, the Melot-Bergeron family descendent expressed a common answer amongst this year’s PLP participants in both its authenticity and practicality in explaining why she signed up for the six-week internship at Citizen Potawatomi Nation.

“I expected it to be really hot, and boring and that I might be stuck in a boardroom for eight hours a day,” said Melot. “But I also thought that it’s somewhere to get away and it will look good on a resume.”

Initial expectations aside, Melot explained that the while the professional internship aspect was a driving factor in applying to the PLP, the expanded knowledge she received was an invaluable gain during her time in Oklahoma.

“For me personally, though there were some slower times, it has been really interesting for the most part. You just take in so much knowledge; it is a real learning experience.”

According to the Hobbs-native, going through the traditional sweat lodge, full moon and the naming ceremonies were all incredible experiences, both for their distinct differences as well as their similarities.

Thoughts of tornadoes and sudden thunderstorms couldn’t keep Cathedral City, Calif.’s Moniece Venegas from applying. Oklahoma, unlike the Dust Bowl-era reputation that many of her fellow Californians still picture when hearing of the state, was even greener than she expected due to a wet summer.

Venegas had a unique guide in learning more about her Tribe in her own mother, who had not known she was a Tribal member until the age of 18, and had to register her own mother, brother, Moniece and her sibling and herself in her mid-twenties.

“I feel as though she put a lot of effort into making sure her kids, myself included, were registered and knew that we are Native Americans,” said Venegas in her presentation on the PLP elder interview assignment.

Also like her mother, Venegas wishes to one day work for the Agua Caliente Band of Cahuilla Indians in Palm Springs, a goal that was a driving factor in her participation in the 2014 PLP class. The Trombla-family descendent studies math at the University of San Bernardino in her home state, and like her classmate Isaac Morris, cites the game of stickball against the Chickasaw Nation team as her most memorable experience.

Allen, Texas’ Nick Smith faced a choice between a summer move with his family to California or the Potawatomi Leadership Program. After a couple weeks of helping prepare for the move though, he decided a trip to Shawnee, Okla. thinking being a PLP member might be a nice change of pace.

Speaking in the final days of the 2014 PLP’s activities at the CPN Administration Building, it appeared the Anderson-family descendant’s decision worked out. In his final remarks reflecting on the six-week internship, the cellular and molecular biology student from Texas Tech University remarked that his time at the CPN Health Clinics provided an insight into a unique health care system. For a pre-med like Smith, it was an eye opening experience.

“I really liked how CPN structures their healthcare system,” he said. “It’s something I had not even heard of before, but having seen it first hand, it is really interesting to me to compare it to what is out there now.”

Smith, who admitted that his attendance at previous Family Festivals strictly centered on playing in the golf tournament, said that his time as a PLP filled in some gaps of his identity.

“I never took the time to find out more about my family history, the Tribe’s culture or even the history of the Tribe. However, these questions lingered in my mind. I continuously assumed that one day, when I was older, I would take the time to answer them. Little did I know, they would be answered in the summer of 2014.”

Though he conceded that his only previous stint in Shawnee, Okla. was on the way to a ski trip, Parker Lewis figured he might spend the last summer before college there.

“I saw the Potawatomi Leadership Program flyer in the mail, and knew within a couple of minutes that I was going to apply,” he said.

Despite some hesitance from his parents, who understandably wished to have him spend his summer closer to home in Paris, Texas, Lewis closed out the 2014 PLP session feeling closer to the Tribe than he’d anticipated when he applied for the program.

“I felt like it would be a job,” recalled the Burnett-family descendent. “I honestly didn’t realize how much fun it would be.”

A student of mechanical and energy engineering at the University of North Texas, Lewis noted that the most enlightening parts of the program were the talking circles where PLP members and counselors exchanged thoughts and ideas on a host of topics.

“Whether we were talking about our Native identity or the Tribe’s future and its leadership, it was just refreshing to hear other people’s points of view. Listening to each other’s ideas and thoughts made us all a lot closer and feel more connected.”