This article originally featured in the Ontario Monster Whitetails Volume 9, No 2. It has been reprinted here with the express written permission of Beasley Brothers Outdoors Inc.

In April, Brian Erbin, Josh Felty and I booked a black bear hunt for August, with Marc Cloutier of Raleigh Lake Resort and Outpost. A trip to northern Ontario was in the works.

I spent countless hours shooting my bow at different times and positions to be ready for the hunt.

Several trips were made to my local archery pro-shop, Arrowhead Archery, to have my bow tuned and tweaked for the hunt; I wanted it to be perfect when the time came. Jeff Steele made my bow perform to its full potential. Arrows were selected and matched to the correct broadhead. How effective my preparation had been would soon be determined.

Aug. 13 was a warm summer morning as, Brian, Josh and I packed up our gear and headed north on I-35 to Raleigh Lake Resort. Heading north we drove thru the day and well into the morning of Aug. 14.  After arriving in International Falls, Minn. we slept for a few hours before crossing over into Canada.

Five hours later we stepped out to fresh air, beautiful scenery and Marc Cloutier. The scenery was more than I expected. The tall pines and clear water was a site better than the crooked oaks and murky waters of Oklahoma. We unpacked, completed our paper work and headed into Ignace to purchase licenses and tags. Once back at camp we settled in and met with the other guide, Dave Sobczak. 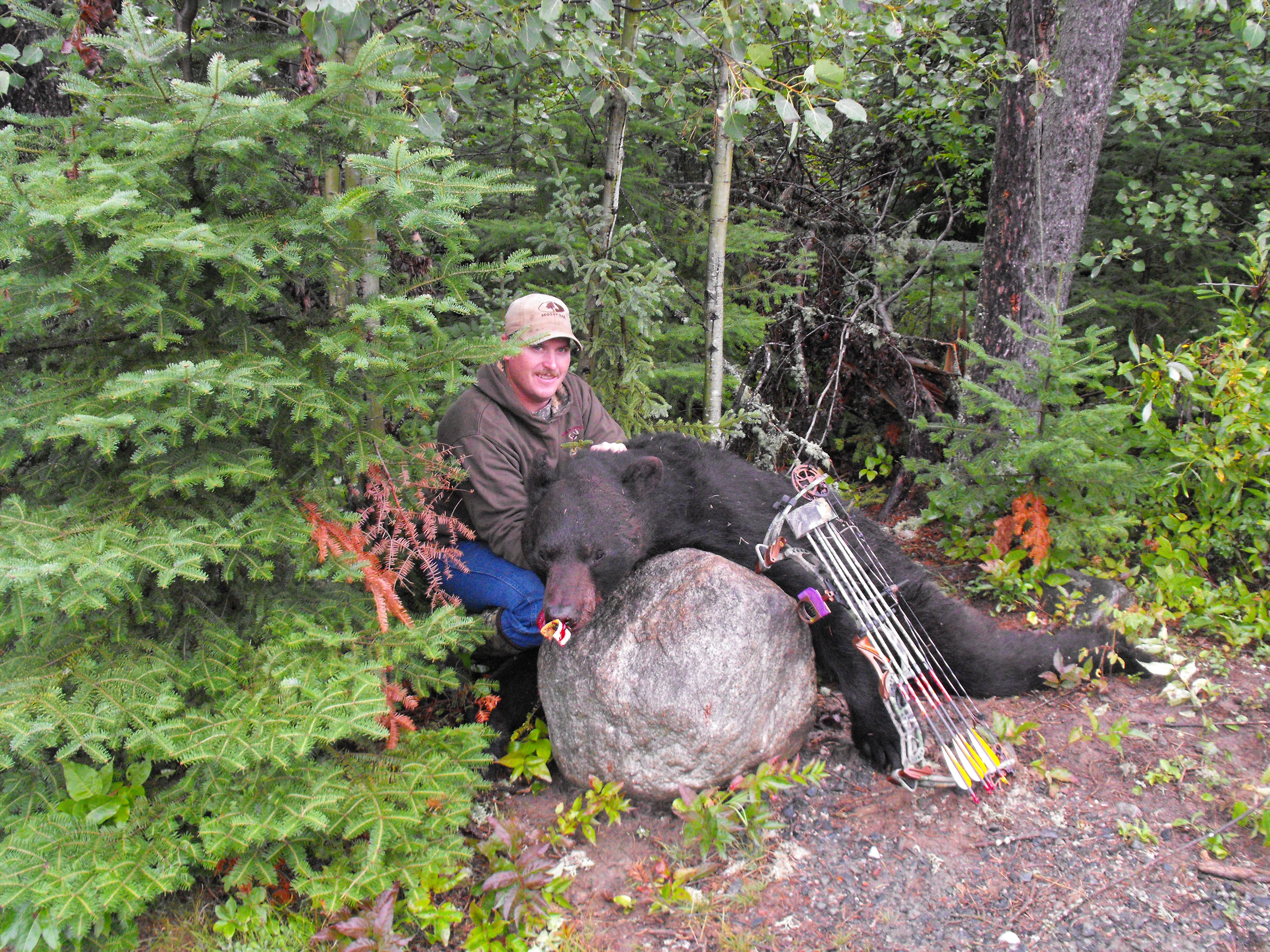 On Aug. 15, opening day, I was up early, ready to get in the bush and into a stand. But we were not scheduled to go out until the evening. Our pre-hunt time was well spent as a friendly shooting match between friends, to make sure our bows were still on after a 24 hour drive, took place. As the afternoon passed, clouds began to roll in.

Before going out I talked with Dave and Marc about sizing bear and shot placement. The excitement was really setting in and I was ready to get to it. Being a south paw shooter, I was going to have to make an adjustment to the stand that I was to be shooting from. I did not know that adjustment meant that we were going to set another stand up. At two o’clock we headed out. A short twenty minute drive brought us to the spot that I was to hunt. As my heart began beating a little faster, I exited the truck, shouldered my pack and grabbed my bow. Dave led the way with a bucket in one hand and a ladder stand in the other. Two hundred yards later we were at the spot. Dave made quick work of hanging the stand and wishing me luck.

What happened next was more than I expected. At 2:45 I climbed into my stand. Taking a Carbon Express Maximum Hunter 250 tipped with a XT-4 I nocked it to my Alpine Bow. Pulling my head net up over my head I took a deep breath and exhaled slowly clearing my lungs. Setting in my stand I scanned left to right and back again slowly taking in my surrounding and logging the shadows and clearings in my head for quick reference later. I had my first sighting of him at 3:05. He slowly passed me from right to left at thirty yards and disappeared into the dense bush. My heart was pounding as I lost sight of him. I exhaled softly, now noticing I had been holding my breath. I scanned all around me trying to catch site of the bear, but I saw nothing.

I glanced at my watch and it was 3:12. As I pulled my glove up over the face I saw him creeping in, his head moving from side to side as he sniffed the air; fourteen yards and he was broadside to me. I slowly reached for my bow which was hanging in front of me and worked my shaking hand into the strap and grasped the riser. Quietly I removed it from the hook and attached my release to the loop. I glanced up; he was at fifteen yards and headed away from me. He stopped at seventeen yards and I brought my bow to full draw as he faced away from me. He was at seventeen and a half yards and at the bait, but still facing straight away from me.

It felt like eternity was settling in. Forty five seconds had passed since coming to full draw. I felt my arms burning and my heart rate was really picking up at this point.

I whispered quietly: “Quarter away from me.”

As if he heard me, he turned to the left. Peep, pin, black blob, no shoulder. I looked off the bow and at the bear. Again peep, pin, black shoulder. I touched the trigger of my release and sent my arrow down range. THWACK rang in my ears as I saw the broadhead emerge from his right side. He let out a sound of pain and defeat as he stood on his hind feet. He took three steps and he toppled over.

My body was shaking and my breathing was short and shallow as I nocked a second arrow for a follow up shot if needed. At 3:15 my bear was down. I waited to hear the three moans escape him. I sat quietly until 3:45, until I was sure my legs to work so I could climb out of my stand. I walked cautiously towards him confirming he was dead. I then laid my hands on a beast of a bear! At that time I had no idea how big he was or what was in store for this Oklahoma boy.

It started to rain shortly after I shot my bear. I stayed in that stand until 7:30 when Dave came to get me because of the lightning that was striking around our area. I remember climbing out of that stand and Dave asking if I had seen anything. I said I had, he then asked if I had got a shot at him. I smirked and said he is right over there.

“Yeah, he is right over there.”

He shook my hand and congratulated me. That meant a lot to me. We walked over to where the bear laid and Dave said “That’s a nice bear, about 200-225 pounds.” We went and picked up another hunter and came back for my bear. Two long hours later he was in the truck.

After three attempts to weigh him failed, we finally got him weighed at 355 pounds. Dave and I were amazed. It would be six months before we would know how great this bear truly was. It was an amazing trip for me and my friends. Thanks to Marc at Raleigh Lake for making us feel at home and to Dave for being a great guide and mounting my bear for me at Spirit of the Wild Taxidermy. And thanks to Jeff Steele at Arrowhead Archery for his knowledge and help with my bow. And the thousand cups of coffee it took to make it back home.