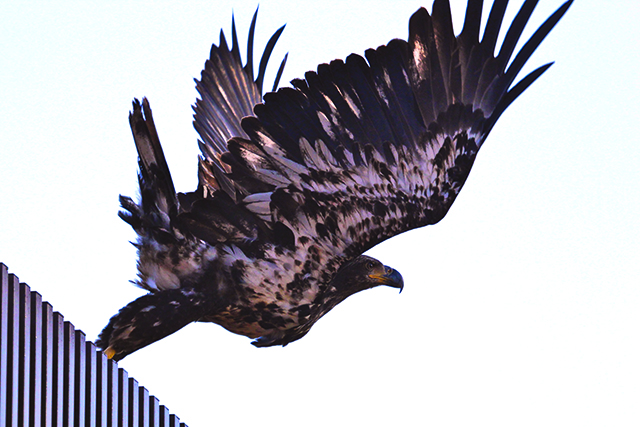 Wadase has spent much of the last few months exploring new territory. During the last week in May, she worked her way up north following the Arkansas River until she reached the Salt Fork and headed west to the Great Salt Plains Lake, just 7.5 miles shy of the Oklahoma border. This is her furthest trip northwest to date. As we continue to study her movements, we’ve learned that she can now easily travel 50 miles a day as she meanders along the river’s path, hunting and exploring. She is as capable as any other eagle in the wild with the ability to go anywhere. It will come with little surprise when she crosses into other states and continues to explore new territory.

June was busy with preparations for the Festival. It is amazing how time passes quickly this time of year. We were honored to have members of our Pokagon Band of Potawatomi visit the aviary during the first part of June. When Chairman Barrett spoke to them about Wadase’s release, we were surprised as we calculated just how many days she had been gone from the aviary. As we stood out front talking about her release and progress, she must have heard as so many of us spoke her name. 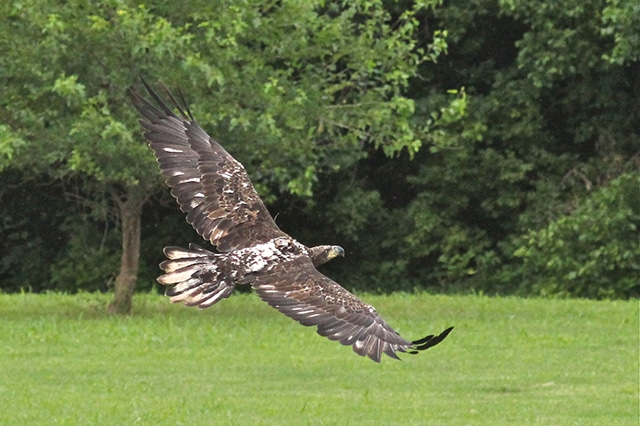 On June 12, just a day after that tour, she came home. A large bird cut across the pasture and caught our eye and we realized it was Wadase coming in to land on the corner of the aviary. After two months and two days she was home. She spent the majority of the afternoon in the pecan tree out front and did not eat what we had offered her. Turning down a free meal after flying more than 75 miles means that she is having absolutely no trouble catching her own meals. However, at sunrise the following morning she was ready and waiting for breakfast on top of the aviary, just as if she had never been gone. On the fourth day she ate very heavily and we suspected she might leave that afternoon as she had done before her first trip north to the Arkansas River. 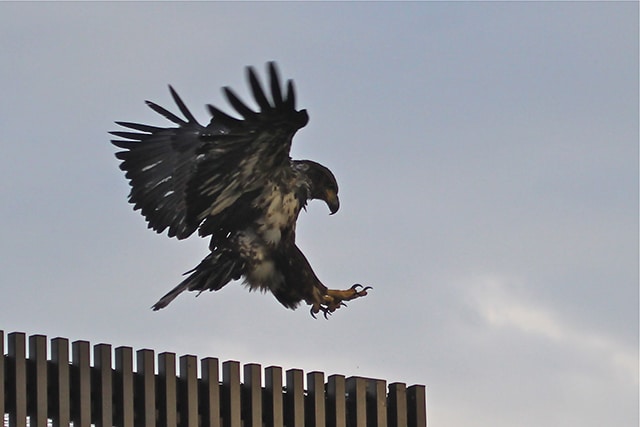 As we expected we did not see her on the fifth morning. The time had come to download new telemetry data and we hoped we could learn where she had headed. To our surprise, on the fifth day, she had roosted at end of Squirrel Creek where it flows into the North Canadian River here on the aviary property and was still within a mile of the aviary itself. She had not followed her previous routine.  Late that afternoon she came in to visit the eagles. She would land high in the cottonwood out front and perch for a time before diving from her perch and circling the aviary, calling to the eagles in the enclosures as she passed by. Sometimes she would fly low just skimming the tops of the pasture grass and power her way with ease up to a high perch at the last second to land. At other times she would bank high above the trees and float in to perch for a short time before she was off again.  That display was the most breathtaking display of flight and power that we have seen from her here. She continues to amaze us with her progress and ability. So many eagle experts that we have spoken to have indicated she would no doubt return to Florida where she was hatched. Yet as they continue to follow her story, she is beginning to change their mind. Wadase Zhabwe ventures further each time she leaves and no doubt stays gone for longer stretches of time, but when she returns, her path is direct and leaves no question as to where she is headed. Home.

Today as we write this article we can barely see her in the distance above the river north of the aviary as she circles high above us. She continues rising ever higher in the current of a thermal. Drifting out of sight into the first tier of heaven to hand off the prayers she carries for us all.

For more information or to read previous updates please go to https://www.potawatomi.org/about-wadase.