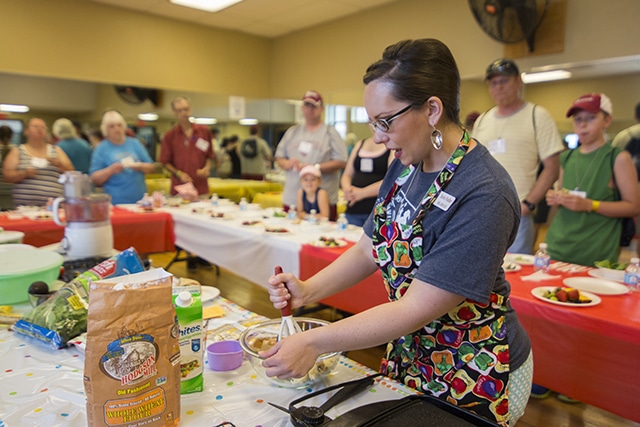 According to the Centers for Disease Control and Prevention, childhood obesity continues to rise in the U.S. For children 6-11 years old, 18 percent were considered obese in 2012 compared to just 7 percent in 1980. Adolescents from 12-19 years old were similarly impacted, with 21 percent being considered obese in 2012 compared to just five percent in 1980.

CPN Dietitian and Case Manager, Torie Fuller MS RD/LD, is well aware of these statistics and is implementing strategies to keep Tribal youth on the road to healthy living.

Fuller, along with Laura Scheihing, a University of Central Oklahoma Dietetic Intern, organized three cooking demonstrations within a week to kick start healthy events for the Tribe’s youth.

“The cooking demos have been focused toward children and to teach them how to start cooking in the kitchen,” said Fuller. “Hopefully it will spark an interest for them in cooking that continues as they grow into adults.”

Tribal youth enrolled at CPN’s summer youth program, the P.L.A.C.E., participated in a cooking demonstration where they made apple nachos and were given their own reusable water container to make low sugar drinks using water, sugar free Crystal Light and a small amount of Fresca.
Fuller and Scheihing, subsequently held two additional cooking demonstrations specifically geared towards parents and children cooking together. These classes partnered adults and their children to prepare healthy meals. Children were encouraged to use a rainbow of colors of fruits and vegetables as well as adding more whole grains into their meals.

The dietitians showed participants how to make an avocado wrap, whole wheat banana pancakes and a friendship salad that encouraged everyone to lend a hand in making meals healthy, friendly and fun. Given the summer heat just outside, Fuller and Scheihing also instructed attendees about how to stay hydrated with low-sugar beverages during the summer.