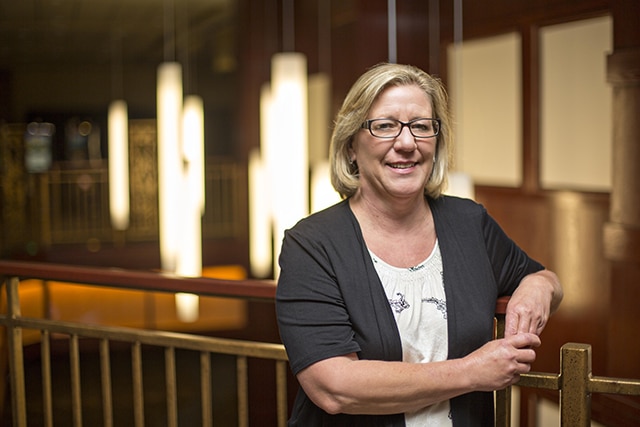 In an industry that Hollywood has portrayed as a bastion of rogues and crooks, working in the gaming community can appear as a strange career path for someone like Judy Shore. Shore, the Director of Casino Operations for Grand Casino Hotel and Resort is more typical a face of the gaming industry than anything one sees on the silver screen though.

Born and raised in Muscogee, Okla., Shore grew up in a time when gambling was illegal on tribal lands. A member of the Muscogee (Creek) Nation, she moved to Shawnee, Okla. in 1980.

Shore only expected to work there briefly as she was only seeking temporary employment. Little did she know starting in that position would be the start of her career as Director of Casino Operations for Grand Casino Hotel and Resort.

Shore spent several years working in the bowling alley, all the while being asked to consider a move to gaming. Eventually, she decided to give it a try and began working the off-track betting that was once a mainstay of the casino’s business.

In the early 2000s, CPN began construction on what would eventually become the Grand Casino. Shore saw it as an opportunity to further her knowledge in gaming industry and followed General Manager Linda Canada to what was then referred to as the “Baby Grand.”

Previous General Manager for Grand Casino, Steve Degraffenreid, hired Shore as a slot machine manager at the brand new casino, allowing her an opportunity to see the other aspects of the gaming industry. Though she thought this was also a temporary change, Shore discovered a passion for gaming and saw the opportunity to advance in her career.

“Working in many different positions for CPN, I’ve always enjoyed the people that I’ve worked with,” said Shore. “The opportunities I’ve been given make working for the Tribe a great place to be employed. I owe a lot of gratitude to the Nation, my fellow employees and managers, both past and present.”

The decision has since paid off for Shore and the Grand Casino, where she enters her sixth year as the Director of Casino Operations. She now oversees 2,100 slot machines, 21 table games, 19 poker tables and a Keno lounge. Shore has also had a major hand in overseeing the placement of slot machines and gaming tables on the original gaming floor for Grand Casino, as well as the newly constructed resort.

“Judy is very dedicated to her job, as well as to her employees and the tribe,” said General Manager of Grand Casino Joe Garcia. “Throughout the years, Judy’s hard work and dedication, has earned her the utmost respect as an individual in many aspects.  She is extremely knowledgeable in the gaming industry, an outstanding director and someone the Tribe is proud to have as an employee.”

Shore is just another in a long line of CPN employees who have proven the Tribe’s ability to hire and promote within. Her path up the career ladder at CPN reflects the long term thinking of both the Tribe’s employees and direction in general, and is evidenced in its success today.