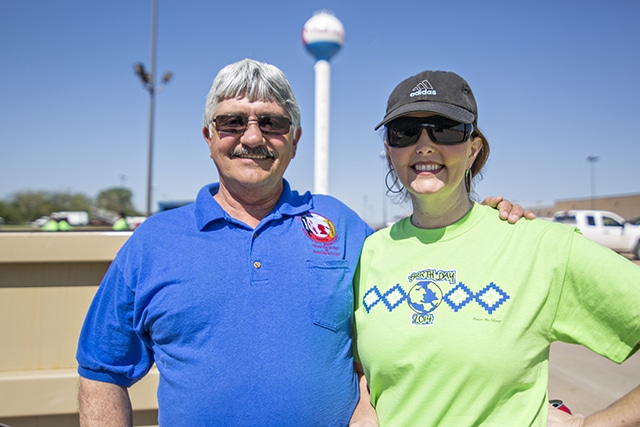 April in Oklahoma is when the season truly starts to change, with grass turning green, trees begin to bud and crops sprout from the tilled soil. With seven billion people in the world, keeping up with the waste is something the earth can’t defend against without help. Earth Day was created in 1970 by Senator Gaylord Nelson of Wisconsin. His inspiration came to mind when observing the oil spill in Santa Barbara, California. Senator Nelson said the world was in need of recognizing the importance of a clean and healthy eco-system.

The Tribe has tried to play its part in Senator Nelson’s original idea, participating in an annual cleanup of areas around the Citizen Potawatomi Nation. CPN Director of Safety and Housekeeping, Tim Zientek, has implemented an annual community wide service on Earth Day to keep the areas in and around CPN looking good.

“Recycling is an important issue with keeping not only the Tribal jurisdiction a clean and safe place but also the world,” said Zientek. “We want the community to use this opportunity of recycling and disposing of everyday trash and implement it into their daily lives. Habits like this keep CPN and the community a great place to live.”

The event was a team effort by several different CPN departments. Housekeeping, Environmental Health, Tribal Youth and FireLake Discount Foods all had a hand in helping out. 119 employees signed up to take time out of their daily lives for the event. Volunteers worked together in groups cleaning out creeks, ditches and roadways. The teams cleaned areas from Brangus Rd. to 13th St. in Tecumseh, Okla. and the N. Canadian River to Benson Park Road in Shawnee, Okla.

BJ Trousdale, Director of the FireLodge Tribal Youth program, coordinated her students to get involved with the effort.

“This event was a great opportunity for kids in the FireLodge Tribal Youth Program to continue serving their community,” said Trousdale. “They are often asked to serve as individuals, in awareness events, or to do some type of manual labor, but this experience allowed them to visually see the difference they were making. As Native youth, I think they also learned to respect and appreciate the land they live on even more, just as our ancestors once did.”

Forty youth spent two hours after school with program mentors picking up trash in the community. They also had the opportunity to coordinate a fundraiser during the event and sold hot dogs, chips, and drinks during the evening hours. The complimentary hot dogs and soft drinks were donated by FireLake Discount Foods to anyone dumping their trash in the dumpsters or recycling their goods. All proceeds from the donated food and soda were donated to CPN’s Tribal Youth program.

The funds gathered from the fundraiser will be used this summer to send over 30 youth to pueblos in Hamas, New Mexico where they have been invited to celebrate in a traditional feast. Additionally, they will spend the final days of their trip in Durango, Colorado at Fort Lewis College for an official tour, a taste of the dorm life, and several adventures including white water rafting and zip lining.