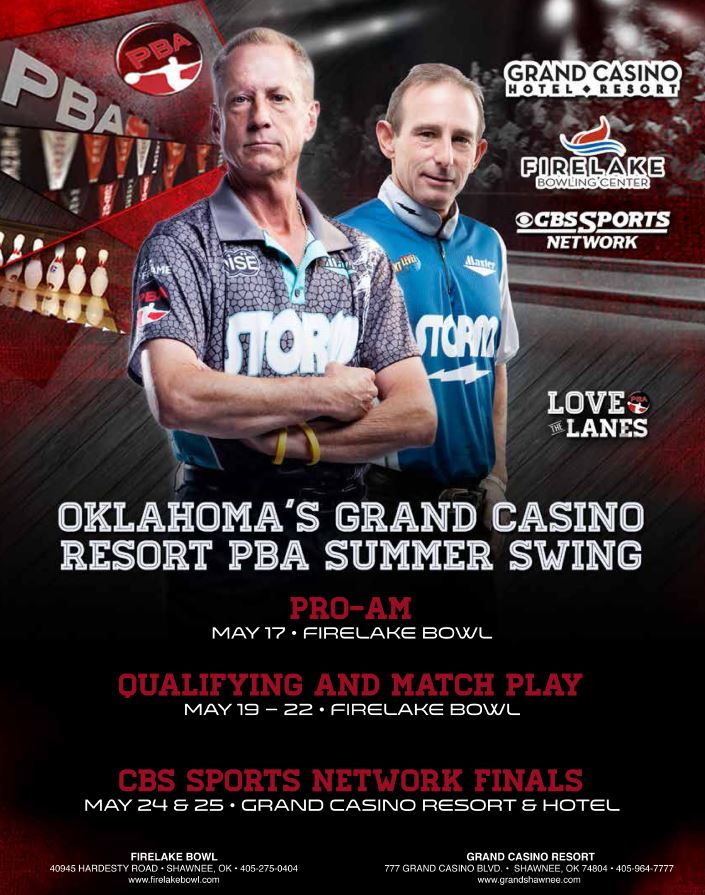 The PBA Tour returns to Oklahoma for the first time since 2005 when the Grand Casino Hotel and Resort host the Grand Casino Resort PBA Summer Swing at FireLake Bowling Center and the Grand Event Center in Shawnee, Okla., May 17-25.

Click here for the schedule of the week’s bowling.

Four PBA Tour events conducted in one week: The Summer Swing will include four PBA Tour title events – the Wolf, Bear and Badger Opens, the PBA Oklahoma Open – and the Grand Casino Hotel and Resort Summer King of the Swing special event involving the four tour event winners plus a “wild card” player.

CBS Sports Network telecasts: The finals of all five events will be conducted in a stadium setting on lanes installed in the Grand Events Center. Finals will be conducted on Saturday, May 24, at 11 a.m. (Wolf Open), 2:30 p.m. (Bear Open) and 6 p.m. (Badger Open) and on Sunday at noon (Oklahoma Open) and 3:30 p.m.) Oklahoma’s Grand Casino Resort King of the Swing. Finals will be recorded for delayed broadcast by CBS Sports Network.

Tickets: TV finals tickets may be purchased by visiting www.grandboxoffice.com, by calling (405) 964-7263 or by visiting the Grand Casino Event Center Box Office. General admission all-day passes are available for $25 each day for Saturday and Sunday’s TV shows. A lane-side all-day VIP pass is also available for $80 each day. Tickets for practice session, qualifying, match play rounds (May 18-22) and pro-am day (May 17) are $10 each day or $30 for a week-long pass (which does not include TV finals). Telecast dates and times will be announced later.

Women entered: Kelly Kulick of Union, N.J., won the 2010 PBA Tournament of Champions to become the only woman to ever win a PBA Tour event. Clara Guerrero of Colombia; Shannon O’Keefe of Arlington, Texas, and Missy Parkin of Laguna Hills, Calf., are also entered. All four have won PBA Regional titles. Guerrero is one of three women who have ever advance to a nationally-televised PBA Tour final (she finished fourth in 2013 Cheetah Championship in Las Vegas).