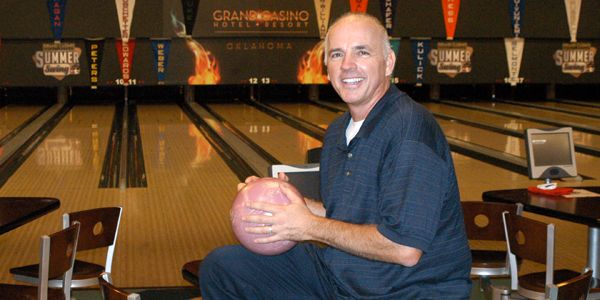 Burkett, an accomplished bowler who lives in Southlake, Texas, will compete in his first PBA Tour event since the 2007 GEICO Classic in Irving, Texas, when he bowled at the PBA’s invitation and finished in 54th place. Burkett, who will be 50 on Nov. 28, reinstated his PBA membership in March with an eye on getting ready for the PBA50 Tour in 2015.

“When my 49th birthday came along, I started thinking about the PBA50 Tour, so I got my (PBA) card,” Burkett said. “The Summer Swing came along, I live in Fort Worth, which is only three hours away, and things just fell into place, so it was a no-brainer for me to enter.”

Bowling as a professional has always been Burkett’s dream, beginning as a youngster when his first job was setting up pins at Wedgwood Lanes, a duckpin center in his Beaver, Pa., hometown. He discovered tenpin bowling at a different center, but he said the day Wedgewood Lanes converted to tenpins was “the greatest gift I ever got. I told them I’d work for free if they’d let me bowl for free.

“I wanted to be a professional bowler before I ever took up baseball. Bowling was my favorite sport, for sure,” he said. His bowling aspirations got pushed aside, however, when he found out he also had exceptional skills throwing a baseball.
Burkett pitched for the San Francisco Giants, Florida Marlins, Texas Rangers, Atlanta Braves and Boston Red Sox during a 16-year career that began in 1987 and ended with his retirement in 2003 at age 38. He posted a 166-136 record with 1,766 career strikeouts. He was an all-star with the Giants in 1993 (when he contended for the National League Cy Young Award with a 22-7 record) and in 2001 with the Braves.

“A lot of these guys (bowling in the Summer Swing) don’t understand that I’m kind of in awe of them,” he said. “Guys like Pete Weber and Norm Duke and Parker Bohn and Walter Ray Williams were my bowling heroes when I was younger. I’ve never missed a PBA show on TV since I was six or seven.

“Even when I went to spring training, I had my VCR in the car so I could tape shows and I had two bowling balls in the front seat of my car. I drove to spring training one time and my wife – my girlfriend then – had make the trip from Pennsylvania to Arizona with her feet on the balls,” he added with a grin. “And during spring training, I’d find some little local tournament with a $50 first prize for whatever. I couldn’t wait for our workouts to be over to I could go bowl.

“I’ve been a PBA fan my whole life. I’m pretty much the same age as these guys, but to be able to hang out with the guys I followed all those years? Absolutely that’s what I want to do,” he continued. “Ultimately the goal would be to win one of those events. I’m not sure I have a chance, but I’m not afraid to put in the work, and I like the challenge.”

PBA fans will remember that Burkett bowled in a handful of PBA Tour events a few years back. He made his debut in 1990 in Pinole, Calif.

“When I was with the Giants, word got out that I liked bowling, so the PBA invited me to bowl in Pinole,” he said. “I also bowled in Sacramento, an ABC Masters, the Days Inn Open in Dallas – where I was in the cut until the last squad and finished 32nd,” he said. “I bowled when my baseball schedule allowed and when it wasn’t inconvenient for my family. I kind of picked my spots.
“I’ve gotten rusty,” he added. “I blew my right knee out skiing two years ago, and it’s just getting back to normal. I’m bowling about 30 games in league and I bowl the USBC Open Championships. I’ll do these (Summer Swing) events and I’m looking at bowling in the PBA World Series in Las Vegas this fall.”

Oklahoma’s Grand Casino Resort PBA Summer Swing gets underway with the PBA Wolf Open Monday. Squad A (half of the field of 120 players) will bowl their six-game qualifying round at 8 a.m. Central; Squad B bowls its six qualifying games at 2 p.m. The top 18 players advance to an additional six-game qualifying round at 7:30 p.m. After 12 games, the top five players earn berths in the Wolf Open stepladder finals that will be contested on Saturday at the Grand Event Center for airing on CBS Sports Network on Tuesday, June 3, at 7 p.m. ET.

For a complete roster of players entered in the PBA Summer Swing and their respective squad times, click here: http://www.pba.com/Rosters/Details/1943.