Male and Female American Bald Eagles, similar, but not the same 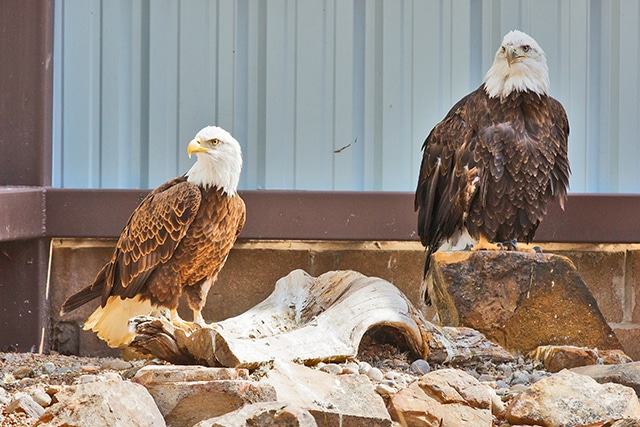 For most people, catching a glimpse of the American Bald Eagle is a rare event. Even for tribal members and visitors to the CPN Eagle Aviary, the opportunity to see an eagle up close is a moving experience. Despite their name, bald eagles are actually not bald at all. The word “bald” is an archaic old world reference from the word “piebald”, meaning marked with white.

The most obvious differences between male and female Bald eagles are their size. Females are usually a third of the size larger than males. Females tend to weigh between ten to fifteen pounds more. Females will typically have a wingspan of up to eight feet. Whereas the males weigh between five to ten pounds less, with a wingspan reaching up to six feet.

“Bergmann’s rule”, makes things a bit more complicated: Bald eagles living farther north (in Canada or Alaska, for example) should be larger than those in the southern United States.

There is not always a definitive, clear separation of the sexes based upon size and weight. For example, the largest northern male eagle may be as big as or even bigger than the smallest southern female. Sometimes the only way to actually tell the difference between the two would be a physical examination or DNA feather testing.

With the female’s larger size, this generally means a larger hooked beak and a hallux (back, largest talon) that can reach over three inches in length. There are also subtle differences in their vocalizations. Many times these differences are not even discernable to human ears.  Females often times have a lower pitched call while the male tends to call with a higher pitch.

This characteristic of the females being larger can be seen in all birds of prey. The scientific term for this size phenomenon is known as “reverse sexual size dimorphism.” The females do the majority of the incubation when it comes to nesting, and the males do the hunting. The size difference fits perfectly for their duties; males’ smaller, sleeker body enables them to be slightly better hunters and the females’ larger size allows her to sit for longer periods on the nest. The larger size in females is also a great deterrent for predators approaching the nest.

Another notable fact among Bald eagle females is their dominant personality and protective nature. Bald eagles have a monogamous mating system. These birds mate for life, many times not even choosing another mate when one of the pair passes on.

Many of these unique characteristics and personalities can be witnessed everyday here at the CPN Eagle Aviary.

If you’d like to see these characteristics in person, schedule a visit to the CPN Eagle Aviary by calling Jennifer Randell at 405-275-3121.