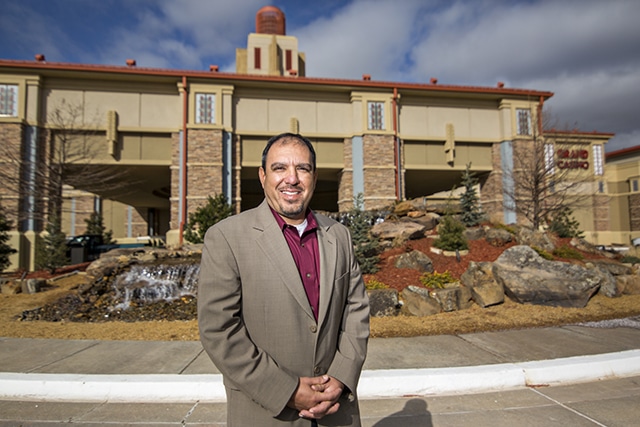 Citizen Potawatomi Nation’s prosperous and diverse presence in Pottawatomie County continues provide numerous opportunities for tribal members, current employees and Oklahoma residents. That opportunity often comes from the “promote from within” policy at CPN and has allowed many employees to make their career working for the Nation.

An example of that is Joe Garcia; a onetime lawn care specialist for FireLake Golf Course is now the General Manager for the Grand Casino. Joe Garcia, like many other CPN employees, was just looking for a summer job. Little did he know, with 22 years in the making, Garcia would find himself in a very integral position to help the tribe grow.

Garcia, a native of Brownfield, Texas, was on a baseball scholarship at New Mexico Junior College when he got a phone call from the head coach at Oklahoma Baptist University. That coach offered Garcia the opportunity to transfer and play ball at OBU. Garcia moved to Shawnee, Okla. the following year in pursuit of his physical education degree. While at OBU playing baseball, Garcia met Brian Capps, son of Vice-Chairman Linda Capps.

One day, Brian suggested that Joe look for a summer job at CPN.

“At the time, I was only seeking part-time work since I was attending college full time. My good friend Brian recommended that I check out the golf course for some seasonal help. I went in the next day to apply and have been with the Tribe ever since,” explained Garcia. “The reason I continued working for the tribe, even after college, is that people here believed in me and gave me opportunities that I don’t think anyone else would have.”

Working his way up for the tribe throughout the years prepared Garcia for his newest assignment as General Manager of one of the state’s largest casino and resort destinations. He credits his father for giving him his “can do” attitude and work ethic.

Starting out as lawn maintenance, Garcia utilized his bachelor’s degree in physical education to work his way up to recreational director for CPN.

“In 2001, the executive branch decided to convert the old bowling alley into what is now FireLake Entertainment Center. That’s when I decided to get into the gaming business,” explained Garcia. “There was something about the fast pace, the need to be alert and just that exciting feeling that you get in the gaming community. I knew that’s what I wanted to get into considering my competitive nature. It was one of the best decisions I’ve ever made because it’s something that I am passionate about.”

In Oklahoma, the gaming community is highly competitive enterprise with 38 federally recognized tribes in the state. So staying ahead of the game is the key to success.

“Right now, our focus is on our new restaurants, The Grand Café and Flame Brazilian Steakhouse, as well as the Grand Event Center. However there are a lot of other great things coming to the Grand. Our goal is to set the bar high, not only for how casinos should be managed and operated in Oklahoma, but how they should be managed and operated across the country,” stated Garcia. “Citizen Potawatomi Nation is known for being innovators and that’s what we’ll continue to be. Our gaming center is state of the art. We receive phone calls and questions daily on how we operate and what new things we’ve done to stay ahead of the game.”

When he’s not overseeing one of the largest gaming centers in Oklahoma, Garcia enjoys time spent with his wife and children. The family man stays humble by cooking Texas-inspired meals and coaching his two sons’ baseball teams.

“One of the things that I love the most about Citizen Potawatomi Nation is that they treat you like family. I’m a family guy and the tribe has treated me with only respect and kindness since the first day I worked here,” said Garcia. “That atmosphere is what I love the most, and as the new GM out at the Grand Casino, I am going to do my best to provide for my family and the people of Citizen Potawatomi Nation.”