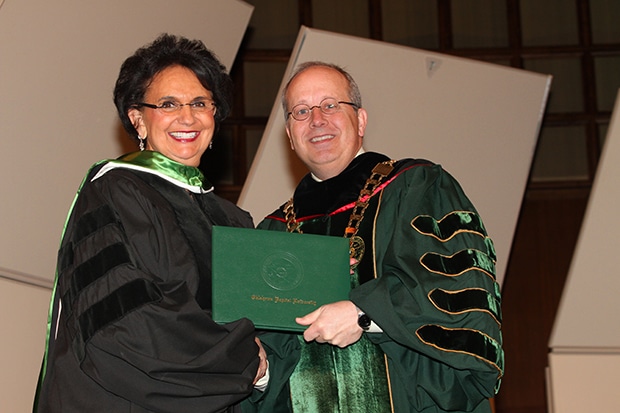 Longtime educator and tribal leader Linda Capps was honored for her decades of service during the 2014 Oklahoma Baptist University Founder’s Day celebration. Capps, who in addition to serving as CPN Vice Chairman since 1990 is a board member of the Oklahoma City Branch Bank of the Kansas City Federal Reserve, was conferred as a Doctor in Humanities by the Shawnee, Okla.-based institution.

“I wasn’t expecting it, but it is an honor to be awarded a PhD from such a prestigious university,” said Capps. “I want to thank President David Whitlock and the OBU faculty members for the honor.  Having this bestowed on me while my family and friends were there is something I’ll always cherish.”

In a letter to Vice Chairman Capps notifying her of the award, OBU said it was awarding the degree “for her outstanding accomplishments as an educator, community leader and elected official…In honoring Linda Capps, Oklahoma Baptist University is keeping faith with the high ideals we have set for granting such degrees.”

During her response at the luncheon, Vice Chairman Capps thanked her family, including son Aaron and her three siblings, Eddie Moore and wife Sue, Marilyn Clark and husband Don and Rosa Reed and husband Hub.  She closed by  mentioning she now has a degree from OBU to go along with her son Brian Capps’, a 1993 graduate.