FireLake Entertainment Center GM looks back on 22 years of service 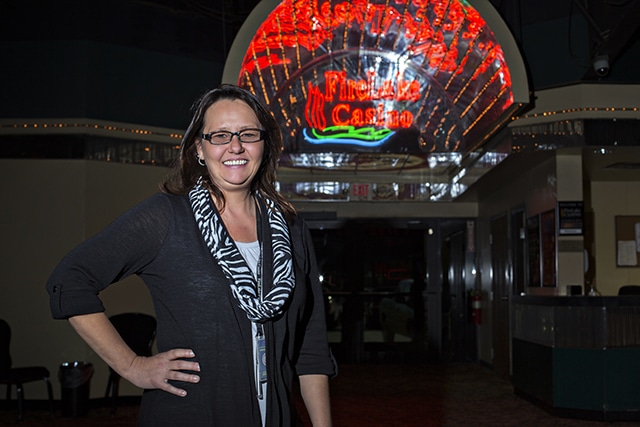 Linda Canada was 19 years old when she moved from Quitaque, Texas to Shawnee, Okla. with her immediate family. Her familiarity with the Citizen Potawatomi Nation began when Canada was playing at the old bingo hall, before the tribe ever owned a casino. She picked up an application during one visit and the rest is history.

It was 1992 when Canada started working at the bingo hall now known as the FireLake Entertainment Center. She had seen a ring at a local jewelry store and started to work at The Bistro restaurant inside the bingo hall to make money to buy the precious gift.

“I thought I’d work here until I could afford the ring and then I’d find something else to do,” recalled Canada.

More than 22 years after first eying that ring, Canada is the general manager of FireLake Entertainment Center and manages every position she once held.

Whether it was working at The Bistro, the cashiers’ cage, auditing or as a slot tech. If there was, is, or will be a position at FireLake Entertainment Center, Canada has done it all. When asked about having a degree or going to college Canada replied, “FireLake is my degree.”

The way Canada talks to about working at FireLake you can sense the way she feels about it. As far as supervisors go, she’s been in all of her employees shoes and understands the gaming community.

“After working here for so long, I feel like this is my family,” she said. “I just can’t see myself working anywhere else.”

Chad Mathews, the marketing manager at FireLake Entertainment Center, has been Canada’s colleague for several years.

“Linda is absolutely fantastic to work with,” said Mathews. “She has a great spirit about her and is one of the best in the business at what she does.”

Canada attributes the great experience that customers have at FireLake to the casino’s managers and employees. As a manager, she relates well with those working under her direction, a tribute to more than two decades in a casino. Though things may be stressful, Canada knows that that sometimes, despite everyone’s best efforts, things don’t always go as planned.
Attesting to her humble kind spirit, when asked what it is like working in the gaming community for so long, Canada replied “at FireLake we have a “Cheers” kind of vibe, ‘where everyone knows your name’. Working here is like the Hotel California, you can check out anytime you like, but you can never leave.”

When it comes to the future Canada says she is excited about what’s happening at CPN.