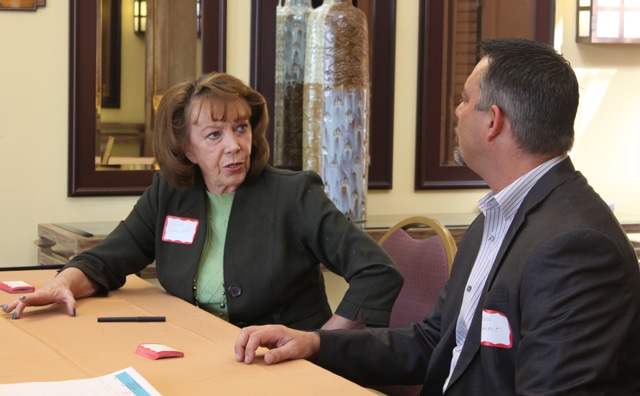 Describing why she decided to serve in the CPN government, as a regional director and as current system as District 5 legislator, Arizona’s Gene Lambert says “It’s like the knowing when you hear something right. When you know, you know.”

Like her counterparts in the CPN Legislature, Lambert is enthusiastic about her work with the tribe.

Originally from San Jose, Calif., Lambert grew up in the state’s agricultural heartland in the San Joaquin Valley. Her father, Charles Edward Lambert, was a descendent of the Navarre and Melot families. His family relocated from Oklahoma to California at the turn of the twentieth century.

Lambert grew up knowing of her Potawatomi background, but admits that it wasn’t a traditional Native American upbringing.

“We didn’t speak about being Native American, because at that time, people in my generation didn’t talk about it openly. But Legislator Gene Lambert you get to a certain age and say, ‘Hey, I don’t care, I want to know about my heritage’.”

Starting in the mid-1980s she began to learn more about the tribe and eventually received her tribal ID card. She began travelling to regional meetings and large gatherings held in Shawnee at the tribe’s headquarters. It was at the old intertribal pow-wow that she finally felt like she was in the right place.

“First time I came to Shawnee in the late 1980s, I saw this little boy who was a fire dancer,” said Lambert. “I watched him dance for three hours, just in awe. Watching him and being there, it just felt right. Looking back, there isn’t any place else I feel I belong.”

Her professional experience of working in politics in her home state of Arizona laid the foundations for her decision to serve in the tribe’s government. She worked on legislative campaigns for Arizona legislators. Between stints in politics, Lambert has always been a religional researcher. Her spirituality is evident in her role as a legislator, as she pointed out the important connection between the tribe’s current government and its constituents.

“For many tribal members, this is the biggest thing happening in their lives in terms of going to regional meetings or the family festival. It gives them a place to belong. It’s their pride and joy,” she explained. “Chairman Barrett and Vice Chairman Capps work so hard to create a family atmosphere for our tribe and I know it means a lot to Tribal Members,” said Lambert.

“I joined on as a regional director for nine years and then as a legislator. I like to be a part of it all, to help serve the people and share in that experience.”