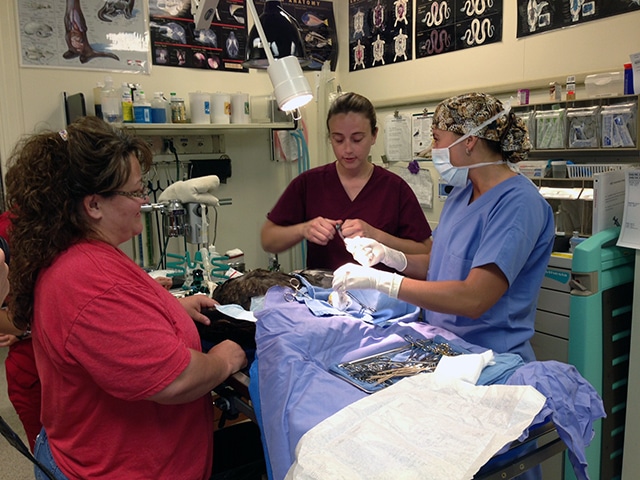 It is majestic.  A national symbol of pride, the bald eagle sits atop the food chain and is something to behold. OSU’s Avian, Exotic and Zoo Medicine Services had the pleasure of treating not one, but two bald eagles from the Citizen Potawatomi Nation Eagle Aviary.

Gracie, a 12-year-old female, came in with a growth under the third toe on her left foot.

“It grew in less than a week,” says Jennifer Randell, CPN Eagle Aviary manager.  “We were concerned it could be cancerous.”

Two weeks later, the diagnostic results were in and the mass is benign.  Gracie was given antibiotics and remained a patient for several weeks.

“There wasn’t enough skin in that area to suture the opening so we had to wait until it healed before she could return to the Aviary,” explains Woods.

Dr. Woods and Jill team up to change Gracie’s bandage.  Her talons are strong, her sturdy beak sharp and while she has been living at the Aviary, Gracie is still a wild predator.  Jill wears protective gloves that reach her shoulders. Grasping Gracie’s ankles, Jill holds the bird in front of her body as Dr. Woods puts a blanket over Gracie’s head to prevent the eagle from biting either one of them and to reduce her stress. Then Dr. Woods wraps Gracie’s talons to avoid being injured while she tends to the wound.

In the meantime, another bald eagle arrives from the Aviary—a 2-year-old male.

“He is just starting to turn white on his head and tail,” says Murray.  “His wing was partially amputated after he fractured it sometime ago and Dr. Woods had to go in and take more off the wing because the previous surgical site had become open and infected.”

“The incision line is higher up on the wing so that when he hits the sides of the cage with the end of his wing, the incision won’t break open,” explains Woods.  “I made a ‘V’ shape incision and put about five sutures on one side and six on the other.  It, too, is healing well but I’m not yet ready to leave it uncovered.  We’ll check it again in a few days before we return him to Jennifer.”

“The first goal is to save the eagle’s life,” says Randell.  “However, you can’t put a crippled eagle in the wild so we provide an environment intended to replicate a portion of their wild habitat.  Providing a home for the eagles gives us a way to educate our young people about these magnificent creatures and the role they play in our heritage.  Having the eagles is also a source of naturally molted feathers for tribal members to use in cultural ceremonies.”