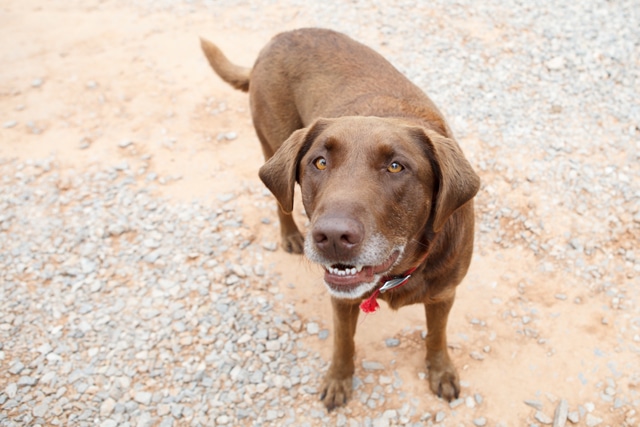 “To step onto a golf green and recognize and diagnose a disease affecting its health is a science,” said FireLake Golf Course Director Chris Chesser. “We’ve known about Derron’s work at golf courses around Oklahoma. We know he’ll immediately begin making FireLake one of the state’s best public courses.”

Assisting Day in his work on the course is another new staff member, Scout, the Chocolate Labrador. Scout is an important part of the golf course’s operations, especially given FireLake Golf Course’s numerous lakes. Canadian Geese, whose migratory path takes them across Oklahoma, tend to settle down near water sources instead of migrating . FireLake’s ponds and creeks have become a haven for the geese, who are a hazard to the putting greens.

Golf course dogs like Scout are trained to chase geese and other vermin, like gophers, away from the course’s most vulnerable areas.

“He’s very good at tracking gophers,” explained Day. “Labs have such a keen sense of smell that out of 20 holes, he can find the one that actually has the gopher.”

Scout’s parents were both golf course dogs, at Tulsa Country Club and White Hawk in Bixby, Okla. Scout has been with Day since he was seven weeks old. He trained alongside an older canine at the Muskogee Golf Course during Day’s service as superintendent there.

Since the move to FireLake, Scout has been a hit with the FireLake’s golfers. He rides in golf carts, isn’t afraid to chase geese into water and appears to have only one fear, thunder.

While golfers have grown fond of Scout, Day looks at his companion as a tool to be utilized in making the course as high quality as possible.

“He’s just like anyone who works out here in my mind,” said Day. “He’s just an employee that we pay in a different fashion.”

FireLake Golf Course is rated in the top 10 of daily fee golf courses in Oklahoma. The challenging course offers tight fairways lined with pecan trees, native grasses and lots of water hazards. Water comes into play on 15 of the 18 holes, including 11 lakes or ponds and a creek that runs through the middle of the golf course.

The greens, which have been converted to Champion Bermuda, average about 8,000 square feet in size with lots of undulations. The golf course’s amenities include a putting green, driving range, snack bar, restaurant, and golf shop.

The course is open year round, weather permitting, with the exception of Christmas. Green fees are $17, $27 with cart rental. Discounted annual memberships are available to tribal members. To book a tee time or learn more information, please call 405-275-4471.