PLP Class of 2013 closes out summer program with presentations, reflections 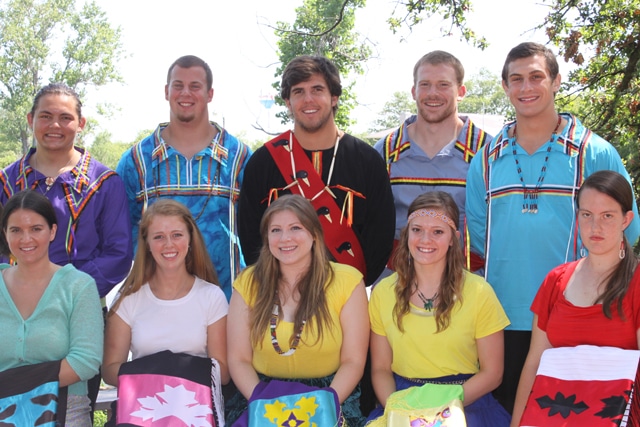 The 2013 Potawatomi Leadership Program (PLP) students completed their final requirements to conclude the summer’s internship. Program participants initially paired off to work on a joint project that focuses contributing to the tribe’s services or work. During the course of the program, they visit the different tribal departments and are encouraged to consider what they would to do to add to the tribe’s work and services. These ideas translate into their final projects, and along with a personal reflection on their experience as PLP members, the students present their results to an assembled audience of CPN tribal leaders and employees.

Bradley Archer, of Milliken, Colo., has been heavily involved in leadership organizations over the years, and viewed the PLP as an extension of these experiences.

“I was looking for a new way to find leadership, another line to put on my resume,” he explained. “But this was so much more.”

Archer, whose Potawatomi name is Monkwabaset (‘He seeks to prepare for spring’) partnered with Breeanna “Cloud” Hamilton of Laverne, Calif. on their final project, a lesson plan for the tribal youth organization.

“Our project is a fine art lesson plan with a cultural influence that really emphasizes family and heritage,” stated Hamilton. “We both felt that a fine art week with an emphasis on culture would be really beneficial to the kids at the P.L.A.C.E. as well as tie in our original idea about culture.” 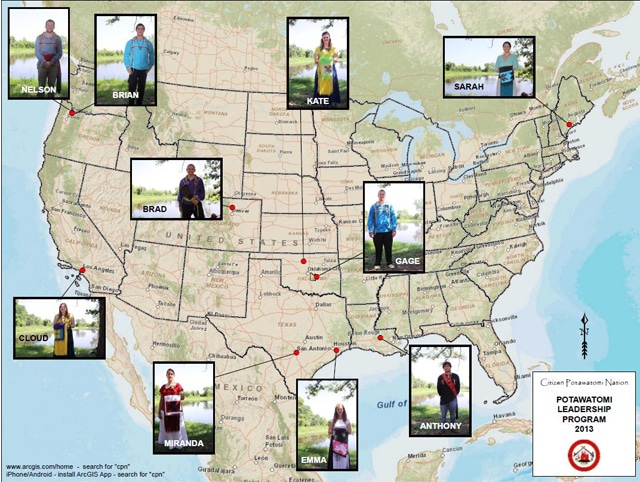 Miranda Hazelton of San Antonio, Texas elaborated on her initial thoughts on attending the PLP.

“Every time I hear someone say how thankful they are that we gave up our summers to come here, I want to interrupt them and explain how I really haven’t given up anything. I want people to understand that if I had not been a part of the Potawatomi Leadership Program, I would have spent three whole months hot, bored, miserable, and freaking out about college. Instead, I got to have a life changing experience that I wouldn’t give up for the world.”

Hazelton and Sarah Sandlin of Topsham, Maine worked on developing the PLP’s first ever Alumni Association as part of their final project, something many felt was a long time in coming. By first locating and identifying where PLP alumnus live, Hazelton and Sandlin envision that eventually the network can hold events in conjunction with CPN regional meetings and annual Family Festival.

“We hope that our proposal might spark somebody’s interest and that they will run with it,” said Sandlin. “When a group of strong leaders from such diverse backgrounds come together, anything is possible. A united force of the nation’s ‘best and brightest’ is something that should be fostered.”

Kate Anderson of Enid, Okla., looked forward to relaying her experiences to her grandmother who while Potawatomi, was not raised with extensive knowledge of the tribe’s history and traditions. She elaborated on the dynamic that many tribal members hear about their decadency.

“Before I got here, I felt like I was part Potawatomi,” Anderson said. “But after learning about our traditions and how we view tribal membership. I know that I am not part anything. I am Potawatomi.”

Brian Wojahn of Portland, Ore. worked with Anderson on a showcasing the different styles of dance that attendees see at the annual Family Festival. With the help of tribal members and employees who dance competitively, along the assistance of Bradley Archer in running the video equipment, they created a film exhibiting the dances.

Regarding his PLP experience as a whole, Wojahn commented, “I came here very wide-eyed, but I will be leaving with a much greater understanding of what it means to be the Citizen Potawatomi Nation. Even though I am far away from my home in Oregon, I feel like I am at home.”

Milwaukie, Ore.’s Nelson Wadman recalled his initial thoughts on being accepted to the PLP class of 2013.

“When my family heard I was going to Shawnee, they all told me that there was nothing there but flat, bare land complimented with humid air,” he said to laughter from the audience. “Before I arrived in Shawnee, I had no real sense of who I was as a person. I owe my tribe a lifetime of service for what it has given me. I now have not only a sense of belonging to a great people but also a sense of purpose and I want to do in my journey through life. I was lost and you showed me the way home.”

Wadman and Anthony Lacombe of Baton Rouge, La. worked on a tool that would help PLP members of the future.

“We started talking about how blind we were coming into this program and tried to brainstorm on how we could help future students avoid this,” explained Lacombe. “We combined our information into a PowerPoint that future students can look at to have a better understanding of how this program is designed to help them become better leaders and more in touch with our heritage. We also took our presentation and created a small brochure to further explain the Potawatomi Leadership Program. Between the brochure and power point I believe that future students will have a better understanding of what they are signing up for.”

Gage Johnson, a local from Seminole, Okla., followed in the steps of his older sister who is an alumni of the program.

“This summer has surprised me to say the least. I expected to be stuck in an office every day, hearing about disinteresting things from morning until dawn. Now, I can hardly believe that’s what I expected from this. From the jump, this experience has been one that I will not forget.”

Johnson and Emma Brant of Taylor Lake Village, Texas combined their interests of sports and teaching to develop a lesson plan that introduced Potawatomi youth to the Native American game of stickball.

Brant admitted in her final remarks that she felt a lack of closeness to the tribe due to the distance between her home in Texas and the tribal grounds in Shawnee.

“But as the time passed I learned that I really was a part of this family and tribe,” she remarked. “One of the things that has resonated with me the most since we have been here was something that we heard from (Director of Health Services) Tim Tallchief the very first week that we were here. ‘Never tell someone you are part Potawatomi’ he said. You aren’t part Potawatomi. You are Potawatomi.’ ”

The Potawatomi Leadership Program is designed to educate, inform, and encourage qualified Potawatomi students and to develop within the tribal membership at large a more accurate perception of the tribe and its operations. For more information visit https://www.potawatomi.org/services/education.