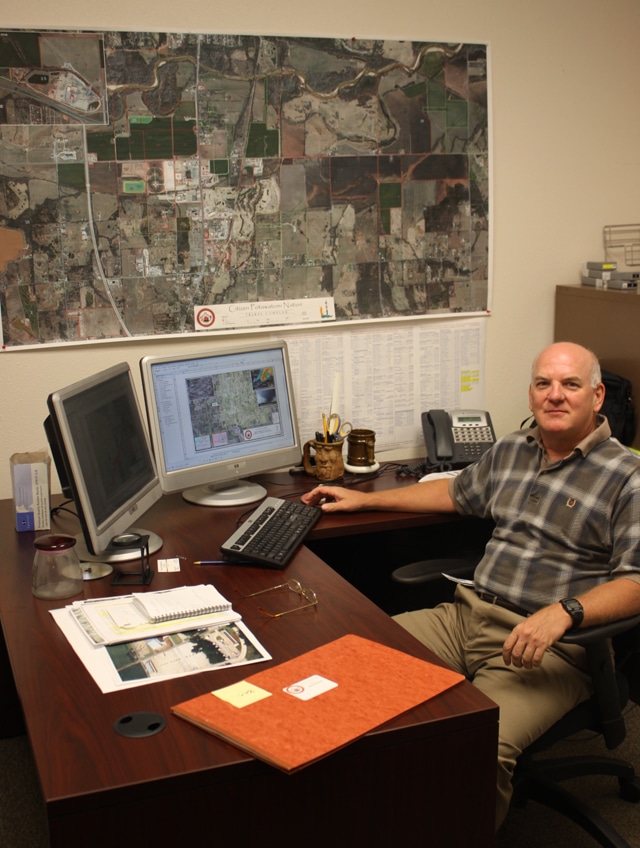 CPN’s overall economic growth during the past decade has been a catalyst in developing the tribe’s physical infrastructure. Before a single foundation is laid or rivet is driven, planners must assess a number of factors to begin construction. Prior to even that, learning about the surrounding property and topography is important in the tribe’s decision to purchase or oversee a new tract of land. In order to serve all these factors, CPN employs cartographer Tom Miller.

Miller, originally from Atlanta, Ga., admits that his method of thinking led him to choose a number of education and career paths before settling in his current position.

“I’m a graphic thinker,” he explained. “I’ve always been interested in art, but also in the technical side of things. It is why I initially wanted to be a medical illustrator.”

Eventually, Miller changed his focus and completed a degree in forestry, a choice he credits with laying the foundations for his eventual career in mapping. It was during his forestry studies that he began to understand the nuances of mapping and surveying, skills he initially learned during his time in the Navy and Army.

Eventually, Miller moved into teaching after completing another degree in Science Education. After his first year at the head of the classroom, Miller found himself on the way to Oklahoma City in search of a new start. His brother had moved to the city for a change of career, and Miller decided to follow.

One afternoon while reading in a local library, Miller came across a notice for the cartography program offered at East Central University (ECU) in Ada, Okla.

“I looked back at my previous education and work and didn’t feel like I’d really found my calling,” said Miller. “Once I started my classes at ECU, I knew that I had finally found the right path. Even better, I got a job offer before I’d finished the degree.”

Miller worked for Oklahoma City-based engineering firms that conducted mapping of airports and oil and natural gas infrastructure. He worked on projects that enhanced the Port Authority of New York’s airport system as well as the World Trade Center in lower Manhattan.

Over the course of his career as a cartographer, Miller has seen firsthand the evolution of the industry with the expansion of technology. Geographic Information Systems (GIS) mapping is the most significant change in this regard. GIS mapping allows information, such as structures or utility lines, to be overlaid onto electronic maps, giving planners an opportunity to view relationships that would have otherwise taken more time to analyze.

“It layers data on top of a map,” explained Miller. “For people planning construction projects, like we are at CPN, it allows us to see relationships between utility lines and structures on the land being improved. Where it used take three maps with three separate sets of information, GIS allows all of the data to be accessible on one map.”

It isn’t just construction and utility planning though. In the aftermath of the tornadoes that leveled large parts of Cleveland and Pottawatomie counties earlier this year, Miller put his GIS expertise to use in the hours immediately following the disasters. Using a database with Pottawatomie County’s 35,000 addresses along with an outline of the tornado’s path, Miller created a GIS map that allowed first responders to confirm they had checked each residence within the path of destruction.

While he worked with county officials in this endeavor, Miller, with help from Tribal Rolls Director Charles Clark, fed a database into the map that contained the addresses of CPN members in the path of the tornado.

“With the address information Charles provided, we were able to extract the tribal members displaced or in the path of the tornado,” said Miller. “Out of 840 total addresses in the damage area, 104 were tribal member owned properties. Before GIS, trying to sort through that many addresses would have taken a couple of days. Using our system and the information provided by the county, we were able to get address information for first responders within two or three hours.”

Using the data extracted from Miller and Clark’s work, the tribe offered its assistance to members affected by the Pottawatomie Count tornado on May 19 and the Moore, Okla. tornado that followed the next day.

He has also developed a map that helps track the movements of Wadase Zhabwe, the American Bald Eagle that was released this spring by the Citizen Potawatomi Eagle Aviary. Using the tracking device attached to Wadase, Miller has plotted her movements across the tribe’s jurisdiction near CPN headquarters. In addition to entertaining those interested in keeping track of her progress, Miller’s GIS map of Wadase’s movements has helped the aviary learn more about her in a scientific sense.

With these experiences in mind, Miller looks back on his path to CPN and expresses his enjoyment in working for the tribe.

“I like that I get to work with every department, whether its construction, environmental or even accounting. I’ve gotten to interact with all the different departments and their employees, and with all the projects and plans the tribe is working on, it keeps my work interesting.”