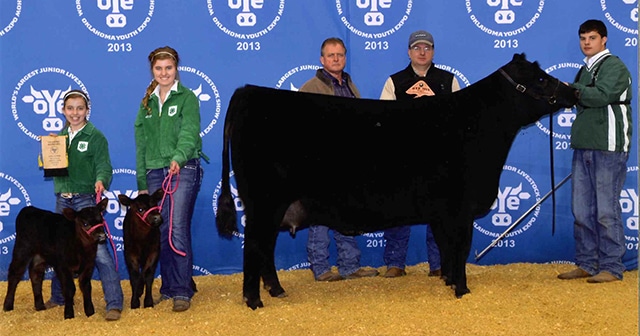 Citizen Potawatomi Nation tribal member Kody Silas starts his day early. Every morning at 6:30 a.m. Kody wakes up and goes to the barn to feed his cows. After that, he’s off to high school, then homework, then back out to the barn to wash and dry the cows. Kody Silas has done this same routine for years, and the hard work has been noticed.

Recently, Kody won the Angus class division champion and the third best overall in Angus breed at the Oklahoma Youth Expo held at the fairgrounds in Oklahoma City. Kody received a $500 scholarship from the Angus Association.

Kody has helped his father, Kurtis Silas, raise cattle since he could walk and began showing cattle in the seventh grade. Kody will be a senior at Tecumseh High School in the fall, where he ranks in the top 10 percent of his class.

Kody also won first in class with his Chianina heifer and was in the finals in the sure-champ showmanship.

After graduation next year, Kody would like to attend college to study agricultural engineering and maybe show on the college level show team.