Potawatomi Constellation story – Why the bear has a short tail 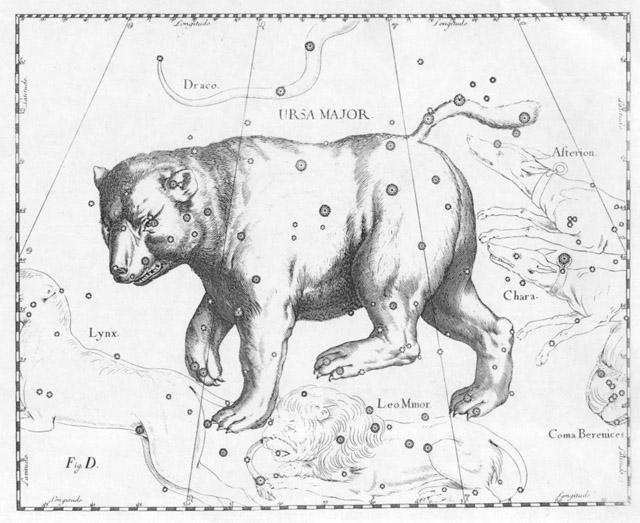 Long ago, the ancestor of today’s bears looked somewhat different from his modern day descendants; most notably he had a very long tail. One long winter, the bear was very hungry, and spent many hours fishing on a frozen lake with little success, having only caught three small fish.

The fox, watching from some distance, approached the bear and said “I have a technique that can help you catch many more fish than that. You’ll be eating for days. If I show you how, all you have to do is give those fish you caught. They’re far too small to fill you up anyway.”

The bear thought about it and agreed, and gave the fox the small fish to eat. As the fox finished, the bear became hungrier and began to get angry. He demanded that the fox show him how to catch as many fish as he could eat.

“Dig a hole in the ice,” said the fox, and the bear punched a hole in the frozen lake with his paws. “Next thing you want to do is put that long tail of yours down in the water and wait. After a few minutes, a fish will take a bite of your tail, and all you have to do is pull it out of the water. Just keep doing that and you’ll catch as many fish as you could ever want.” 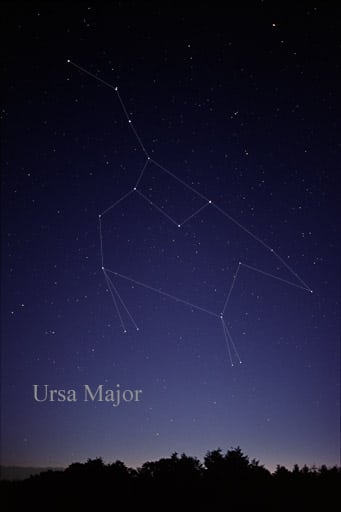 The Bear with a long tail. Source: www.allthesky.com

Satisfied with this plan, the bear sat down over the hole he had dug, his tail dangling in the cold water. Seeing this, the fox ran off across the lake at a quick pace, occasionally looking back over his shoulder at the bear sitting over the hole in the ice.

Before long, the bear felt a bite at the end of his tail. Thinking he didn’t want to keep putting his tail back in the cold lake, he decided to wait until he had several bites at once before hauling his it up. He hoped to catch a large batch of fish all at once rather than pull them out one-by-one. A few minutes later, the number of bites increased and he finally decided it was time to pull his tail out, so he jumped up as fast as he could. Turning around to see how many fish he’d caught, bear noticed his tail was frozen into the iced over hole. What was left was a short, stubby version of the longer tail.

The point of the story was an ancient way to describe the constellation of Ursa Major, which is visible most of the year in the Northern Hemisphere.The knowledge of constellations and use of stars was vitally important to the Potawatomi, especially during their time living around the Great Lakes region. Travelers would use the stars as a means of navigating the lakes, especially important given their immense size.