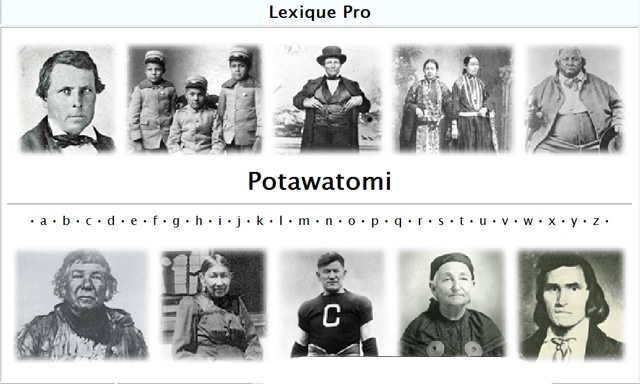 Learning a new language is difficult in any situation, especially when the language isn’t widely spoken. Tools like classes, dictionaries and labeling of everyday objects can go a long way in helping people pick up words or phrases. However, if those tools are lacking, the difficulty of learning increases exponentially.

“As Potawatomi descendants, we were pretty fortunate to have several dictionaries made by 19th century missionaries who met our ancestors in the Great Lakes region,” explained CPN Language Department Director Justin Neely. “The problem with them is that many of the words and phrases are out of date. They also lack example sentences, so it is difficult to understand them in the right context.”

In an effort to produce a tool that would be available to users across the North American bands of Potawatomi, Neely and other language department staff Samuel Navarre and Randy Schlachtun have been inputting words into a soon-to-be published dictionary.

The dictionary is made with the software program Lexique Pro, the computer-based dictionary will not only feature words, their definitions and pronunciations, but also video and audio files. For those not computer savvy, the dictionary has a function that will format the document into a readable file that is easily printed off.

“The audio files will be cut from recordings that we language departments have collected over the years,” said Neely. “With many non-native speakers like me, we speak Potawatomi with an accent. This new dictionary will allow people to hear recordings of native speakers, many of whom have passed away. It’s an invaluable tool for keeping the language alive.”

Most tribes have members who have collected words over the years and created their own forms of dictionaries. The CPN Language Department’s efforts are a culmination of the years of collecting on scraps of paper, notebooks and in electronic files.

“Both Forest County Potawatomi and the Prairie Band Potawatomi have their own dictionaries coming out, and we’re really excited about those,” said Neely. “Hopefully ours, once complete, can be another tool for learners because basically, it’s just a tool to make the language more accessible for people.”