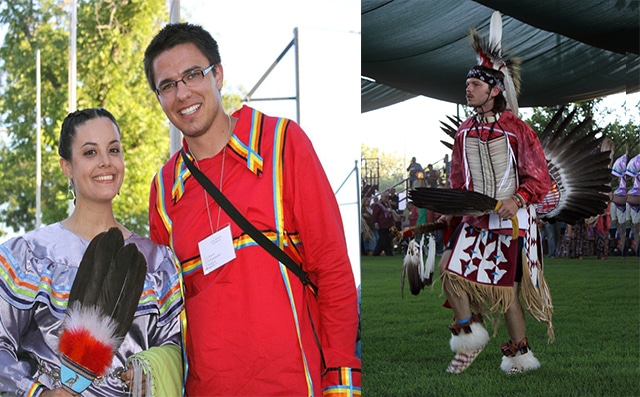 Austen, a member of the Vieux family, is 2011 PLP alumni. Austen is currently a student at The University of Oklahoma and is a double major in microbiology and Native American Studies.

Austen’s regalia was pieced together by several people. The crimson color was intentional to reflect his birth order and to show pride in his school.

“I’ve only been dancing for the past year and I was very surprised when I won. There were a lot of great dancers,” said Austen. “It’s an honor to even place. I will absolutely dance again.”

Tesia, a member of the Whitehead & Weldfelt families, isn’t a PLP alumnus, but has helped with the program for several years. She has competed at Festival for the past four years.

Tesia’s regalia was designed to reflect her Potawatomi name, Jejakwi, which means “Like a Crane.” She also carried an extremely special eagle feather fan which was gifted to her by the CPN Employment and Training department to honor the receipt of her Master’s degree.

“I was shocked to hear my name,” Tesia said. “The competition this year was so stiff that I truly believed that I did not even have a shot at placing. In my memory, this was the most women competing, and as I knew many of the participants, I knew that each woman would do her absolute best. I was honored to compete with them, and I hope to get the opportunity to dance alongside them for many years to come.”