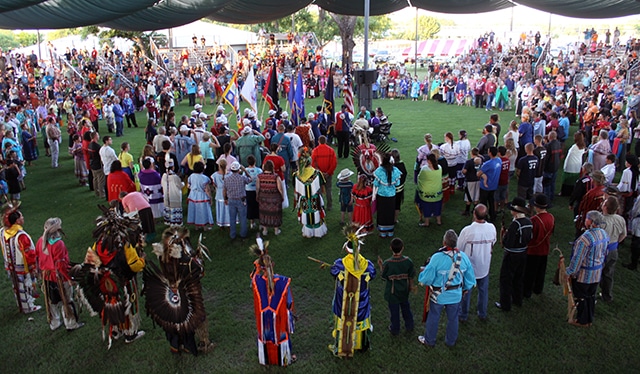 More than 5,000 people from 39 states descended on the town of Shawnee the weekend of June 28-30 to celebrate their Citizen Potawatomi Nation heritage. The annual Family Reunion Festival attracts people from all across the United States and has a considerable economic impact on Shawnee.

“Events that draw visitors from outside the area are always welcomed in the community,” said   Tim Berg, executive director, Shawnee Economic Development Foundation. “Those visiting individuals will purchase goods and services while they are here, which is always welcomed, but more so we also hope they receive a warm welcome in our community and visit us often.”

Visitors to the Family Reunion Festival often stay more than just the weekend and spend time shopping and dining in Shawnee. Michael Bourbonnais and his wife Vivian came from Fresno, CA for festival.

“We will stay here for a week and we’ll also be going to the Choctaw Nation,” said Bourbonnais. “I haven’t been here since 1982, but I like Shawnee very much and we’ll come back to visit. I’d maybe even like to live here.”

The Citizen Potawatomi Nation Family Reunion Festival began as a Tribal Powwow, drawing Native Americans from all over the country. After decades as one of the premier powwows in the region, the CPN made the decision to change the event to the Family Reunion Festival, open only to CPN’s enrolled members and employees.