History of the Family Festival

As the Family Reunion Festival approaches, CPN members from across the country will descend on the old tribal grounds south of Shawnee, Okla. to see family and participate in the festivities. But more than a decade ago, the participation of Potawatomi at the event wasn’t a guarantee. CPN hosted one of the region’s more popular pow-wows, drawing Native Americans from all over the country. But that popularity came at a cost, with tribal members ending up as spectators at many of the event’s activities.

“I remember that at one point, it was just too much. We were feeding everyone who came out, whether they were Native American or people from the towns around here,” said tribal elder Mary Powell.

After decades as one of the premier pow-wows in the region, the tribe took the decision to change the event to a family reunion of sorts, open only to CPN’s enrolled members and employees. At the urging of Chairman John Barrett, in 1998 the pow-wow became the Family Reunion Festival, with a distinct change in the format.

“Yes some people were upset, both in and outside the tribe,” added tribal elder Beverly Hughes. “But it was the right thing to do. While the tribe was hosting the event and funding it, our people weren’t getting to fully participate.”

A common theme amongst those discussing the change from an open pow-wow to the current CPN Family Festival was that the absence of Potawatomi from the dancing competitions. 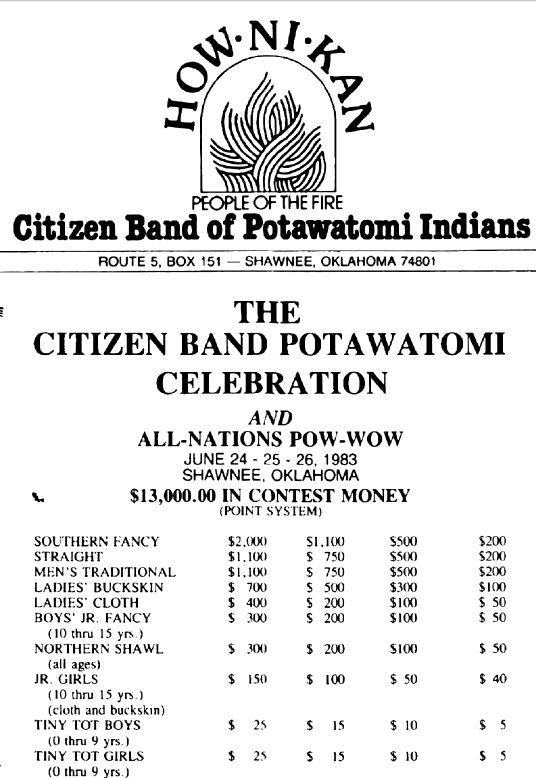 “Our tribe didn’t have a lot of dancers like others who were coming to compete here. This kind of reinforced itself, resulting in our own people not wanting to dance in the competitions,” explained Vice Chairman Linda Capps. “All told we were spending over $100,000 to put on the event and decided that we needed to focus it more for the benefit our tribal members.”

While dancing remained a centerpiece to the festivities, cultural demonstrations were implemented to teach CPN members about their heritage. Classes on ribbon shirt making, beading, language classes and fan making were all started to teach tribal members about Potawatomi culture.

Outside of the dancing, other competitions including basketball and volleyball tournaments, archery and Potawatomi hand games were started.

During the old pow-wow, CPN members often described the difficulty in identifying other tribal members amongst the thousands of other Native Americans in attendance. To rectify this, the revamped Family Reunion Festival began honoring eight “original families” at each year’s event. With the help of the staff from Tribal Rolls and the CPN Cultural Heritage Center, members of honored families have the opportunity to visit distant relatives and perhaps meet new ones at the festival.

As always, the festival ends with a general council meeting and pow-wow, but now Potawatomi are competing.

“Right before we changed it, Chairman Barrett said that the last time he went into Grand Entry and looked around, he realized that there were no Potawatomi in the circle,” recalled Powell. “They were all up in the stands watching. It isn’t like that today. Nowadays, the biggest concern is that people are wearing traditional clothing and not just tank tops and sandals.”

To register for the 2013 Family Reunion Festival, please click here.