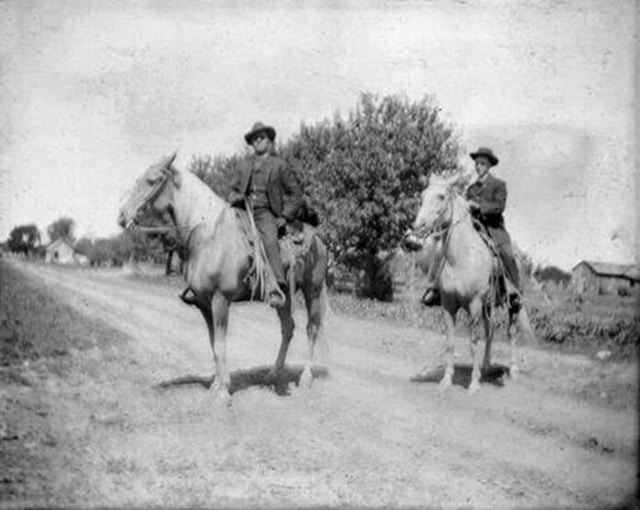 The Citizen Potawatomi Nation Cultural Heritage Center has been selected to participate in Oklahoma’s Top Ten Endangered Artifacts campaign, sponsored by the Oklahoma Cultural Heritage Trust. The program aims to increase awareness and support for Oklahoma’s most important historical objects.

In all, 25 objects have been nominated, from which ten will be recognized as the Most Endangered. These objects will be awarded the designation of a “Most Endangered Artifact,” and will receive preservation and conservation support.

Please help the Cultural Heritage Center receive this distinction by voting for our artifact at http://goo.gl/jBGmZ. You may vote often and more than once. Voting ends June 1, 2013.

The Cultural Heritage Center’s nominated artifact is a rare glass plate negative of Father Dom Bede, the first full‐blood American Indian (Citizen Potawatomi) ordained Roman Catholic priest in the United States, on horseback at Sacred Heart Mission, the foundation of the Catholic Church in Indian and Oklahoma Territories circa 1908.

Negahnquet family stories illustrate Albert’s initial interest in the clergy, “he wanted to educate the Potawatomi people in the teachings of the Bible in their own language.” Understanding his son’s path, Albert’s father, Stephen Negahnquet enrolled him at Sacred Heart Mission, known then as “the Cradle of Catholicism in the West,” at the age of thirteen. Upon the completion of his education and ordainment, Albert was further known as Fr. Dom Bede and became a fixture at local missions. His distinctive skills to lead and teach no doubt stemmed from his ancestor of the same name, Negahnquet, who was a prominent Great Lakes headman, warrior and orator.