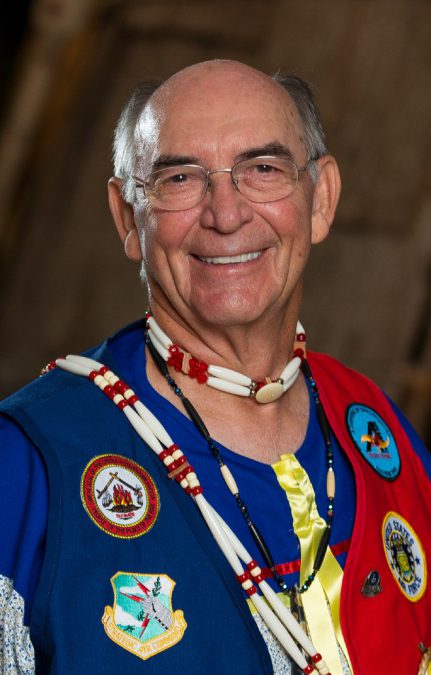 Ralph Bazhaw, a member of the Bergeron family, recently participated in a Pentecost service at his church, Faith Presbyterian Church in Greensboro, North Carolina, using the Potawatomi language.

“I am proud of my Potawatomi heritage, and I love to express myself as a Potawatomi at every opportunity,” Bazhaw said. “My minister Karen Ware Jackson is very innovative. Since our congregation is very diverse, she had an opportunity to express that diversity in a unique way.”

Five people read from John 1:1-4. The first person spoke in English, then Bazhaw spoke in Potawatomi, another in Twi, another in French and then, lastly, one in Swahili.

“The congregation said it was a moving experience because Pentecost was when people spoke in many languages but were understood in their own language,” Bazhaw said as he summarized an account of the Holy Spirit coming on the Day of Pentecost in Acts 2. “It was good for me, my church and CPN.”

He expressed his gratefulness for CPN Language Department to
the Hownikan.

“I want to thank Justin Neely for translating the scripture passage for me and also providing the audio, so I had the correct pronunciation,” he said. “I wonder how many tribes have a linguist that will give you a translation and an audio recording on such short notice. Without the resources that Justin and our tribe provide I would not be able to do this.”

Bazhaw and his family regularly attend the language lessons at the CPN Festival and have downloaded the Potawatomi dictionaries, though he still considers himself a novice.

“My wife and I say our meal prayer in Potawatomi and my children and grandchildren are also learning the prayers,” he said. “Whenever I speak before a group, I always introduce myself in Potawatomi.”

Bazhaw’s dedication to his Native heritage doesn’t stop with language. He discovered it affects him in some of his most trying and challenging times.

Chairman John “Rocky” Barrett chose the Potawatomi name Nishbonsek or “Two Hawks” for Bazhaw because of the following story.

“I was on the pastor search committee at a church many years ago for a different church,” Bazaw said. “I was eating breakfast one morning and saw two hawks sitting together on a branch outside my window. That is especially strange because hawks usually hunt by themselves, not in pairs. Later that day, I went to my friend’s house. At the end of his long driveway, I again saw two hawks sitting together in a tree. On that day, I encouraged the rest of the members of the search committee to hire a couple to lead the church.”

After receiving his Potawatomi name, he was diagnosed with prostate cancer. Two hawks visited him for another revelation.

“I was going to my son’s house. When I got out of my car, I heard a hawk call from the east and another from the west. They met above me, circled three times, then one flew north and one flew south,” he recalled tearfully. “The Great Spirit, which I believe is God, touched me that day and it was then that I knew I was going to be okay. Today I’m 10 years cancer-free.”