Accounting department earns ‘Achievement for Excellence’ 30 years in a row 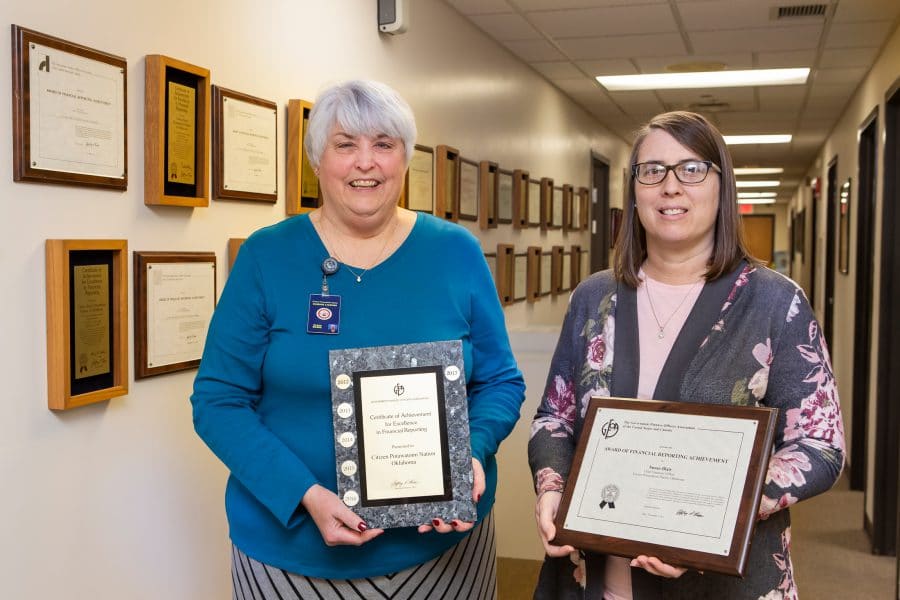 The Citizen Potawatomi Nation Accounting Department’s hallway is lined with plaques and framed certificates earned under the direction of Chief Financial Officer Susan Blair. She began displaying the accolades in celebration of the department’s accomplishments over the years.

“I know that he is extremely proud of the fact that we’ve won it for 30 years in a row,” Blair said. “If he’s got visitors in the building, he likes to bring them down the hall and show them the wall.”

According to the GFOA website, the report submitted for consideration should show the organization goes “beyond the minimum requirements of generally accepted accounting principles” with a “spirit of transparency and full disclosure.”

Throughout the year, the accounting department strives to prepare a flawless summary of the Nation’s finances.

“It’s exciting because we are one of the few … tribal entities that prepare a CAFR and that submits and gets the award,” said Assistant Director of Finance Mary Chisholm. She was recently promoted to the position and has worked for CPN for 12 years. In Oklahoma, only the municipalities of Stillwater, Tulsa, Oklahoma City and Edmond claim more recognition than CPN.

To meet the award deadline, the accounting department often submits the book filled with tables outlining yearly profits from Tribal enterprises, explanations of changes, and projects for the next fiscal period at the same time auditors approve the Tribe’s final fiscal year statements. The time crunch is stressful, and the cycle never ends.

“It’s almost immediate that you start on the next year, whether it be just cleaning up the file and getting it ready or inputting data that’s already available,” Chisholm said.

They also attempt to complete the CAFR’s checklist provided by the GFOA.

“We pool a lot of information from outside of the accounting department,” she said. “There’s an entire section of statistics that come from the programs,” including Indian Child Welfare, Workforce Development & Social Services and more.

Chisholm and Blair enjoy picking out the report’s cover the most. The past few years included monarch butterflies, the FireLake Fireflight Balloon Festival and the FireLake water tower. The book for Fiscal Year 2018 will highlight the CPN Community Garden, Gtegemen (We grow it).

“We always try and pick something new that’s going on with the Tribe,” Blair said.

The department spends a tremendous amount of time and effort to win the award, but Chisholm believes it is worth it — especially after 30 years.

“It’s a sense of accomplishment … and you want to make it as perfect as you can. I mean, there’s going to be the little things,” she said. “But when you get that certificate, then you know you did the best you could.”

CPN sends the CAFR as an overview to banks and other financial institutions while conducting loan negotiations. A copy of the certificate from the most recent award also accompanies grant applications. The report and award highlight the Nation’s economic legitimacy.

“It’s called a comprehensive annual financial report for a reason because you can really know about the Tribe if you read this,” Chisholm said. A CAFR provides a snapshot of the governmental entity’s history, current financial standings and future projections.

The department considers the book while doing their day-to-day tasks. Thinking about the larger, long-term goal drives them to keep smaller adjustments sharp and natural. Working ahead also makes implementing new financial standards easier and helps the Tribe comply sooner.

Beginning with the 2007 fiscal year report, the Tribe produced the CAFR itself. Blair has been with CPN for 30 years — the same number of Certificate of Achievements the Nation has won.

“I have to be on top of making sure all the information is correct. So, it’s pretty exciting to do it 30 years in a row,” she said. “I never thought we’d do that.”

Bringing it in-house allowed for more control over content. Tribal employees more effectively explain the changes and happenings. It also cut costs and made improvements easier.

“When they send it back and they say, ‘You’ve won the award,’ they will also send a letter that says, ‘Here are the things, the comments, that we think you need to make improvements on,’” Blair said.

“And our comments are getting fewer and fewer. … They have to find something,” she laughed.

“The wall” is now out of space; the last few years of certificates and plaques are in Blair’s office awaiting display. She is retiring soon with a perfect record.

“We have been so fortunate to have an administration that allowed us to have the most up-to-date software, hiring the best people we could find, and just getting us what we needed to do our job,” Blair said.

“I feel confident when I retire that it will just continue to go on because we have a great staff here in the accounting department. They don’t need me to put it together.”