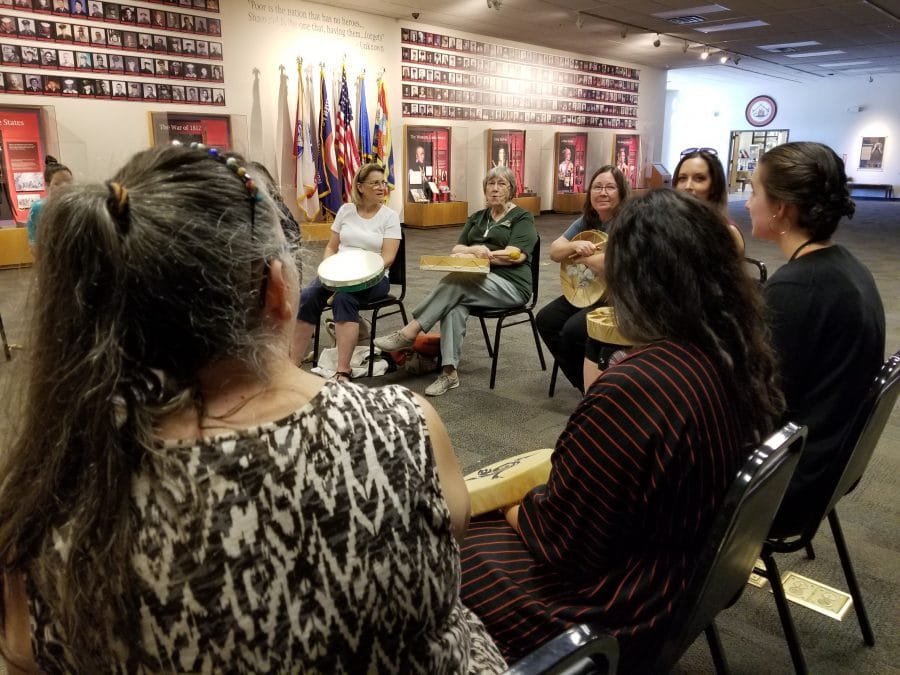 When people think of Native American drumming, a picture of men sitting around a large drum 2 to 3 feet in diameter often comes to mind. Tradition allows only men to play these drums, whether it’s at a powwow, ceremony or social gathering. However, tradition encourages women to play smaller hand drums, roughly a foot in diameter or less, either on their own or with the men. Every week, several Citizen Potawatomi Nation women gather to practice.

Nishnabé people considered drumming the heartbeat of Segmekwé, or Mother Earth. As one of the founders of the Tribal women’s drum group, De’wegen Kwek, Jayne Fleischfresser senses that connection through the music and language.

“When you’re drumming, you can feel that heartbeat. And it just kind of — I don’t know if transcend would be the right word — but it just puts you in a good state,” she said.

Nearly a decade ago, the group started as a talking circle, a safe space where participants speak for themselves, uninterrupted as turns move clockwise from person to person. Some of the members felt hesitant about speaking the language and learning traditional songs when they decided to add another activity to their time.

“It was kind of a little intimidating because it’s stuff you don’t know about, and then you’re not sure about pronouncing some of the words. But then just over time, we got past that,” Fleischfresser said. “But my sister Czarina, she’ll find songs for us to do, and then we’ll work on them for a while until we get them down. And then if we’re lucky enough to perform them, then we’ll perform them.”

During a recent practice, the members ranged from founders like Fleischfresser to those who started drumming less than two weeks before. Tribal member Pam Vrooman already felt a sense of community despite it being her second practice.

“Women are very connected, and I think we bring that connection into the drumming. It’s a different sort of drumming than the men do,” she said. “And I like the fellowship; I like the learning. There are stories swapped, and little nuances of things that you didn’t know before that you are suddenly a part of. And that’s a pretty incredible feeling.”

Donna Bernard began attending practice five years ago after she happened to see a Facebook post about it. She thinks De’wegen Kwek’s existence makes it unique.

“There are a lot of tribes that don’t have a women’s drum group, and if you go to any powwows or events, a lot of times you’ll see the big drum, and you don’t always know that there might be some drummers that drum on the small drums,” Bernard said. “I can tell that all the people in our group really enjoy what they’re doing, and it gives us a real sense of pride in our Potawatomi heritage.”

As the women sat in a circle at practice, they talked about their drums and rattles. Many of the women made their own as they became more comfortable playing.

Bernard creates one-of-a-kind drums at different events such as the annual Potawatomi Gathering, including one with a turtle. Native Americans often refer to North America as Turtle Island, named so in the Nishnabé people’s flood story. Above the picture, she painted “Bodewadmi,” the traditional spelling of Potawatomi.

“I have three (hand drums) now. Since I am an artist, I enjoy painting them also,” Bernard said. “So, we decorate them with Native designs. I painted two with eagles on them, more of a silhouette. And then I painted some feathers on a couple more.”

Over the years, many institutions and organizations have asked De’wegen Kwek to perform at functions and ceremonies. That includes the Hard Rock Hotel and Casino in Tulsa and several educational facilities. However, Fleischfresser holds time with the CPN Veterans Organization in particular close to her heart.

“When the veterans do their Christmas party, they always ask us to sing. And now, we feel like a part of their family,” she said. “And they’ll feed us and they include us and everything. Very honored to be a part of that.”

The women play both social and ceremonial songs at events, whichever is appropriate. As a new member, Vrooman already looks forward to passing on what she learns at practice.

“The other day, I was sitting in a restaurant with my granddaughter who’s 4. And I’ve been playing a lot of the drum songs in my car as we travel and exposing them to her. And she was singing the Humble Song. And I loved that, it just did crazy things to my heart,” Vrooman said. “I love the idea that that’s going to be part of who she is growing up.”

Fleischfresser learned about Potawatomi culture as an adult. However, she wishes she could have been connected during her youth. She appreciates the bond the women have now and said they laugh and cry together.

“We’re just like a little family. And sometimes we don’t always see each other but once a week. So, we’ll practice, but a lot of times, sometimes we’ll see what everybody’s been up to for the week and then get caught up on that,” she said. “We take ourselves serious, but no so serious that we can’t have a good time.”

Bernard finds practice fun as well. She describes herself as “not a musician” but continues playing. She doesn’t think apprehensions should stop anyone else either.

“It’s not so difficult that you can’t learn a song in even the first session. Try it out, and you’ll probably like it,” she said.

De’wegen Kwek meets Thursdays at 5 p.m. at the CPN Cultural Heritage Center. They invite anyone who wishes to drum or sit in on a session to attend. Extra drums and rattles are available to borrow for practice.