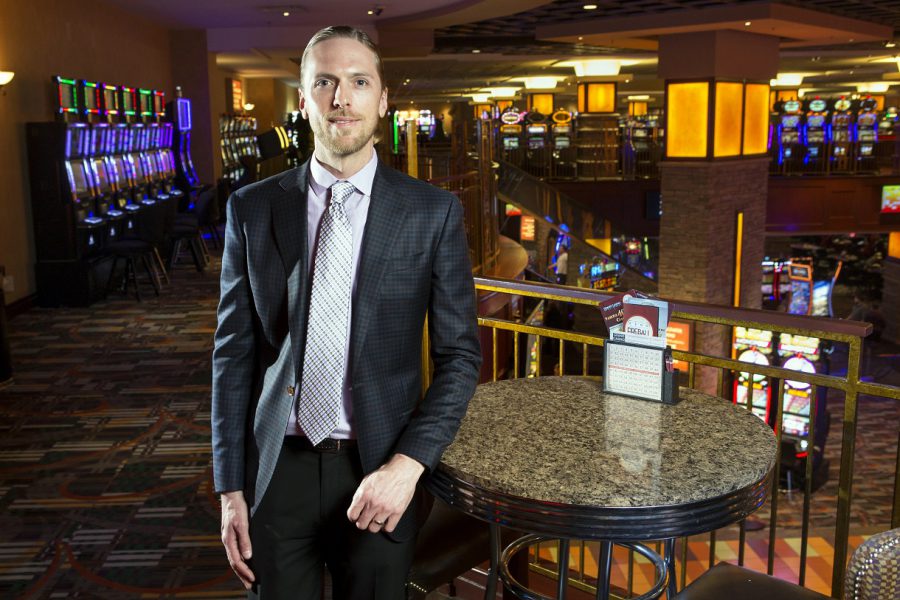 Todd Brand’s first job experience with Citizen Potawatomi Nation was as an 18-year-old teenager in 1998.

He worked at the bowling alley for about half a year before moving to Texas for college. He graduated from Baylor University in 2006, where he majored in geography with an emphasis on geographic information systems.

In the last year, he helped implement a strategic plan that included a sweeping reconfiguration of the casino’s gaming floors.

As director, Brand said his purview includes slot machines and table games such as poker.

His department also lends direction on some personnel and client issues, as well as helping managers understand how their department’s expenses fit into the casino’s overall budget.

First, staff pulled up around 6,800 square yards of old carpeting and cleaned the floors before laying new carpeting. Electricians also installed about 100 power banks into the floors and covered older ones in preparation for sweeping game reconfigurations.

“All the departments helped and worked through the disruptions that were necessary to get all of the infrastructure and carpet changes made,” he said. “It’s important to thank and recognize all of the employees for their hard work over the past year.”

He calls the new concept “door to core.” The layout creates clear sightlines by moving taller games to the perimeter. Game groupings are modular, and carpeted pathways, which Brand called “racetracks,” allow guests a more retail-like experience. In other words, they can easily browse for games that interest them.

The concept breaks from old-school casino floor design, which can be labyrinthian, forcing guests to wander through the venue without clear direction. They are unable to see over taller games, and it creates a cavernous, somewhat confining ambiance.

Benefits of the recent changes were immediately noticeable, Brand said.

For example, the handicap doorway area became more open and inviting — games moved farther back from the doors, creating a more foyer-like entrance. Modular, symmetrical game placement, a clear view into the center of the casino and wider, newly recarpeted walkways and floors drew more guests further into the venue.

“Before, everyone just sort of stopped at the entrance,” Brand said. “Everyone congregated around the first games they came to. Now they have much more mobility all over the casino.”

It’s also a little brighter inside now, too. It isn’t daylight-bright by any means, but the design elements, including elegant, art deco-style high ceilings and sweeping balcony views from the second floor, are now more prominent.

The casino has 20 table games, including blackjack, craps and spinnette. There are 1,750 slot machines, and 70 of those are wide-area progressive, or WAP. Each WAP is part of a larger network, so players in multiple venue locations contribute to jackpots, which means payouts can be higher. However, that also means someone in Las Vegas instead of Shawnee might win it, for example.

Brand said he also focuses on conversions, maximizing entertainment by bringing in new machines and removing older ones, he said. The casino bought 16 games in December with more planned.

His data analytics experience as an IT employee for the casino also helps, he said. The most-played games stay.

From calendar year 2016 to 2017, the venture’s gross revenue increased 2.6 percent, Brand said. That’s impressive, he explained, because a 1 percent increase is more typical in recent years, even in places like Las Vegas. Gaming comprises 80 percent of Grand Casino’s gross revenue.

“Every day, I look at ways to be more efficient,” he said. Slot, table and poker revenues are examined daily, including weekends.