War of 1812 and the bloody Battle of Fort Dearborn 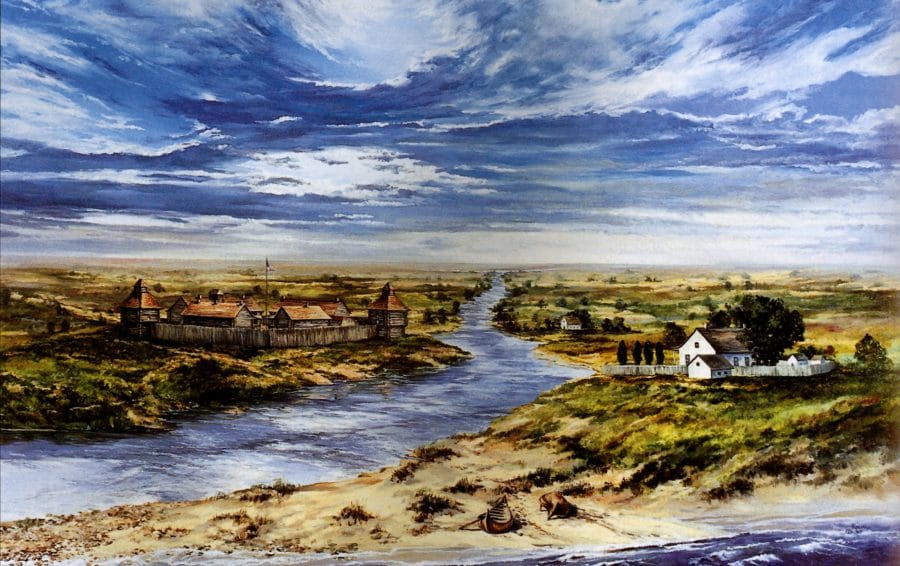 At the confluence of the Chicago River and Lake Michigan once sat Fort Dearborn, where a bloody battle between the Potawatomi and federal troops occurred on Aug. 15, 1812. This year marks the 207th anniversary of the Battle of Fort Dearborn, once referred to as the Fort Dearborn Massacre.

The U.S. obtained the land to build the fort from the Potawatomi through the 1795 Treaty of Greenville. The fort’s construction began in 1803 and finished in 1804 under the direction of U.S. Captain John Whistler. From 1804 to 1812, the fort — named in honor of the U.S. Secretary of War Henry Dearborn — served as a key U.S. post in an undeveloped, remote area of the country.

White settlers’ movement into the Great Lakes region and hostility between Great Britain and the U.S. continued, even after the Revolutionary War ended and the Northwest Ordinance passed. Many Natives did everything in their power to hold onto their ancestral lands and traditions. The Battle of Fort Dearborn exemplifies the chaos surrounding Indian policy at this time and the response communities can take after exhausting all other apparent avenues.

After the founding of the United States, some Native groups desired to accommodate the Americans and adapted aspects of colonialism while others promoted traditionalism and encouraged abandoning non-Native practices and ideals entirely. The two varied responses created a divide within the Potawatomi and other Native American tribes. Each desired to find solutions to the mounting issues Native Americans faced. Some fostered relationships with the American settlers to develop and maintain profitable trade while others followed the teachings of Tecumseh and his brother Tenskwatawa (The Prophet).

Those with even limited knowledge surrounding the War of 1812 often are familiar with Tecumseh and his reputation; however, his brother Tenskwatawa also held great influence within Native communities at this time.

“The muscle behind the movement was divine intervention and inspiration. The medicine people were who the masses had always listened to above others,” said Citizen Potawatomi Nation Cultural Heritage Center Curator Blake Norton. “This does not diminish Tecumseh’s role, but his prowess was on the battlefield, not politics.”

The brothers’ platform caught the attention of Potawatomi Chief Main Poc. In October 1807, he traveled to Greenville where he spent nearly two months speaking with Tenskwatawa.

In an article titled Main Poc: Potawatomi Wabeno, David Edmunds wrote, “At first many Indians regarded Tenskwatawa, the Shawnee Prophet, as a charlatan, but when he successfully predicted an eclipse of the sun in June 1806, even many of the former scoffers were converted. Main Poc probably learned of the rapidly spreading new religion from the Kickapoos, who were among the Prophet’s first disciples.”

The Potawatomi Wabeno (powerful medicine man) encouraged the Shawnee leaders to develop their hub, known as Prophetstown, near his village in northwestern Indiana.

“Main Poc played a crucial and leading role during this period,” Norton said. “He was a renowned spiritualist and very proud of this. His initial interest was in Tenskwatawa. He wanted to know if this Shawnee prophet who was gaining notoriety was legitimate. Tenskwatawa’s feelings were mutual. Main Poc was also a famous warrior, with a near cultish following. This allowed him to build a strong relationship with both brothers, ultimately leading to their relocation from Ohio to Indiana.”

Without Main Poc’s military support, the message of Tecumseh and Tenskwatawa may not have caught the traction that it did. American Indian agent William Wells considered Main Poc as the “greatest warrior in the west … the pivot on which the minds of all Western Indians turned … (he) has more influence than any other Indian.”

Norton added, “Comments like that put (Main Poc) neck to neck with Tenskwatawa and Tecumseh, in my opinion. This motivated officials to personally invite him to meet directly with Thomas Jefferson. In many ways, he embodied the balanced spiritual/military movement of Nativism.”

On Nov. 5, 1808, agent Wells, Main Poc and others began traveling to Washington D.C. Although Wells hoped the trip would help settle the Potawatomi and other Native group’s disdain for the government, Main Poc continued to dislike the United States.

In Main Poc: Potawatomi Wabeno, Edmonds wrote, “During the Christmas holidays he met personally with President Thomas Jefferson. Clad entirely in buckskin, his face painted in broad swatches of red and black.” Main Poc refused to participate in activities alongside the rest of his companions, staying in his apartment. When the delegation held a private meeting with President Jefferson, Main Poc refused the President’s suggestion that the Potawatomi should become farmers.

After returning to the Great Lakes region, Main Poc continued building a relationship with the Shawnee brothers. However, he refused to adhere to all of their policies, especially surrounding peace with other Native tribes. He kept leading raids against other tribal groups, and in 1811, Main Poc received a wound during a skirmish with an Osage hunting party. He spent the spring of 1811 healing, and once able, he traveled across Potawatomi, Sac and Kickapoo villages to help prepare them for battle.

Tecumseh desired all Native Nations possess what little Indian land remained in common, with no tribe or community holding sole ownership. Federal policy at this time encouraged small groups and leaders to cede land, and as a result, large acreage quickly passed from Native Americans to white settlers’ hands. Tecumseh and many others believed these treaties should not be upheld, and to ensure no more lands transferred in this manner, all Natives would have to ban together.

Edmunds continued, “The Shawnee chief realized that in the past the traditional tribal political structure had proven ineffective. Because the tribes had acted independently, federal officials had been able to manipulate them, often playing one against the other to the government’s advantage.”

The fort provided an opportunity to control the Straits of Mackinac, which served as a key access point to Lake Michigan from Lake Huron. Because water travel was faster than on land at this time, the win gave British and Native forces an upper hand.

After the U.S. lost Fort Mackinac, Captain Nathan Heald at Fort Dearborn received an order to evacuate and destroy all ammunition and arms while giving any remaining goods and provisions to friendly Native Americans in the area. The two forts stood approximately 300 miles apart, and the U.S. military feared they would not be able to provide Fort Dearborn with adequate supplies without Fort Mackinac. Potawatomi leader Winamek delivered orders from General William Hull, the initial governor of Michigan Territory, for the Americans to leave their post immediately before any Natives in the area learned about their plans to leave Fort Dearborn. However, Captain Heald ignored his advice.

On Aug. 14, 1812, Captain Heald called a council meeting with the Potawatomi, informing them of his plans.

“To their surprise, he told them he intended to evacuate the fort the next day, August 15, 1812; that he would distribute the fire-arms, ammunition, provisions, whiskey, etc., among them; and that if they would send a band of Pottawatomies to escort them safely to Fort Wayne, he would there pay them a large sum of money,” explained Potawatomi Chief Simon Pokagon in an article titled The Massacre of Fort Dearborn at Chicago published in 1899.

By going back on his word, many Potawatomi no longer trusted Captain Heald, and it helped fuel their desires to reclaim the area as their own. On the evening of Aug. 14, Potawatomi leader Black Partridge met with Heald and gave him his peace medal. He warned the Americans to be careful when they began their journey the next morning and that he could not hold his men responsible.

Stationed at nearby Fort Wayne, Indian agent and U.S. military Captain William Wells gathered 30 Miami warriors to help escort the Americans residing at Dearborn back to Fort Wayne. On the morning of Aug. 15, Fort Dearborn’s 96 inhabitants began their journey. A little more than a mile into the trip, 500 Potawatomi warriors under the direction of Blackbird and Mad Sturgeon, along with a few Kickapoos, Sacs and Winnebagos, took shelter behind dunes on Lake Michigan’s shore. As Native warriors primed their weapons and waited for an opportunity to attack the Americans, Captain Wells saw them in the distance and warned Captain Heald of the impeding ambush.

Blackbird then instructed his men to attack, and the Potawatomi crossed the dunes to approach the Americans. Heald’s troops attempted to strike the Potawatomi center, but it provided an additional opportunity for the Native warriors to circle the American column. Heald and his men tried to protect themselves with the dunes, but other Potawatomi fired upon the soldiers. About 15 minutes later, the two sides ceased fire.

In The Potawatomis Keepers of the Fire by R. David Edmunds, he wrote, “The Potawatomi attack took a heavy toll on the Americans. Heald’s force suffered fifty-three dead and many wounded. Among the dead was Wells, shot from his horse and then riddled by musket balls as he lay on the beach. The Potawatomis lost about fifteen warriors. Among the wounded was Mad Sturgeon, who suffered a gunshot wound.”

After the battle and the incineration of the fort, very few, if any, U.S. citizens called the region home until the War of 1812 ended. However, because of the political and cultural climate across the United States at the time, the battle was commonly referred to as a massacre for many years, although it occurred during war. The choice of language helped relay a message and rally Americans together against their Native counterparts, and shortly after the Battle of Fort Dearborn, many Native villages experienced attacks by white settlers and U.S. troops. The word “massacre” plays into the idea that Native Americans were and still are nothing more than uncivilized barbarians, which is far from the truth.

According to Chief Simon Pokagon’s 1899 article, “The Fort Dearborn battle has been denounced by the dominant race as a brutal massacre, regardless of its many individual acts of mercy and kindness. In this wholesale slaughter, not one white man stretched out a hand to save a single soul.

“Your own historians, true to their trust, have recorded the cruelty of their own race, that unborn millions might read it as a testimony against them. In the name of all that is sacred and dear to mankind, tell Pokagon, if you can, why less love, pity, or sympathy should be required of the civilized and enlightened people than of untutored savages.”

Learn more about this era in Potawatomi history and the Battle of Fort Dearborn by visiting the Cultural Heritage Center’s gallery Defenders of the Northwest: Ndobani.