Vols fall to Georgia, Lose Tyler Bray for 4 to 6 weeks 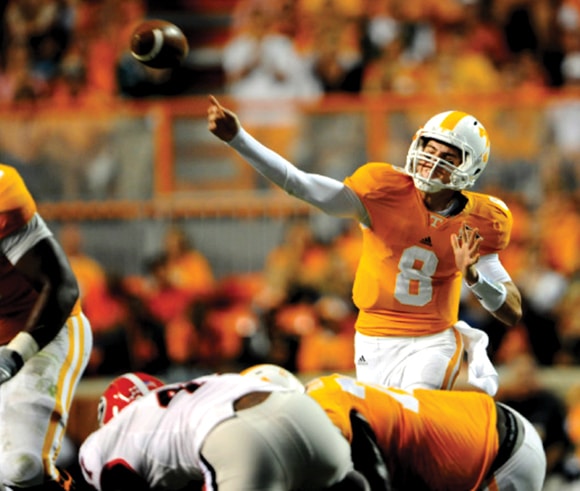 (CPN member Tyler Bray fires a pass downfield against the Georgia Bulldogs. Hitting his throwing hand on a Bulldog’s helmet late in the game, Bray broke his thumb and will miss four to six weeks of action.)

KNOXVILLE, Tennessee – For much of the season, Tennessee coach Derek Dooley bemoaned his team’s tendency to give up one or two costly plays. Unfortunately for the Vols, that trend continued in a 20-12 loss to Georgia in front of 102,455 fans in Neyland Stadium on Saturday, October 8.

Possibly of more importance, the Volunteers lost quarterback Tyler Bray, a Citizen Potawatomi Nation member, for four to six weeks because of a fractured thumb. Bray, who finished with 251 yards on 18-of-33 passing, left the game with about 4 1/2 minutes remaining after his throwing hand slammed into a Georgia defender’s helmet.

At this point in the season, with his team at 3-and-2 overall and 0-2 in the Southeastern Conference, Bray has excellent passing statistics: He has completed 65.9 percent of his passes (116-of-176), with 14 touchdowns and just two interceptions. His passing has gained 1579 yards -315.8 yards per game- for the Vols.

After finishing the first half tied with Georgia at 6-6, the Vols surrendered 14 unanswered points in the third quarter and couldn’t catch up. One big play in particular -a 73-yard pass to Georgia’s freshman receiver Malcolm Mitchell- proved costly. Backed up at his 7-yard line, Georgia quarterback Aaron Murray hit Mitchell on a play-action pass that took the Bulldogs to the UT 22 and flipped the field in a major way.

“That’s a huge play. Everything changed after that,” Dooley said. “Then we really got affected. Then we gave up a 17-yard run. That was the longest run of the day. That was big. Then it got hard.”

With Bray on the bench, backup  Matt Simms  took over and scored on a one-yard touchdown run to finish off a 14-play, 76-yard drive that made the score 20-12. Michael Palardy’s extra point was blocked, and the ensuing onside kick attempt went out of bounds, effectively ending Tennessee’s chances.

As difficult as the Vols had it at times against Georgia, it won’t get any easier. On Saturday, October 15, UT hosts #1 LSU, which defeated Florida 34-11 on October 8, in Neyland Stadium before traveling to face #2 Alabama on October 22. “We’ve got one and two coming in,” Dooley said. “Nobody’s going to feel sorry for Tennessee.”

Vols tight end Mychal Rivera wants to make sure Tennessee doesn’t spend too much time feeling sorry for itself, either. “We’ve just got to keep pushing forward. We’ve got a big week ahead,” he said. “We’ve got a shot to take down #1. That’s what I’m looking forward to.”