Visual storytelling at the heart of Doug Brown’s career 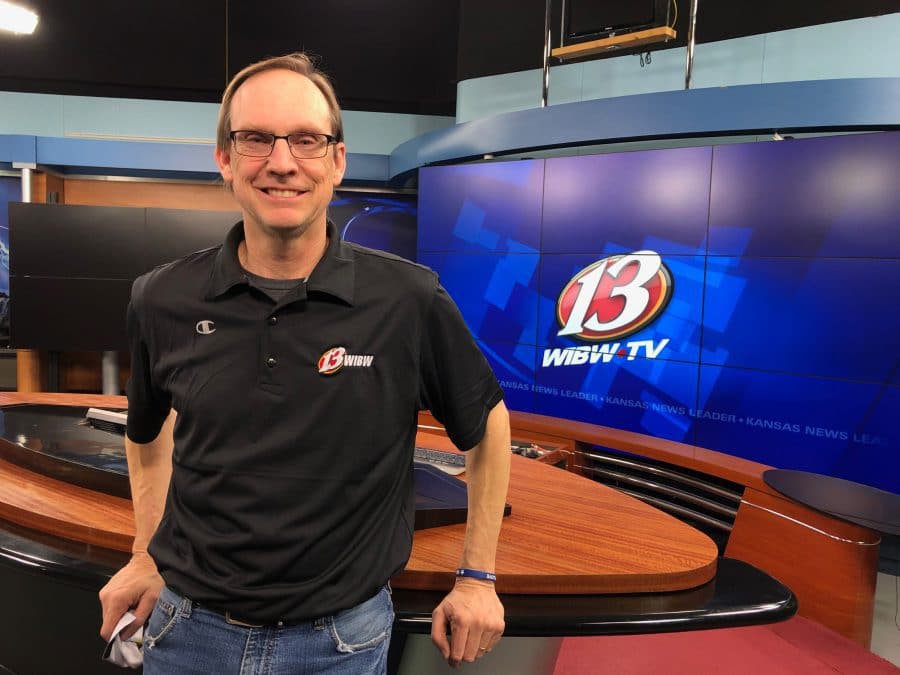 Joseph Bourassa descendant Doug Brown began capturing news around Topeka, Kansas, 27 years ago as a photographer at WIBW channel 13. Since then, he has risen to the ranks of WIBW’s chief photographer.

“I cover everything from car wrecks to kids having fun with play days at their school, and that’s the great thing about my job — everyday, it’s something different,” Brown said. “You never know what’s going to be on your plate.”

His interest in the art form began as a child on a rodeo trip to Iowa.

“They had a garage sale right next to the rodeo grounds, and somebody had an old film camera. It had a projector, a screen, everything,” Brown said. “I brought it home with me, and I got to playing around with it and found it really interesting.”

He grew up on a farm near Grantville, Kansas, and like many across the state, basketball became one of his key interests in school. However, his curiosity for film and photography returned when Brown’s brother began working at a local radio station. Visits there inspired Brown to study mass communications at Washburn University, but he did not neglect his love for the game. He finalized his decision to attend the institution as a basketball player after the Washburn University boys team won the NAIA National Basketball Championship in 1987. Upon graduation, he began his career at WIBW.

Brown’s camera skills have allowed him to expand beyond his rural upbringing. Every March, he travels to the NCAA basketball tournaments and receives other assignments to cover events and people across the U.S. and abroad.

“Growing up in the little town and on the farm, I hadn’t done much traveling at all,” he said. “It’s so great to actually go out and experience these different parts of the country.”

Brown’s wife Melissa Brunner also works at WIBW as a nightly anchor. Although the couple works separate shifts, they often go on assignments as a team.

“There are several hours in the day that we work together, and between the evening shows, she’ll make dinner at home and then bring it in … we try to take 10 minutes to eat dinner together,” Brown said.

When given the chance, the couple enjoys working on uplifting feature stories the most.

“I think they are more memorable, too,” he said. “There is so much crime and violence in the world, so when you have a good feature story where people can sit back and smile and enjoy it — I think that’s something that sticks with me more so than the other types of stories.”

Outside of WIBW, they enjoy spending time with their cats and dog Buddy, as well as catching up on their favorite TV shows. Although working in the news industry prohibits Brown from attending most Potawatomi events, he keeps connected by reading the monthly Hownikan and mails his ballot to vote on Tribal elections and budget every summer. During the 2018 Potawatomi Gathering held at the Prairie Band Potawatomi Nation, Brown reported on CPN leaders and members touring Citizen Potawatomi historical sites around Topeka. Watch the feature at cpn.news/topekatours.

In 2015, Brunner and Brown traveled to Guam with the Kansas Air National Guard’s 190th Air Refueling Wing. The unit is stationed at Forbes Field Air National Guard Base in Topeka and assists with in-flight refueling of military planes, often on the other side of the globe.

“It was just eye opening to see everything that this group did,” Brown said. “I see the big planes fly over the station every day, but I have a lot better understanding of what they do now.”

Brown had never traveled to the western Pacific Ocean before this assignment, and he enjoyed the opportunity to experience it with this wife. Watch their segment on the 190th Air Refueling Wing here, cpn.news/190thguam.

Since his start, the news industry has changed dramatically, including technologically and the way he connects with WIBW’s audience.

“As far as getting to interact with the community, the biggest change has been social media,” Brown said. “I get people sending me messages, tips for news stories, or just saying, ‘How are you doing today?’ It gives a whole other way to interact with people.”

WIBW recently celebrated 65 years on the air, which inspired the station to look back on the changes that have occurred throughout the decades.

“For the past 12 months, I have worked on archiving really old videotapes and film, transferring them and digitizing them. And then we did stories, tracking down some of these people,” he said.

The station released the throwbacks and updated interviews through its 13 at 65 segments, giving Brown the chance to look back on some of his early work and reminisce.

Brown believes in the importance of helping young up-and-comers hone their craft by passing on tips and tricks he learned through nearly three decades of experience in the industry.

“Being a small station, we are the first job out of college for a lot of people,” he said. “So, I’ve just kind of taken on the role to make sure that they’re understanding everything they need to and giving them all the help I can because most of them want to move on and go on to larger markets or back to their hometowns.”

As he gets closer to retirement, Brown hopes to have the opportunity to be more involved with the Nation. For now, he continues to focus on uncovering compelling stories and the people behind them across the Topeka metropolitan area.