AARP celebrated 50 elders representing the state’s 39 tribal nations at its ninth annual awards, presented Oct. 3 at the National Cowboy and Western Heritage Museum in Oklahoma City. Medallions were presented in recognition of their lifetime of contributions to their communities, families, Citizen Potawatomi Nation, tribes and the United States.

“This year’s AARP Oklahoma Indian Elder Honorees represent what is best about Native American people: love of family, dedication to culture and respect for all people,” said AARP state director Sean Voskuhl in a media statement.

The evening began with dinner, a performance by the Oklahoma Fancy Dancers and an invocation/Osage prayer and blessing by Steven Pratt. John Hamilton led an “In Memorium” observance. Voskuhl acted as master of ceremonies and Eric Schneidewind, AARP national president, welcomed the 2017 class of Indian Elder honorees.

Growing up, Barrett didn’t know much about his tribal heritage. Few others seemed to know about theirs, either.

“Being Potawatomi in the 1960s, we didn’t know who else was Potawatomi. You knew none of them.” People didn’t talk about their tribal affiliation during the mid-20th century in Tecumseh, Oklahoma, he said. “I would give anything to go back in time and talk to my grandmother and encourage her to open up and share our family history.”

He knew he was a descendant of the Boursaw family, but, at the time information on Citizen Potawatomi Nation wasn’t organized and accessible like it is today.

Under the leadership of Citizen Potawatomi Nation Tribal Chairman John “Rocky” Barrett and Vice-Chairman Linda Capps, he said he’s proud that he’s been able to help change that. The District 10 Legislator said he works to ensure the Nation’s future remains strong, while incorporating and preserving the knowledge and lessons of its past.

He graduated from Tecumseh High School in 1966, and then attended Murray State Junior College before transferring to the University of Oklahoma and earning his bachelor’s degree in accounting.

From there, he enlisted in the U.S. Navy, serving as an electric radar technician on the USS Durham (LKA-114), a landing craft and attack cargo ship. During his enlistment, Barrett stopped in Hong Kong; Da Nang, Vietnam; Sydney, Australia; the Philippines and Japan during the Vietnam War. He said he is proud to have served his country.

He paused and smiled as he shared a memory. While at sea, he would load himself into a small boat — with a 50-pound VRC-46 mobile radio strapped to his back — and meet a Navy vessel to climb aboard and fix its radar before making the trip back to the USS Durham.

“I knew what I had to do, so I did it. I didn’t even think about it,” Barrett said. “I couldn’t swim; I couldn’t even tread water. I still can’t. If anything happened, it wouldn’t have mattered anyway!”

He also realized that, while in the Army, he had formed special bonds with other Native servicemen and women. “I have a very happy heart — a proud heart,” he said.

He married his wife Connie in 1971 and lived in San Diego until 1982, when they moved to Bethel Acres, Oklahoma, and started a family. He researched his ancestry — what he could find of it. He also worked as a financial controller for companies like Worthington Pump Corporation while earning a master’s degree from Oklahoma City University. He also became an entrepreneur, helping start Windsor Door Company and investing in stocks, rental properties and more.

He also met CPN Chairman “Rocky” Barrett and Vice-Chairman Linda Capps in 2002, whom he calls “visionary leaders who wisely used what seed corn the Tribe had to grow our enterprises.”

He joined the CPN Legislature in 2008 after serving on several boards and helping lead the Nation’s Grievance Committee.

“We only started recognizing each other — our community, our families, our heritage — in the last 40 years,” he said. “We started coalescing around our history and building prudent investments toward our future — looking down the road and bringing everyone together to protect the benefits for future generations.”

His sense of humor — and his diligence — is apparent today as he helps lead Citizen Potawatomi Nation’s District 10. He’s also treasurer of CPN’s Veteran Organization and participates in its Color Guard.

“I’m only 69, and here I am receiving an AARP Indian Elder Award,” Barrett said, then laughed. “I still seek wisdom from elders — conversations and history and knowledge. … This award is a true honor.

“Really, I consider myself a stickler,” Barrett said of his public service. “I’m persistent in asking questions. I have a tenacity I maintain to understand facts, the reasoning behind resolutions and bills, and being able to share that knowledge and understanding with family — Citizen Potawatomi Nation members. I want facts and truth. If I have it then I can share it; that’s what people will learn.”

He paused, then smiled broadly. “You know I couldn’t have done any of this without my wife, right?” 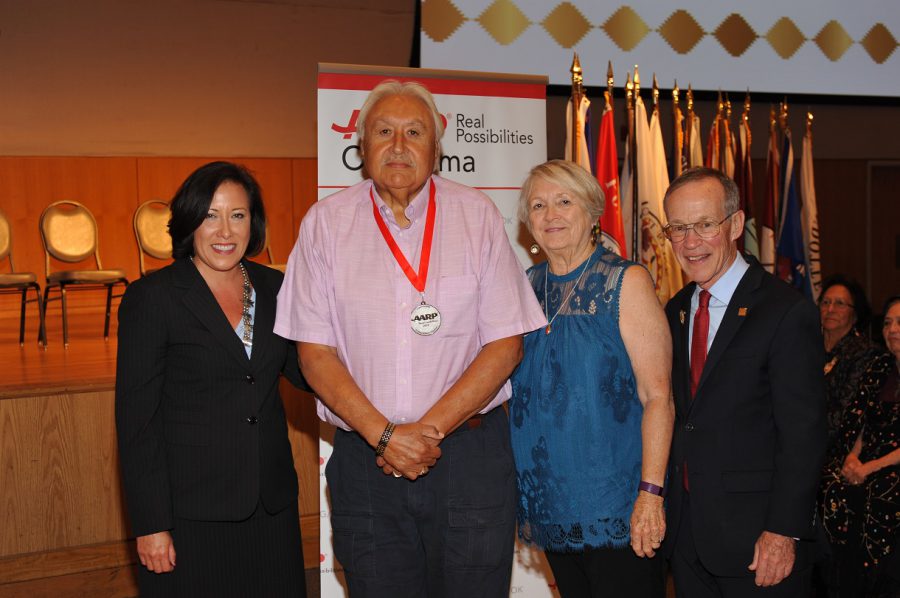 Patadal “wanted to be more than a counselor,” he told the Hownikan. “I wanted to go to where the heart is.” And the heart of his passion lies within the hundreds of Indigenous people he helps make the transition from incarceration to freedom.

“The most satisfying thing about what I do is helping my people,” Patadal said. He also leads community sweat lodges and talking circles for the community and CPN tribal members.

Patadal, who attended Indian boarding schools as a child, participated in spiritual sweat lodges as a kid, before the American Indian Religious Freedom Act became law in 1978.

“I remember the FBI would sit across the way and watch us,” he said. “That was before our freedom of religion act. … Sometimes, we’d take them coffee.”

Those experiences influenced the trajectory of his life.

In the mid-’90s, before joining CPN, Patadal even participated in a prison sweat lodge with high-profile American Indian Movement Indigenous rights activist Leonard Peltier. Peltier was sentenced to two consecutive life terms in 1977 after being convicted of killing two FBI agents during a 1975 armed confrontation that became known as the Pine Ridge Shootout at Pine Ridge Indian Reservation in South Dakota, near Wounded Knee.

His focus shifted back to spirituality about 25 years ago, “when I straightened up,” he said, then chuckled. That’s when Patadal found sobriety. His father, who was dying, also urged his son, “You have to help people.”

“When I straightened up, I straightened up for good,” Patadal said. “I have to talk right and act right; I don’t have to protest or march — I can stay right here and help my brothers and sisters.”