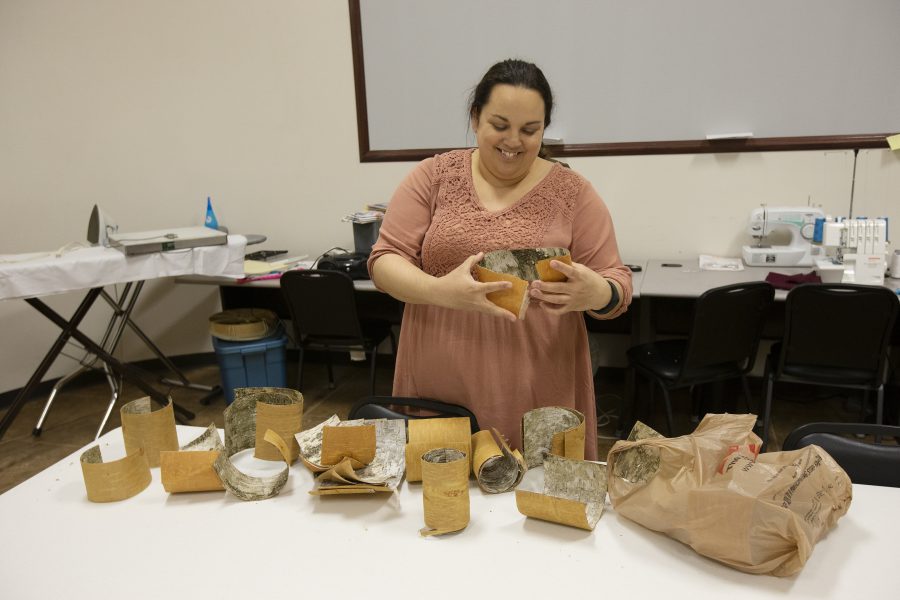 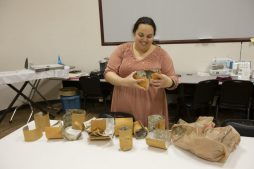 Kristy Phillips tests the flexibility of the birchbark she peeled during the winter in Michigan.

Tribal member Kristy Phillips resolutely carries on Potawatomi traditions. She began learning the Tribe’s language as a child in the small town of Maud, Oklahoma. After graduating with a Bachelor of Science in cellular and molecular biology in 2006, she switched jobs from the CPN Language Department to the medical field until an opportunity teaching Potawatomi at Hannahville Indian School came open in 2011.

“I dropped my career as a lab tech. I was going to go into becoming a doctor,” Phillips said. “I dropped everything to make sure that I can do something for the language and for the people.”

She accepted the position and moved her family north from Oklahoma to Wilson, Michigan. After living there for several years, a friend began teaching her how to peel birchbark trees, which thrive in the Great Lakes’ climate and conditions. Potawatomi use the wood for both practical and artistic purposes, and those uses often overlap. For example a watertight basket can carry maple sap used to make syrup, a longtime Nishnabe custom.

Phillips has peeled trees in the winter over the last few years. Harvesting bark during the colder months is more difficult than in the summer. The heat and humidity give the wood flexibility, and it “just pops right off” in larger pieces, Phillips said. Winter birchbark’s hardness makes it ripe for etching, but ideal peeling conditions happen less frequently in the cold weather.

“You take a piece of a square off, and then if that square comes off easily, you’re then able to cut it and start,” she said. “It just takes a long time working with it, making sure that you do it cleanly and you don’t damage the piece that you’re trying to get.”

She stresses the importance of patience and practice. Finding a tree to collect from is as difficult as collecting itself, especially while respecting it as a living organism. Both take a long time to master.

Phillips learns more about the trees and the language from each other. She likes blending the two cultural staples. The Potawatomi word for birchbark is wigwas or “the essence of that being is being shown,” she said. She witnessed the deeper definition while walking in the forest.

Since Citizen Potawatomi originated in the Great Lakes region, Phillips feels her roots deepens in those moments. Peeling birchbark taught her how to listen to nature as her ancestors did. She believes she is carrying on an important tradition, both tangibly and conceptually.

“You’re actually understanding … the work that is behind taking those resources,” she said. “I think it really does come down to understanding what we’re taking and knowing where it comes from.”

As a language teacher, she knows educating Tribal youth about Potawatomi culture increases its endurance. She makes a persistent effort to give children the knowledge and opportunity to make a connection to the earth too.

“I think all of our children should start understanding the resources and the land because that will give you an appreciation for it,” she said. “It will make you want to take care of the resources that we have and have a better love for that.”