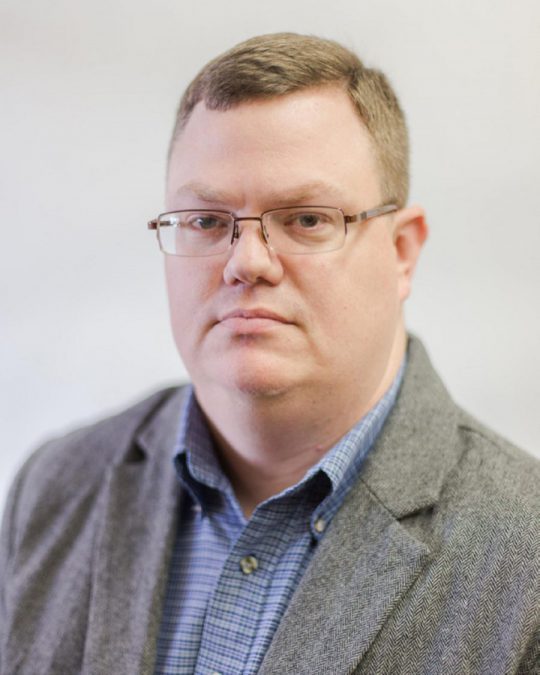 Given the nature of the world today, where governments, businesses and average consumers are under threat from cybertheft and hacking, Citizen Potawatomi Nation’s information technology department plays a vital role in security for the tribe, its people and its customers. One longtime department employee and tribal member, Christopher Abel, has climbed the ladder at CPN while helping build its IT infrastructure.

Born in Shawnee, Oklahoma at the old Mission Hill Hospital, which sits amid tribal headquarters and today’s FireLake complex, Abel is a member of the Bourbonnais family.

His family roots are deep in Pottawatomie County, with his great grandfather, grandfather and father all serving in law enforcement. His father was a longtime officer for the City of Tecumseh, and he continues his law enforcement career as chief of police in the nearby town of Meeker.

Like many who grew up in and around the tribal headquarters at Gordon Cooper Drive and Hardesty Road, Abel saw from a young age the tribe’s development as a commercial entity and service provider. His grandmother and Citizen Potawatomi member Joyce Abel was the director of CPN Health Clinic and helped establish the Health Aids Program.

“I got to see the plans for the current clinic, the wellness center, as a kid growing up,” Abel said. “I can remember walking into her office and seeing the plans up there on her wall.”

Given his grandmother’s close association with the tribe, which had a significantly fewer employees compared to today’s estimated 2,400, Abel also heard about the tribe’s inner workings.

“Even when I started here I was getting introduced to people who I already knew who they were,” he said. “I got to see a lot of it (CPN) build up over the years. I remember when the grocery store wasn’t here, and when the bowling center was the entertainment center. I spent a lot of time over there playing pool as a kid.”

He attended elementary school in Macomb and middle school in Tecumseh before graduating from Tecumseh High School in 2000. Abel admitted that, at that time, he did not know what he wanted to do with his life. He attended Oklahoma State University in Stillwater for a time before returning to Shawnee.

Back in Pottawatomie County and still without a plan, Abel reached out to the tribe to see what career and training options might be available. Workforce and Social Services, then called Employment and Training, offered a program called NAVTEP, which paid Native Americans to attend technology center classes at places like Gordon Cooper Technology Center and graduate with course certification.

“I was actually a chemical engineering major and a music education major for a while in college,” he said, then laughed. “But I’d had a computer since I graduated high school, taking them apart, putting them together to see how they worked, and they were something I was just interested in. It fit.”

Abel earned $5.15 an hour to attend a computer repair and advanced networking course, giving him his first steps into the information technology sector.

Just months prior to completing the course in 2005, Abel learned about a tech support job opening in CPN’s IT department. He interviewed, was made an offer and, upon the completion of his course, has worked for the tribe ever since. Like many longtime employees he heard his grandmother talk about at the dinner table when Abel was a kid, Abel has worked his way up to IT manager, where he supervised techs and the tribe’s server systems. In 2016, he was appointed its assistant director.

In that time, Abel made the decision to return to school and complete college. The opportunity came for him in part due to St. Gregory’s University’s CPN Tribal Development Scholarship Program, which allows Citizen Potawatomi to attend the school tuition-free.

“I am a lifelong learner, so I was always unhappy that I didn’t complete my degree. It was something I felt that I missed out on,” he said. “Another reason is I have three kids at home. My oldest is almost 15 and I want to make an impression on him to show that it is important to get a college degree.”

Abel said he returned to school, where he focused on business and improved himself for his work with the tribe. With various vendors selling ever-necessary upgrades in software and hardware, Abel expressed his desire to better serve the tribe by deepening his understanding of the commercial side of IT.

As he paused in his office at the CPN Administration building in Shawnee, Abel described with some humor his lack of passion for following in his father and grandfather’s footsteps as law enforcement officers.

Yet in some ways, given the threats faced by organizations from cyber criminals and hackers, the role Abel plays today is somewhat similar in nature; to protect the assets and people of Citizen Potawatomi Nation.