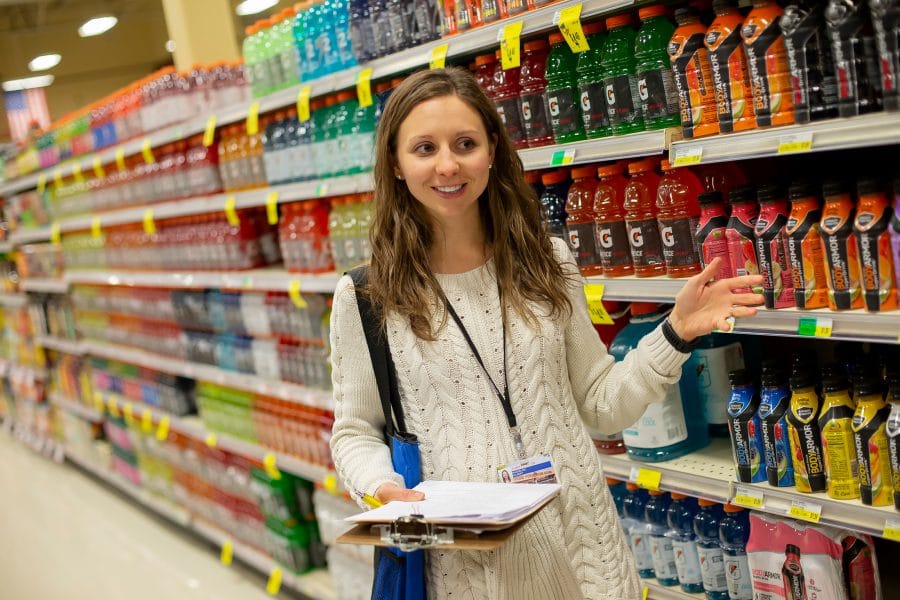 As a registered dietitian with Citizen Potawatomi Nation, Maggi Gilbert uses real world examples of facts and expectations to make an impression on patients. During a recent Hownikan interview, she held up a wide plastic tube filled with the average amount of sugar in a can of pop — nearly 10 teaspoons.

“I’ll use this a lot because this is just a 12 ounce soda, and that is the amount of sugar that we’re drinking. … That’s not providing our body with nutritional value, and that is an eye-opener sometimes. A lot of times,” she said.

After earning her bachelor’s degree in pre-allied health from Oklahoma Baptist University in Shawnee, Oklahoma, she transitioned to the University of Oklahoma Health Sciences Center in Oklahoma City and earned her Master of Arts in Dietetics. The program’s eight-month internship included clinical rotations at the OU Medical Center, a stint in hospital kitchen management and more.

Gilbert’s dad is a doctor, and she watched him provide patient care as she grew up. She wanted to shape her career in a similar way, but the specifics remained unclear as she began college.

“That was one of my biggest things was I wanted to be able to build relationships and help people throughout their journey,” she said.

She began modifying recipes and learning about nutrition the summer following her freshman year. Gilbert’s dad introduced her to dietetics as a career option, and she shadowed a dietitian at the OU Cystic Fibrosis Center that summer as well. She then declared her major at the beginning of her sophomore year.

Gilbert gained community experience during rotations at Mid-Del Public Schools and a local Women, Infants, and Children program. She also deepened her knowledge of diabetes dietetics while interning at OU Physicians Family Medicine.

For her elective rotation, Gilbert chose to work at Oklahoma Baptist Homes for Children, a residential care facility for single moms and their children.

“They don’t have a dietitian, so it was a little out of the box, but it was something that I was able to work more one-on-one with moms and their kids and teach them how to grocery shop and how to cook healthy meals,” she said. “And that’s where my passion for community really developed.”

Gilbert stumbled across the CPN job opening on Facebook, and the position brought together everything she practiced in the type of setting she enjoyed.

“I was like, ‘That’s me. That’s what I want to be doing,’” she said. “I applied for  the job, prayed about it, and felt like this was where the Lord was leading me. This was the job for me. And then (it) just kind of worked out from there.”

She finds patient care rewarding but also enjoys the other hands-on activities and teaching opportunities the job provides her. Gilbert started giving grocery store tours of FireLake Discount Foods in November, advising shoppers on how to shop in a healthy way while sustaining variety. She also leads a session of the Beginning Education about Diabetes class as well as cooking demos.

“The most exciting thing is when they love it. We did a breakfast tofu scramble one week, and some of them didn’t even know it was tofu,” she said. “They came in late that day and asked ‘Where’s the tofu? I didn’t try that?’ They thought it was egg.”

One of the main tools Gilbert uses during her appointments is MyPlate, a nutrition guide published by the U.S. Department of Agriculture Center for Nutrition Policy and Promotion. It shows the ideal portion size per meal of each of the five food groups on a dinner plate.

“I use MyPlate a lot with most of my patients,” she said. “I encourage them to include variety, trying to incorporate every food group.”

Gilbert works to eliminate her clients’ feelings of intimidation. Much of what she teaches them goes back to basics and includes reprioritization.

“Not that change is easy, but we talk about once we start to make changes consistently, then that can create a habit,” she said.

According to Gilbert, people oftentimes complicate achieving a well-rounded diet. They search for the newest, most popular methods, but those are often unrealistic.

“We talk about portion sizes, consuming foods in moderation, and foods we don’t need to consume quite as often as others,” she said.

In her experience, people overlook reading the nutrition label completely and instead focus on one aspect such as total fat, sugar content or sodium. She also teaches them about meal prepping and grocery shopping.

“If we plan our meals out and have a plan going into the week, then it’s a lot easier to not go out because we’ve got something at home,” she said. “We’ve already purchased it. We’ve spent that money.”

However, she accepts that people go out to eat, and Gilbert researches options and discusses restaurant nutrition facts with her clients as well.

In her personal life, Gilbert follows her own advice.

“I definitely am conscious of it and feel like, if I can’t practice what I’m teaching, then how can I expect my patients to do the same?”

She and her husband enjoy salads with fruits and nuts, soups and healthy breakfast adaptations. She often cooks with chickpeas, quinoa, beans, whole grains and frozen or fresh vegetables. Gilbert plans their week in meals as well. However, baking holds a special place in her heart and her love of cooking grew from there.

“I loved baking, and that’s where I started to kind of modify to see, ‘Could I make this recipe a little bit healthier?’” Gilbert said.

Her husband works as a football and strength training coach at a local high school, and the two complement each other and round out the physical and nutritional sides of health. She expands his knowledge about food and diet, and enjoys seeing his reactions to her meals. Find out more about CPN’s Diabetes Initiative by visiting cpn.news/diabetesinitiative, and see what the FireLake Wellness Center has to offer at cpn.news/wellnesscenter.