Agriculture has always influenced Citizen Potawatomi Nation member Jeremy Bennett’s life. From being active in his local FFA chapter as a kid to assisting with the 2014 Farm Bill’s language as a young adult, he enjoys being involved with the industry.

“My upbringing, my roots and my passion is agriculture,” Bennett said.

“I have always been very interested in this field — my background is in Native American agriculture and environmental policy issues because both of them correlate to each other.”

For his master’s degree at Oklahoma State University, he focused on environmental policy and Native American health issues, linking both back to food concerns.

“I heard a lot about food deserts, and I wondered how it impacts minorities, and in particular, how it impacts Native Americans,” he said. “I started looking, and there is a lot more literature and research on food deserts in the ‘traditional reservations’ versus Oklahoma’s.”

This prompted Bennett to ask himself, “What kind of food scarcity or food insecurity do Oklahoma tribes have?’” After receiving his undergraduate degree in 2011, he began his charge to capture this much-needed data within CPN’s original jurisdiction.

“The study provided valuable information regarding the impacts of various national issues such as health, education, employment status and financial well-being within the Tribe,” he said.

Food security classifications for his study include without hunger, with hunger, moderate hunger and severe hunger.

His research indicated in 2013, around 30 percent of adults and 10 percent of children in Citizen Potawatomi Nation households were food insecure.

“There are different degrees and levels of food insecurity, but among households that were surveyed in CPN’s territory, over 35 percent of CPN households were considered food insecure to some degree,” he said. “This is higher than the national level of nearly 15 percent for all U.S. households.

“At that time, it was also higher than the national level of 23 percent for American Indians and Alaska Natives,” Bennett said. “Approximately 11 percent of those surveyed had food insecurity with hunger present.

“When examining various household characteristics among different food security statuses, obvious differences were observed,” he said. “It was no surprise that the food insecure households did not consist of any household that had earned a college degree or higher and had a household income level of $75,000 or greater.” 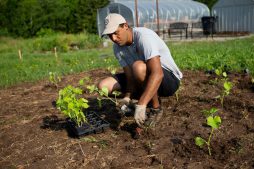 Kaya works in the community garden.

DeerInWater is a botanist, working toward a master’s degree at the State University of New York College of Environmental Science and Forestry (SUNY-ESF), where he studies under Tribal member Robin Wall-Kimmerer, Ph.D. Dr. Kimmerer is a pioneer in the field of botany. She combines scientific data and empirical, or long-term cultural and spiritual consideration, in efforts to restore and conserve land, communities and people’s relationships with the earth.

“I’m studying the community’s needs and concerns around Tribal food sovereignty and traditional plant knowledge,” DeerInWater said. “This is important because everyone needs to eat and, not to be cliché, but food is the best medicine. So many of our health problems could be solved with reconnecting with our lands and our indigenous food systems.”

Coupling the need for healthy foods with getting people outside doing physical activities is one of DeerInWater’s driving goals, he said. He hopes that applying his passions and skills will have a positive effect on cultural revitalization efforts taking place within the greater Citizen Potawatomi Nation.

“If you look at our ancestors, they were strong people. They made it through famines, and they made it through super harsh winters and blizzards. The rate of diabetes was nothing; cancer was practically nonexistent,” he said. “And all those diseases that we struggle with today as Native people — getting connected with our food and where our food comes from, especially for Native people, food sovereignty is a huge movement.”

DeerInWater’s studies while in Oklahoma include examining Cultural History Center archives and ancestral writings. He plans to speak with volunteers and community members about how and why they grow and eat what they do.

“The research part comes in because there are very little written records of Potawatomi plant use,” he said. “I am interested in empowering people to get them excited about learning from our oldest teachers — the plant nations. This can take many forms, from growing traditional heirloom crops in backyard gardens or farms to harvesting wild foods and medicine using the principals of the honorable harvest.”

He has big hopes for CPN’s community garden — and for learning more about the Indigenous concept of reciprocal restoration. He said plants are teachers, healers and elders.

“I am interested in ways to connect people with the land so that we can retain our connection with it,” he said. “The idea that really struck me is that if we have adapted, how have we adapted?”

While showing the Hownikan the current gardening efforts, he pointed to a plot where wooden markers list Potawatomi and English words for each plant. “I think these would be fun for gardening immersion with kids in language class,” he said. “Because that’s the way we learn — by doing.

“We’re planting Three Sisters (corn, beans and squash) over here on one of these plots, too,” he added. “That’s the thing about gardening. There are so many different ways to do it; so many different teachings.

“A lot of this garden is about educating people about gardening practices,” DeerInWater said. “Hopefully, that’s why, by having more volunteer opportunities, we’ll get more community members engaged and have a broader impact.”

Bennett enjoys seeing suggestions from his studies come to fruition and witnessing the CPN community come together.

“I’m so glad to see more community gardens, and Oklahoma is in a very unique position because of the cooperative extension that Oklahoma State University has in all 77 counties,” Bennett said.

“If they need advice on what to plant, how to plant, how to fertilize and site selection, that’s definitely stuff that we can provide either through workshops or one-on-one,” McDaniel said.

For avid gardeners, implementing Plant a Row for the Hungry encourages gardeners to grow extra that they “can take and donate to either a food pantry, school or church and be able to contribute that to others,” she said.

“We do have information that we can just give to individuals, and then we do workshops from time to time as well,” McDaniel said. “We do canning — water bath canning, pressure canning, freezing, drying — all the above.”

Bennett encourages CPN members out of state to reach out to their local extension agents for assistance.

“One of the greatest things I’ve learned (from Dr. Kimmerer) is that we need to shift our worldview away from one dominated by fear and resource extraction,” DeerInWater said. “It’s taught me a lot about creative ways to approach some of our Native community’s health problems and at
the same time care for Segemekwe (Mother Earth) in a way that is respectful to those ancestors’ traditions as well as kenomage (learn what we get from being on the land).”

Everyone can assist in food security efforts, whether that’s participating in the community work parties at CPN’s Gtegemen, reaching out to elected officials, volunteering at another local community garden or planting extra. A variety of options exist to get involved across all communities.