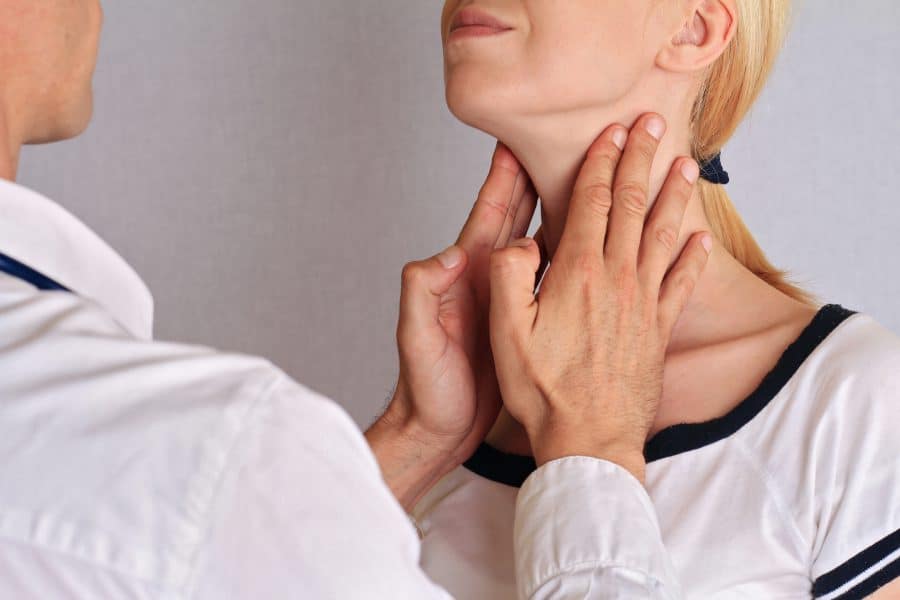 Like many Natives, Kristie White has an endocrine system that is not quite firing on all cylinders.

Spoiler alert: her pancreas is fine.

A Choctaw and Comanche resident of Ponca City, Oklahoma, White started noticing an internal shaking feeling, coupled with an almost non-existent libido and her heart constantly pounding. As a new single mother working full time, she initially chalked it up to the stresses associated with parenthood.

The thyroid is a brownish-red, butterfly-shaped gland found below the Adam’s apple in the front of the throat. It produces multiple hormones that act throughout the body, influencing growth, development, metabolism and the ability to regulate temperature.

With many of the symptoms of improper thyroid function mimicking those of other conditions, blood tests are needed to confirm whether the body is producing the right amount of T3, T4 or thyroid stimulating hormone, also known as TSH.

Dr. James Choe is an endocrinologist based out of Del City. A graduate of Yale and the University of Oklahoma, he regularly receives contract health referrals from Citizen Potawatomi Nation Health Services.

The most common form is Graves’ disease, an autoimmune disorder when naturally occurring antibodies bind to receptors on the thyroid’s surface and force it into hormone production overdrive. If left untreated, it can cause pregnancy issues among women, osteoporosis or heart disorders. According to the U.S. National Institutes of Health, an estimated 1 in 200 people across the United States have Graves’ disease.

Although the condition can run in families, Graves’ disease can be further exacerbated by regular commercial tobacco use due to its negative impact on the immune system.

“The biggest thing someone can do to help themselves if diagnosed with Graves’ disease is to stop smoking or just not start altogether,” Dr. Choe said.

Conversely, hypothyroidism is when the thyroid does not produce enough hormones, slowing down the body’s processes. That leads to some of the more common symptoms, including weight gain due to a sluggish metabolism, fatigue, memory issues and depression.

An estimated 4.6 percent of Americans age 12 and older have hypothyroidism. It is more common in women, especially those 60 and older. The wide range of causes includes family history, autoimmune disease, radiation treatments for other conditions, or at least outside of the United States, having consistently inappropriate iodine levels.

Statistical data on the incidence of hypothyroidism among American Indians is scant. However, diabetes and autoimmune diseases, which disproportionately impact Indigenous communities, are risk factors for developing hypothyroidism. Additionally, if left unchecked, hypothyroidism can increase the risk of developing diabetes.

With a family history of thyroid cancer, White was specifically diagnosed with Hashimoto’s disease. A form of hypothyroidism, Hashimoto’s is an autoimmune condition where the thyroid is chronically inflamed, thus impairing its ability to produce hormones and a decline in overall functions.

There is not a cure for hyperthyroidism, but it can be treated with daily medication. However, as Dr. Choe noted, it needs to be taken by itself at the same time every day in order to be truly effective.

“That medication is very sensitive to trace minerals in other pills or in food,” he said.

Meanwhile, White is keeping close tabs on not only her thyroid health but that of her children as well. After an extended period of taking Synthroid, or levothyroxine, with other pills, she regularly takes her medication by itself in the morning. She has also joined a gym in an effort to lose the weight put on while her metabolism was off-kilter, but it has been slow going.

“I have to force myself to take my medication daily,” she said. “I discovered I was taking my medication wrong. After separating it out and making sure I don’t eat for at least 30 minutes, it has helped my energy levels.”