Beginning of the end of Citizen Potawatomi displacement

Beau Favre built his life around a passion for the outdoors. He uses it to plan his future, get closer to his relatives and align himself with his Potawatomi heritage. A descendant of the Peltier and Bostick families, his lineage provided him the opportunity to apply for the Native Teen Guide-in-Training program held by the Utah nonprofit Canyonlands Field Institute.

“It’s addictive to me. It’s really, really addictive,” Farve said. “No matter where I go, I’m always outside. There’s always something drawing me outdoors.”

CFI chose 14 participants entering grades eight through 12 for a six-day adventure which included rafting 24 miles of the upper San Juan River between Bluff and Mexican Hat, Utah. The water marks the edge of the Navajo Nation with the tribal land to the south.

The trainees worked on their guiding, leadership, public speaking, safety and technical abilities. They also learned about the cultural and natural history of the land. Favre said guides possess enhanced communication and social skills.

The program “was talking a lot about always being positive, looking on the bright side of things, because if you’re looking up, then the people in your boat are going to be looking up,” he said.

Favre practiced camping and other outdoor activities including fishing, canyoneering, hiking and, of course, rafting. He considers himself an avid angler, and he spent time deep-sea fishing in Florida over the last few years. Favre reeled in dinner with family members as a child, and he still enjoys the “super fun tug-of-war.” No one brought fishing equipment on the river in Utah, so Favre made some out of a shrub and a bit of fishing line.

“Coyote willows are so flexible but strong that I fastened it actually to the end of the rod. I put two of them to make eyelets, and I was fly-fishing with it. I caught one. It was actually a pretty good size. It was probably a 14-inch catfish. It was a lot of fun to fight,” he said.

The participants took turns guiding each other as they rafted. As a large part of the curriculum, the guides-in-training learned how to navigate several classes of rapids while spotting rocks and obstacles. The San Juan River’s high silt load combined with stretches of shallowness made the water less clear and portions of it difficult to maneuver.

“I really think I did pretty well because it’s not like we got stuck or bumped into anything,” Favre said. “There were a few (rocks) we could barely see and that we ran over, but it’s nothing that got the boat stuck, and that usually happens a lot.” 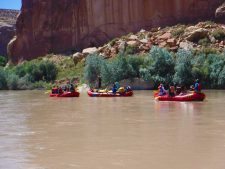 Each of the teen participants leads the group down the river and through some rapids. (Canyonlands Field Institute)

Favre made lifelong friends floating the river. As the only Potawatomi, Favre taught them Nishnabe and Ojibwe traditions while learning about Navajo customs and a few words of the language. They all shared songs from their tribes with one another, cooked together and slept underneath the stars the last night of the journey before heading home the next day.

“Probably the most important thing was the camaraderie between all of us. We were all close,” he said. “After the first day or so, we were all working as a group and as a team. It was really important to work together, and we all cared about each other and helped each other out, too.”

Showing off one of his camping backpacks, he explained outdoorsmen often place stickers on their bags representing their different experiences. Right now, his only has two — CPN’s seal and Fort Lewis College’s logo.

“I think that’s something very important in life,” he said. “You should always know where you’re from and where you’re going.”

Combining his love of nature and knack for getting to know people, Favre plans to study adventure education at Fort Lewis College in Durango, Colorado, after graduating from Tecumseh High School. He wants to become either a tour guide or a park ranger, and he feels the program helped prepare him for either.