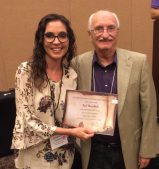 Editor-in-Chief of Balkan Press Lara Bernhardt presents Paul Wesselhöft with his award for his work Sophie.

“This was my first attendance at a writer’s conference, and I’m grateful to the judges for selecting me,” Wesselhöft said. “Writers need encouragement, and this acknowledgment will drive me to write and publish more.”

Wesselhöft noted that the short story will be published in an upcoming edition of the literary magazine Conclave. As part of the first place award for Sophie, the CPN member will also sign a contract with Balkan Press, who publishes Conclave.

Though he specializes in fiction and short stories, Wesselhöft is an avid writer of poetry as well.

He is also the author of two books. Eros: Penultimate Love is a book of poetry sharing one man’s expressions on life. The Redfeather Pentalogy is the fictional account of a Potawatomi child growing up in Oklahoma in the 1950s after the failure of his parent’s marriage.

A native of south Oklahoma City, Wesselhöft graduated from U.S. Grant High School before entering an 18-year career in the U.S. Army. During almost two decades as an Airborne Ranger Chaplain, Wesselhöft ministered to soldiers through the Vietnam and Gulf War eras. He retired in 1995 as a major. From 2004-2016 he served in the Oklahoma House of Representatives for District 54, encompassing south Oklahoma City and Moore.

He is also currently a member of the Citizen Potawatomi Nation tribal legislature.

To learn more about his writing and works, please visit paulwesselhoft.com.