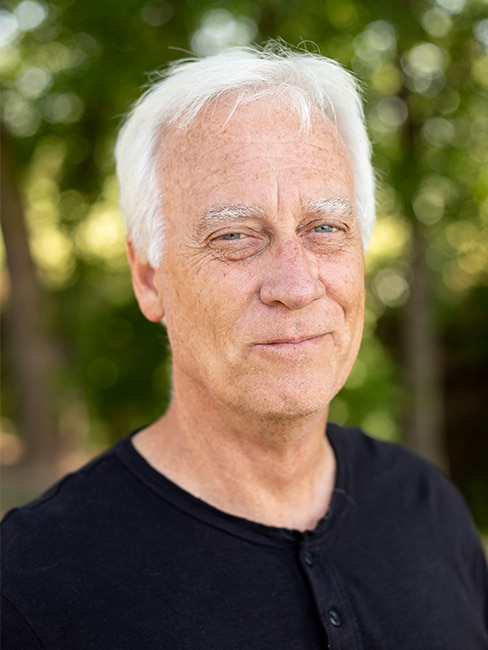 “You build those relationships with students over the years, and that’s the most important thing,” Higdon said. “That’s probably what will keep me working even though I don’t have to, is the students.”

Growing up in Pottawatomie County, Higdon has always stayed connected with the Tribe. He fondly remembers when CPN headquarters was housed in the small, white trailer as well as the groundbreaking on the FireLake Golf Course.

“I had never seen a golf course before, and it’s fun to look back on those very modest beginnings,” he said.

In the early 1990s, Higdon served on the CPN Grievance Committee.

“I am proud to say there was never a grievance when I was on that committee,” he said. “If there had been a grievance, we would have met and resolved it, but there wasn’t.”

Today he enjoys helping students across Pottawatomie County, Oklahoma, learn and develop valuable skills while introducing them to the wide range of potential courses of study or training after high school.

Higdon’s career in education spans decades. He served 24 years as a coach, teacher and administrator and 13 years at the State Regents for Higher Education.

“Almost my entire life has been a series of accidents,” explained the Mueller descendant. After he graduated from high school, pursuing a degree was not on his radar, but he went with a friend to visit Seminole State College.

“The college adviser asked me, ‘What are you going to do?’ and I didn’t know,” he said. “Long story short, I ended up enrolled in college.”

A local grocery store employed him part-time while he attended Seminole State. In the late 1970s and 1980s, he was able to pay for his college on his part-time pay, which is unheard of today. He eventually transferred to East Central University in Ada. Although unclear of what he wanted to do when he graduated, ECU faculty encouraged him to pursue a degree in education.

When he graduated from ECU, he became the first person in his family to receive a degree. While Higdon did not plan to become a coach, he accepted a teaching and coaching position at Altus Public Schools after graduating. The experience was so enjoyable for him that he started to fine-tune his coaching skills. The time with students also inspired him to pursue a master’s degree at ECU.

He later taught and coached at Jones High School and Tecumseh Public Schools before he received a phone call about applying to become an administrator at South Rock Creek Public School.

From 2002 to January 2006, he served as the district’s principal. While there, Higdon’s phone rang again. A friend and former mentee called to offer a career opportunity as a field-based coordinator at the Oklahoma State Regents for Higher Education.

“I ended up with that position, and I enjoyed that a lot,” Higdon said. “I stayed there for a few years, and then they made me the assistant director of student preparation.”

The department eventually promoted him to director of student preparation, and he served in that role for three years.

“I spent 10 years working as a field coordinator in student preparation, and honestly, it was just fun,” he said. “I never got mad at anyone, and no one ever got mad at me. I got to travel all over the state and work directly with teachers, counselors and students, so it was nothing but fun.”

While Higdon served as director, the State of Oklahoma was experiencing large budget deficits that affected funding at all levels of the state’s government and departments, including the Oklahoma State Regents for Higher Education.

“I felt that the department is integral to the success of students in the state of Oklahoma,” he explained. In his role, he employed various strategies to help decide funding levels for the programs and initiatives under his umbrella.

Although making budgetary decisions was difficult, he helped initiate programs across the state that assist tribes with creating the infrastructure needed to provide their citizens additional support regarding higher education. Using the State Regents data, he developed a report detailing the millions of dollars tribal scholarships contribute to Oklahoma’s public institutions.

“It really made them stand up and take notice, and from that moment on, there have been some really good things done between institutions and tribes,” Higdon said. “I would say it was real exciting for me to be a part of that — building those tribal partnerships.”

Before CPN developed the Department of Education, Higdon spoke to CPN Vice-Chairman Linda Capps on several occasions about state of education across Oklahoma. During these conversations, Vice-Chairman Capps asked him when he would retire and come to work for the Tribe. In 2018, he did just that.

“I’m retired, but I work more than I did when I was ‘working,’” Higdon said, then laughed.

In fact, he only had one month off after he left the State Regents before coming to work at CPN. The opportunity to make profound changes in students’ lives keeps him from taking it too easy.

Higdon recently accompanied youth from Wanette on the Native Youth Community Project’s visit to Oklahoma City Community College, and for many, it was their first experience on a college campus.

“There’s the old saying, ‘You can’t be it if you can’t see it.’ Well, how much can you see in Wanette, Oklahoma?” he said. “If we can broaden that scope and let the students see a lot more potential on what’s out there and get them excited about it, they are much more likely to persist.”

He also focuses on helping students build the skills required to be successful, including finding support systems to fall back on when things get difficult.

“We cover a broad range just trying to prepare them for more than what they’re going to get out of just the regular school preparation for college,” Higdon explained.

The CPN department of education staff utilizes free online resources provided by the Oklahoma State Regents at each school it serves as well as ACT testing assessments that offer an overview of students’ social and emotional feelings around test taking and facing adversity.

“It’s almost easy to get anyone in college, but it’s harder to keep them in,” he said. Being able to discuss testing strategies and coping skills based upon these findings helps students develop a solid foundation to carry them through their college and professional careers.

Higdon does plan on one day truly retiring, but until then, he looks forward to the chance to make long-term, positive changes in the lives of students across Pottawatomie County.

“My goal is to just have as much interaction as I can with the students and hopefully offer some sage advice that maybe helps them find what they’re really passionate about and that they can accomplish something from that,” Higdon said. “My goal is to help them achieve theirs.”

Learn more about the CPN Department of Education at cpn.new/education.