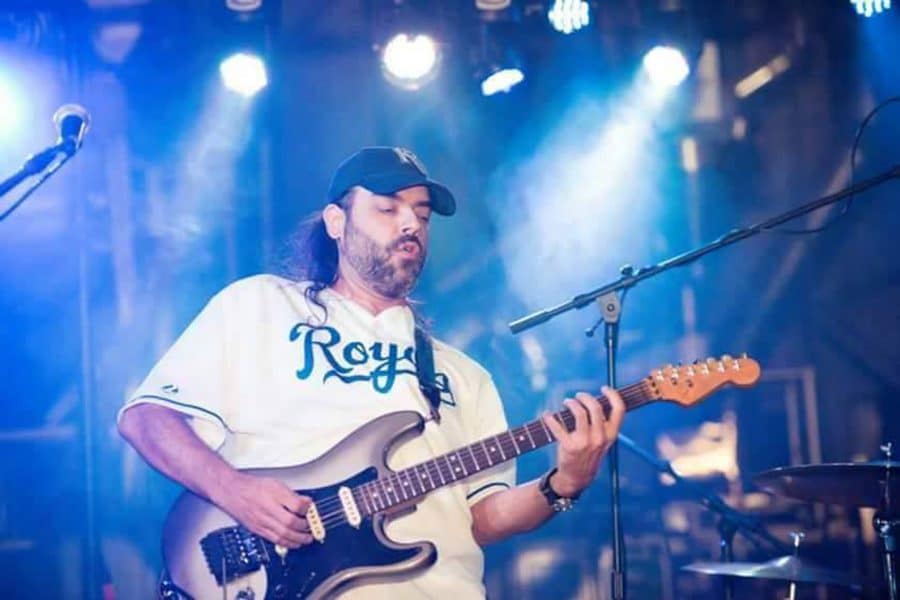 In a recent interview with the Hownikan, Kansas City musician and Tribal member Scotty McBee gave an interesting answer when asked about his influences and favorite bands.

McBee loves jazz, progressive rock, country, hair bands and acoustic artists. Besides Carlin and Zappa, all kinds of artists and world figures including Kiss, Rush and the Beatles have influenced McBee’s decadeslong career and philosophies.

He is proficient with several instruments. His father was a guitarist and started teaching McBee at 4 years old. He began studying drums at 6 and focused on jazz in college. In 1996, he graduated from the University of Missouri Kansas City with a bachelor’s in percussion performance. He takes an academic approach toward music; however, he now mostly plays rock ‘n’ roll and acoustic.

McBee performs with approximately 40 acts a year, gives private lessons at his home, owns and operates a recording space called Upper Deck Studios and regularly plays in three bands, which he created. He credits his wide breadth of knowledge and flexibility for his success.

“I really wanted to be a baseball player, but I didn’t choose music. Music chose me,” he said.

McBee’s longest standing project is Troubadour Retrievers. In 2002, he started the band to host Jerry’s Jam Night every Wednesday at Jerry’s Bait Shop, a local venue and restaurant. February celebrates the 17th anniversary of the event. They call themselves “Kansas City’s Ultimate Live Jukebox,” and their songbook consists of more than 500 tracks. During the event, pub patrons pick out a tune and sign up to play an instrument or sing live with the group.

The open mic became a success within a year. When the restaurant owner opened a second location, the Troubadour Retrievers began playing two nights a week. Over the years, the jam built up a steady stream of regulars.

Through Jerry’s Jam Night, McBee has witnessed entire bands form that go on to book gigs of their own. Some participants get inspired to pick up their instruments again. Others begin their careers, including guitarist Brandon Miller who started attending Jerry’s Jam Night at 13 years old. He studied music in college and now travels with the internationally known Danielle Nicole Band.

They named themselves after their mutual love of dogs and singing, and McBee’s girlfriend designed their logo. They eventually made themselves available for hire and decided to welcome others on the stage only at open jam nights. They now play shows ranging from weddings to corporate events across several states.

McBee also co-writes songs and performs with his friend Crystal Gatewood. They formed an acoustic duo called Beauty & the McBeest. The two met when Gatewood hired Troubadour Retrievers for a New Year’s Eve party. He says they quickly became best friends with compatible musical interests and style. McBee began teaching her music theory, and they started playing together.

“I asked her, ‘Have you ever thought about writing songs?’ and that opened the floodgates,” he said. “It’s just kind of this, like, a divine intervention kind of thing. It’s, like, how on earth? It’s like we were meant to meet that night.”

They perform at venues around Kansas City. They released their first album, Acoustic Sessions in the Living Room, in 2017. They are working on their second album now. McBee professionally produces the tracks in his studio, half of which are jazz. It features a wide array of guest musicians from the area on the steel pan drum, fiddle, flute and a variety of brass and woodwind instruments.

McBee has spent a lot of time as a member of several different tribute bands in the Kansas City area as well. He performed as Gene Simmons from Kiss for 10 years and as Richie Sambora of Bon Jovi. He currently plays the part of Don Barnes in Special Forces – Salute to .38 Special.

During his time as a Boy Scout, McBee learned the significance of constant preparation, and he applied that lesson to his career.

“If you want to make your living at this, you have to wear a lot of hats and play calendar Tetris. But ultimately, preparedness meets opportunity,” he said. “So again, here’s why I promote, if you’re going to be a musician, and you’re going to be prepared … know your stuff.”

McBee believes in taking a serious, educated approach to music. This includes knowing the basics of the 12-tone system, rhythm structure and ear training to master an instrument completely.

“Of course, I look at each thing as a special thing in terms of style, in terms of sound, interpretation, all of that, but underneath it all, it’s the same 12 notes that have existed in Western society for hundreds of years. And if you understand that, you can do whatever you want.

Over the years, McBee noticed his students putting forth less effort. He said they wanted to be onstage more than learn how to play an instrument, and it frustrated him. Throughout his teaching career, McBee saw many people give up after not anticipating the hard work and dedication.

“Being a musician or an actor or anything, there was a time that we were tradesmen and an important part of things, and you were prepared. You were a professional,” he said. “Now everybody and their brother does these things. We’re kind of left with our obsession with stardom that either somebody is really famous or … they’re just nothing. It’s just tragic.”

He also believes in a difference between talent and aptitude. Commitment and time spent on a craft is more worthy of praise than talent, according to McBee.

“I don’t just believe in talent. I believe in skill. So you know, when they say ‘talent,’ I was like, ‘That’s a product of hard work. That’s not talent,’” he said. “But nevertheless … for those who can really play music well, I refer to it as aptitude.”

Those students with natural ability and mismatched willpower disappointed him. Either way, music, much like sports, is about the experience, said McBee. End goals are important, but the most important is mindset.

“The point of a journey is not to arrive. I’ll be done growing as a musician when I’m dead. That’s the only way to do it.”