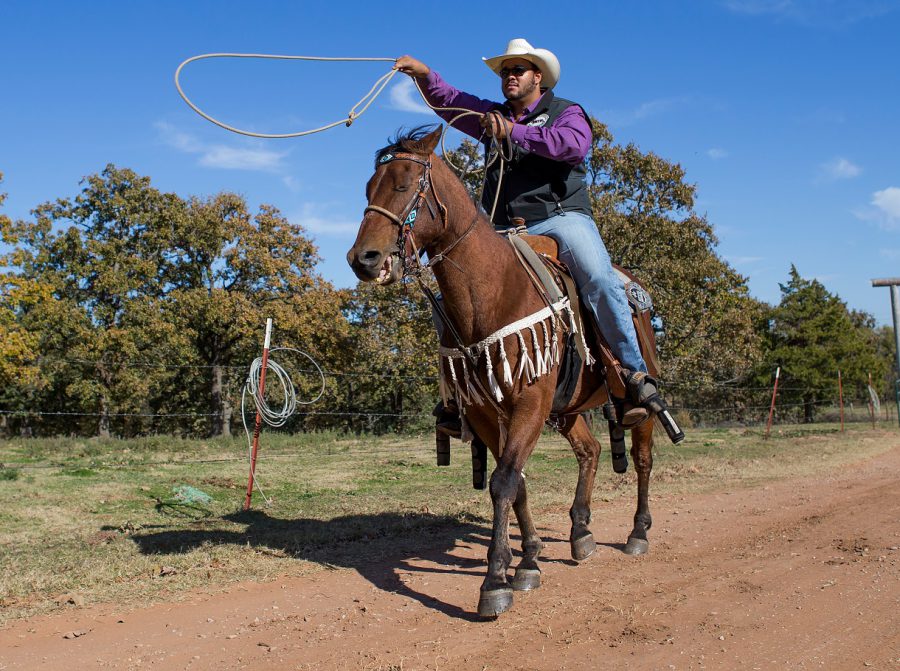 Connor Osborn shows off roping skills at his grandfather’s farm in Tecumseh, Oklahoma. Connor Osborn shows off roping skills at his grandfather’s farm in Tecumseh, Oklahoma.

“Shoot, I’m 25 now, and I’ve probably been riding a horse since I was in diapers. Literally,” said professional calf and team roper Connor Osborn.

He grew up on his family’s farm in Oklahoma, where Osborn watched everyone participate in their favorite rodeo events.

“My mom and my aunt and my cousin and all them, they barrel race,” he said. “My dad roped a little bit and bulldogged.”

He decided on his favorite rodeo events to participate in at a young age — calf roping and team roping.

“When everyone else was wanting to grow up and be doctors, lawyers, firemen and police officers, I just wanted to be a cowboy when I grew up,” he said.

He began competing professionally while attending Tecumseh High School. After he turned 18, he bought the permits for pro rodeos to compete in team roping.

“(I) went through the high school and the college ranks and amateurs and got into the professional rodeo a little bit,” he said. “Just to get my feet wet there.”

He graduated from Northwestern Oklahoma State University in Alva with a Bachelor of Science in agriculture, and Osborn now competes in both team and single roping events professionally to make a living.

The Citizen Potawatomi Nation member said anyone could rope — it is all about making it work.

Osborn is 6 feet 5 inches tall and bigger than many of his competitors. He said it is important to study someone who is the same height and body size.

“I can’t go and learn from somebody that’s small,” he said. “My legs are longer; my arms are a lot longer. I might be stronger, but they’ve got the technique.”

Osborn did not have one teacher, but rather learned from several different people. When he was younger, he picked up riding tips and tricks from family and friends and competed in junior rodeos.

“In the rodeo world, everybody has their own style,” he said.

He also taught himself to rope left-handed after breaking his wrist when he was about 10 years old. As a teen, Osborn spent hours roping a dummy to master his swing.

“I would get calluses on my hands,” he said. “I’d rope the dummy for three or four hours, and I’d burn holes in my glove.”

To improve now, he and other ropers record competitions and send them to each other for critique.

He remembers his first time competing when he was 7 years old.

“I got to rope at one of my grandpa’s rodeos. Finally got my dad talked into letting me rope,” he said.

Osborn placed and won some money, which was a big deal at the time. Now that he earns a living participating in rodeos and smaller equine events across the country, his philosophy has changed. It is all about finding a balance between bragging rights and making ends meet.

“Why risk making a thousand when you can make eight hundred? Seven hundred?” he said. “You can guarantee you to make money, so why not just make money? Be smart about it.”

Many people welcomed Osborn across the country throughout the years, especially when looking for a place to plug in his trailer and stable his horses. He still talks to equine program director and head rodeo coach Jake Lawson from Connors State College in Warner, Oklahoma, years after attending there and transferring.

“They’ve always been good to me, and I get to go there and practice whenever I want if they’re there and help their guys out, their kids,” he said.

Osborn passes on his horsemanship skills to the next generation of steer ropers and barrel racers knowing he was in their shoes not long ago.

While on the road, he became acquainted with many professional ropers — some he admired as a child, like Derrick Begay, Russell Cardoza and Dustin Bird.

“It is just cool to hang out with them and meet a whole bunch of new people along the way,” Osborn said.

He cherishes the people he meets on the rodeo circuit, and some of them feel like family.

“The people that I stay with in Florida, they were very welcoming, and we call them all mom and dad,” he said. He splits duties with them to help run their farm to reciprocate the generosity. His horses are also important members of his rodeo family. He owns eight horses and trained six of them to rope, including Vegas and Sophie.

“They were just broke to ride,” he said.

He took them to Florida at the beginning of the year for pro competitions. Two of his other horses, in particular, stand out: Jetta, 17 years old, and Red Cloud, 18.

“I can always go to my old faithfuls,” he said. “I’ve had them since I was in junior high rodeoing.”

Jetta was four years old when Osborn first learned how to ride; his family purchased her from friends.

“No matter what was going on, she wouldn’t spook or nothing,” he said. “It was just kind of like a babysitter, really.” Injuries accumulated over time — nearly losing a thumb, dislocating an ankle, tearing knee cartilage. Osborne knows the risks in this line of work. The damage is not a hindrance, and occasionally, earning a living trumps doctor’s orders.

He won stirrups in Florida last year. He also owns saddle trophies proclaiming him “Champion All-Around Cowboy” and “Champion Tie-Down Roper,” as well as a wardrobe of contestant’s jackets from events such as the Indian National Finals Rodeo.

“The real character comes out whenever you haven’t won in six months or whatever, and you’re down in that hole,” he said.

He strives to be a good role model for future ropers and considers how he presents himself at public competitions. He also thinks about Citizen Potawatomi Nation and his family while competing, realizing his behavior reflects on more than himself.

Osborn is a member of the Motley family. He is thankful for the Tribal college scholarships he received a few years ago and the rodeo sponsorships he receives now. He continues to travel because of them.

Osborne said he will steer and calf and team rope for as long as he is able.

“It’s a really humbling sport,” he said. “And the people are too.”