Roll of the dice now available in Oklahoma tribal casinos 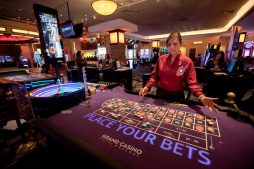 Real craps and roulette games are available at the Grand Casino Hotel & Resort after a change in state law took effect in August 2018.

“We looked at the page and said, ‘We need to be on this,’” Brand recalled. “This phone call set in motion a chain of events that allowed us to begin offering ball and dice games on the first day it was legally possible.”

After calling the Chickasaw casino to confirm, Brand and other Grand Casino staff contacted CPN Gaming Commission Executive Director Daniel LeClaire and Tribal attorneys to authorize that they could legally offer the games at the CPN facility. Following approval, Grand Casino staff put months of planning into action in less than two hours.

“Thankfully, our staff had been preparing for this moment since April 6,” said Brand. “Our table games crew arrived for their 6 p.m. shift not knowing they would begin throwing balls and dealing dice that night. It was incredible seeing the preparation and training pay off immediately by making the switch to ball and dice that night with only a two-hour notice.”

It’s difficult to find out why, in a state saturated with many forms of gaming, the presence of a ball and dice somehow makes a game of chance more taboo than one played with cards or on a video screen.

The 2004 tribal-state gaming compacts approved slot machines and most table-played card games, among others. However, they prohibited ball and dice games including craps and roulette. The reasoning behind the exclusion remains unclear given the minimal difference between pushing a button, shuffling cards, spinning a wheel and rolling cubes.

Current statistics show there is approximately one slot machine for every 52 residents in Oklahoma — a high ratio that may increase in coming years according to recent market analysis by Eilters & Kreijcik Gaming. These figures do not include other forms of legalized gaming available in the state such as table games like blackjack and poker.

Sheila Morago, executive director of the Oklahoma Indian Gaming Association, provided some insight on the original prohibition of real craps and roulette.
“When the State of Oklahoma passed the legislation, which allowed for tribal gaming to begin, it was done by a vote of the people. What was included in that original vote was limited in scope, partly because it was such a new idea for Oklahomans,” she said.

Despite the financial boon that tribal gaming brings to Oklahoma in terms of state exclusivity fees, legalized gambling remains a relatively recent phenomenon in the state.

“Tribal gaming in other states has grown in much the same way — initially starting with fewer offerings and adapting and expanding as the need for a wider variety of gaming and entertainment options grows,” Morago said. “Tribal gaming is an industry which is always evolving and changing to meet the needs of its audience.”

As a result of the 2004 compacts’ prohibition of ball and dice, tribal gaming operations developed their own ways to adhere to the letter of the law while diversifying the games they offered. In the absence of traditional craps and roulette, “bonus craps” and “bonus roulette” emerged — versions of the games played with cards instead of a pair of dice. In some tribal casinos, a video game adaptation includes a virtual wheel spun for roulette.

The ball and dice versions are similar to more traditional varieties available in Las Vegas or Atlantic City. The only difference is that they are non-house-banked. Instead of competing against the house, players at Oklahoma tribal casinos play against one another with winners paid out of a pool.

The emphasis on the change in Oklahoma’s approach to ball and dice in 2018 centers on the state government’s continually poor performance in funding for education.

In 2004, Oklahoma voters approved the state lottery and tribal gaming as a way to increase education funding. In practice, the majority of gaming and lottery revenues went to general education. However, tax cuts on the state’s top earners dwarfed the amount put into education coffers, resulting in a shortfall. A report by the Oklahoma Policy Institute showed that $189 million directed to common education in 2016 could not make up for the $356 million deficit that resulted from the state’s top income tax rate cut.

In 2017, Citizen Potawatomi Nation paid more than $4 million in exclusivity fees to the state. Oklahoma collected $134 million from compacted tribes for the same year.

Throughout the spring 2018 legislative session, educators from across Oklahoma protested at the statehouse against annual funding shortfalls in education compared to rising costs and enrollment numbers. In this atmosphere, legislators passed HB 3375. Though it would not add revenue in 2019, the bill would fund future budgets following its enactment.

The debate on its passage was not without critics. Some argued the addition of ball and dice games could increase gambling addiction. Others said that despite tribes remitting $134 million in exclusivity fees to Oklahoma from Class III gaming in 2016-17, HB 3375 was a bad deal for the state. Those against the bill believed the projected $22 million in fees made from roulette and craps would not be enough.

“In my private life, I am paid to negotiate. I would not bring this deal to one of my clients without expecting to be fired,” said Senator Anthony Sykes of Moore, Oklahoma. He introduced an amendment to the bill attempting to increase the state’s exclusivity fees to get a larger portion of funds made from the games. It ultimately failed.

“We followed every bill and vote with anticipation,” said Leggenhager, who is a Tribal member from the Pecore family. “We researched resources and vendors to plan logistics and timing.”

On April 10, Governor Mary Fallin signed it into law, but tribes had to await final approval from the U.S. Bureau of Indian Affairs.

“Once the vote passed, (Grand Casino) General Manager Joe Garcia made sure we had the necessary resources to succeed in the decision by the Tribal leadership to race to market with dice and balls,” Leggenhager said.

“You’re getting ready to head home for the weekend and then something big happens. It’s always on a Friday,” the Grand Casino’s Brand said, talking about the day he learned the BIA approved ball and dice games. “My floor manager notified me as we were winding our day up, but we knew we had to get our games going.”

Following HB 3375’s signing in April, the BIA put it through a mandatory review to ensure it met the tenets of the compact. However, no one knew exactly how long it would take to get approval. The only notification was a posting to an obscure BIA website page, and only a few tribes initially discovered the announcement.

“When I went to the BIA page, I didn’t know where it was. I never saw it,” Brand said.

After the law’s passage, two separate sets of preparation took place at the casino. Leggenhager and Brand said they relied heavily on their fellow Tribal employees from other departments during this time.

Learning how to run the games required hours of training, sometimes from fellow dealers and floor staff with experience in games that never existed in Oklahoma prior to 2018.

Table Games Shift Manager Seth Kubiak actively searched for qualified employees to operate the games following BIA approval. Once hired, table game staff went through rigorous preparations. CPN Gaming Commission Executive Director Daniel LeClaire worked closely with casino staff to establish both Tribal standards for the games and obtain training for them by qualified professionals. Table Games Trainer Jami Seversson-Jones coordinated in-house practice, relying on two current employees, Scott Freeman and Scott Marinucci, who had prior experience with live craps and roulette. With Seversson-Jones, they instructed on how to properly throw a roulette ball and manage game play. According to Leggenhager, their contributions went further than that, as training time ate into their normal floor duties.

“Both Scott Marinucci and Scott Freeman made many sacrifices of time and finances to assist Jami in training two craps crews and 60 plus roulette dealers,” noted Leggenhager.

Concurrently, a second set of preparations took place in the form of building the physical infrastructure for roulette and craps.

Tribal employee and CPN member Matt Cheatwood, a carpenter and maintenance worker at the Grand, hand built the games’ tables. Employees Starsha Lilly, Severson-Jones and Kayla James coordinated on securing supplies and vendors. Both efforts, according to Leggenhager, saved the Tribe thousands of dollars compared to other options available on a tight timeline.

“Ultimately, the combined efforts of the staff and management overcame countless obstacles and achieved the directive of opening these very different games at the very first possible moment,” he said.

On Aug. 17, their preparation came to fruition. The gaming commission approved regulatory framework within an hour, and casino patrons played craps and roulette that evening.

Close collaboration by the casino’s executive staff, floor, table games employees, the Tribal attorney’s office and CPN Gaming Commission were integral in getting the games live in less than a two-hour window on a busy weekend night. Brand attributed the seamless transition to a “great team and a lot of hard work.”

As for roulette and craps reception from customers, the response has been largely positive. Though there is slightly different equipment, the similarities to those earlier versions played at the Grand have regular customers interested in trying real craps and roulette.

“None of the odds change in the game,” Brand explained. “They’re essentially the same (as when they were played with cards), but people love to hold and throw the dice and watch where the roulette ball will drop.”

Brand said roulette has not caught on as quickly as craps, but staff have noticed an uptick in interest. After more than a decade without what many would consider essential facets of the games’ entertainment, he believes it will take time for customers to become more comfortable playing.

“Once people get used to it, we see it growing in popularity with our customers,” he said.

Currently at the Grand Casino Hotel & Resort, one craps table is open seven days a week from 4 p.m. to 3 a.m. On weekends, a second table is available, but patrons must start signing up on a waiting list at peak times from 8 p.m. to midnight. Bets range from $5 to $1,000.

Learn more about the offerings by visiting grandresortok.com or stopping by at 777 Grand Casino Blvd., Shawnee, OK, 74804.