Red Willow is a flightless yet fearless family member 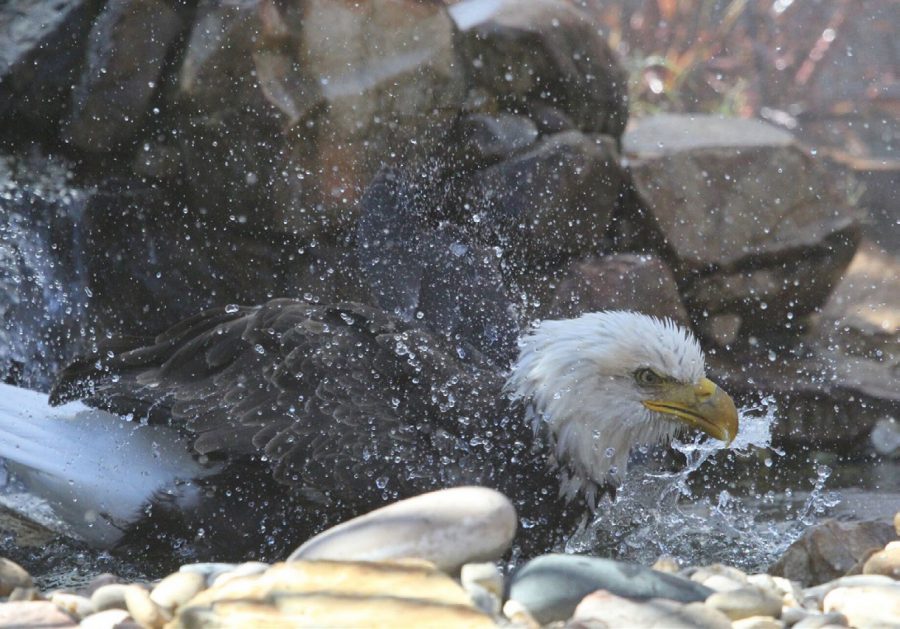 Mskwabimesh loves splashing in the water to keep cool.

Mskwabimesh loves splashing in the water to keep cool.

According to Potawatomi heritage, eagles are a sacred and important animal. They are prayer warriors who carry prayers up to the Creator.

But what happens when an eagle can no longer fly?

Mskwabimesh (Red Willow) is a five-year-old amputee residing at Citizen Potawatomi Nations’ Eagle Aviary in Shawnee, Oklahoma. As an eaglet, the bird likely fell out of his nest and broke his wing. He was found in Nebraska and immediately taken to Raptor Recovery for treatment, where his wing tip was removed.

“He had to have a second surgery to help the wing heal better,” said CPN Eagle Aviary manager Jennifer Randell. “Raptor Recovery offered him up for placement through U.S. Fish and Wildlife and when no one spoke up for him, CPN agreed to place him.”

Because of his disability, many facilities refused to place Mskwabimesh because of potential problems that might arise after removing a portion of his wing. Had he not found his current home at CPN, Randell said that he probably would have been euthanized.

Unfortunately, after arrival and a follow-up veterinary screening, Mskwabimesh had to have a third surgery at Boren Veterinary Medical Teaching Hospital in Stillwater, Oklahoma to amputate his wing all the way up to the elbow.

“The follow-up treatment was carried out at the aviary under the guidance of our eagle vet Dr. Staci Roberson,” Randell said. “Because of the reluctance to heal, we packed the bandage with raw unfiltered honey. The wing healed fantastically and he has adjusted well to his injury.”

“The approach we take to caring for the eagles encompasses all the tools we have, from traditional to modern medicine,” she said. “We feel like it takes both some time to address their injuries.”

Randall said that, normally, they would never perform that drastic of a wing removal on an adult eagle that could previously fly because it would negatively affect its quality of life. However, Mskwabimesh was still young and had never experienced flight.

Mskwabimesh did, however, experience a complete Potawatomi naming ceremony. Randell said his name was chosen because of the willow tree’s resilience and its love for water.

“The willow is used for the framework of our lodges and wigwams and is strong,” she explained. “No matter what happens to the willow, it comes back and flourishes.”

Randall said Mskwabimesh is no different from any other eagle at the aviary. Although he may have a different set of challenges, he’s adjusted to them.

Mskwabimesh can reach higher perching than anticipated and, true to his name, he loves water. Aviary workers said he takes the biggest bath of all the eagles in his enclosure and oftens jump into the basin without even wading in.

“He still has purpose and the only thing he can’t do is fly,” she said. “He is part of our Potawatomi family.”